William Simpson: The Storyboard Artist Behind Game Of Thrones 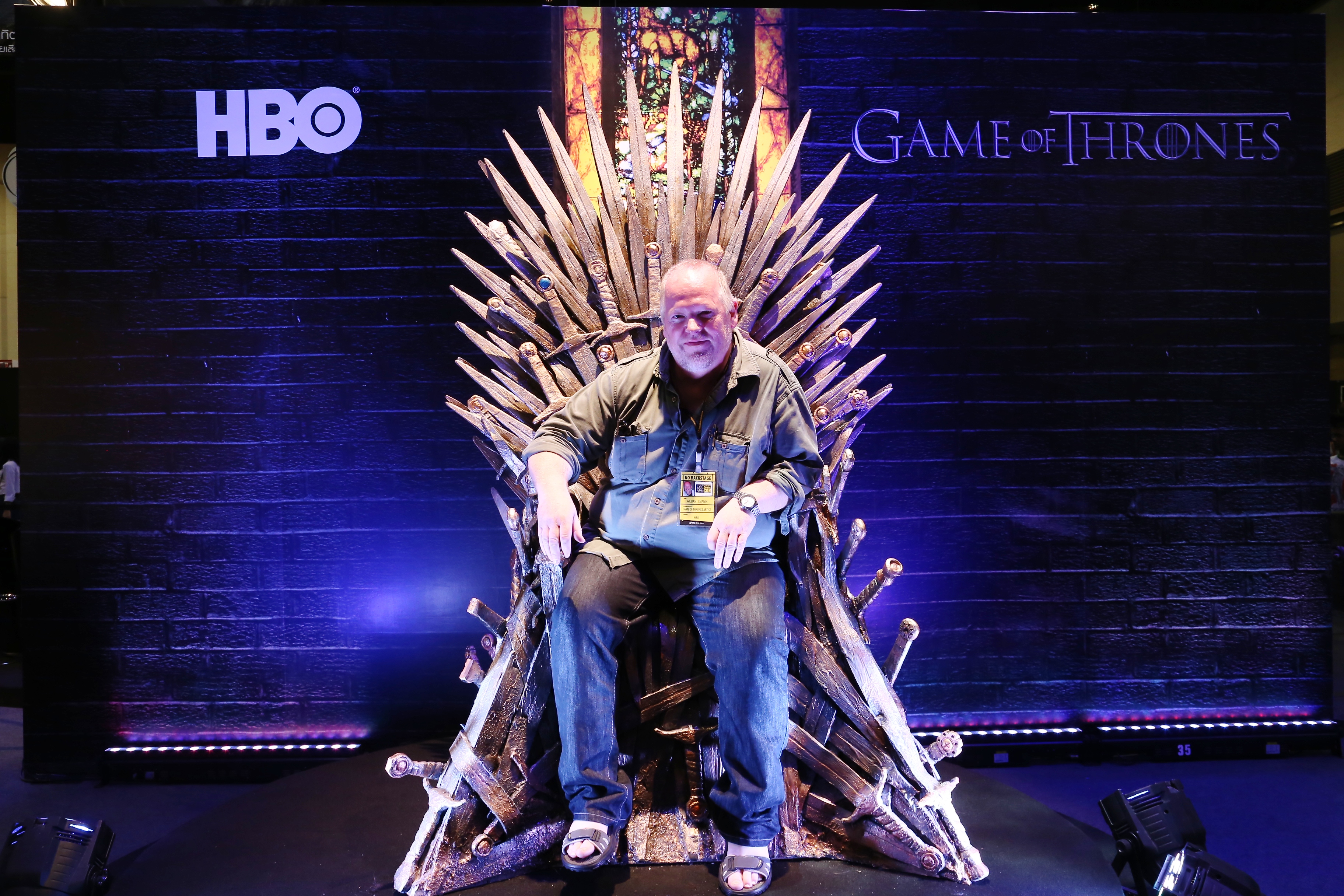 Thank goodness for HBO. As we eagerly await George R. R. Martin’s sixth novel (The Winds of Winter), we now have something else to look forward to: the upcoming fifth season of Game of Thrones. It premieres this April, and recently, its storyboard artist, William Simpson, was in town to talk about creating the fantasy world behind the series.

You might be wondering: what does a storyboard artist do? Well, their main role is to work with directors on translating the look and feel of the show into a visual comic strip, which lays the groundwork prior to the start of filming. Fans of the Game of Thrones novels would agree that one of the most magnificent things about the TV adaptation is how its slate of mythical creatures — the Targaryen Dragons, the Dire-wolves, White Walkers and the Three-eyed Raven — have all come to life so vividly and effortlessly, capturing the imagination of viewers. For that, we have William Simpson — who has been with the show since the beginning — to thank.

William started off as a comic book artist, before he got into storyboarding for film and TV productions. He let the Vulcan Post team pick his brain on creating the world of Westeros, his favorite Game of Thrones character, and his artistic inspirations. Read on to find out!

1. Your role as a storyboard artist on the show is pivotal to the look and feel of the TV series. What does creating the concept art of Game of Thrones involve?

The thing about creating the concepts in the pilot work was that everything I was working on then was going to have an influence on the rest of the TV series. That’s kind of like a monumental part. For any creator, the fact is that the stuff you do becomes the crux of the show.

It basically involves reading whatever descriptions there were, and whatever elements I was going to work on, and trying to generate a believable concept. It has to work, you have to know that the work that you do works in a reality-based world. No matter how outlandish it would feel for the concept, idea and the character, it has to fit in because I remember there were so many fantasy films that aim for fantasy first and the problem is they are unbelievable, and you will not accept it. You just don’t buy it. It’s like the costumes look ridiculous, they don’t look like they have protection on at all, or they look like they are stuck on with tape. You want to make sure what you end up doing is believable and rooted in the reality of the history.

Anything I did in the concept was to make the world of Westeros a believable thing. When you think about dragons, people think we have the dragons in the backlot, you know, they are these lovely creatures just sitting there. Dragons, so far I haven’t seen a real one, but I have drawn quite a few of them. They have to feel real, weighted.

2. Did you read the Game of Thrones series before working on the show?

Prior to the pilot, I had never read a single Game of Thrones book. I didn’t know what it was. I’m very adaptable, throw me a job and I’ll adapt to it. I did read the first book when I was getting into the series, as it was essential for me to get the feel of what the world was. Once we created the world in the first season, it was then much easier to work from the scripts.

In other ways, it was great to get the same excitement level that the audience would get when they first see the stories. When I read the scripts first, it’s like I’m unaware of what’s going to happen next. It’s also brilliant that I get the same shock value as the audience when they see it on screen. I think that helps!

3. What has been most challenging about translating author George R.R. Martin’s vision onto the story board?

It’s a very strange thing to be asked, because I don’t know about it being difficult. I don’t think it’s felt hard for me at the same time, as I immersed myself in his works. He’s very descriptive, and it’s also a world that I’ve been mentally involved in since I read my first comic book. I’ve always got Barbarian heroes in my head, I’ve watched so many films over the years on Vikings and knights in armour which are amazing, that when you step into this world, it was very easy to latch on to the atmosphere and conditions.

George’s stories have a very Machiavellian feel; you are buying into the politics of the world, and if you get that, the world just comes easily. I just feel comfortable in it, I don’t see any major difficulties; the only difficulty I have is time.

4. Fans all over the world grieve madly whenever a character is killed off in the storyline. Having worked on the show art for a few seasons, does that make it any easier for you? Do you have a personal favourite whom you hope won’t get killed off?

Absolutely, absolutely! My favourite is Tyrion. There are so many characters — I love Dany. She’s beautiful and a great character but for me, the everyman character is Tyrion and he’s so representative of human beings. He’s physically a small guy, but he’s a small guy in so many ways. He’s the overlooked character by the other characters in the story. He’s the one who consorts everyone in the story but the credit goes to somebody else. He’s got an amoral status throughout the story, but he’s also moralistic in a different way.

He tried to protect his lover, Shae, by sending her away because he knew he was saving her, and she turns on him. It’s so awful because everything he was trying to do benefitted other people. There was protecting Sansa Stark, and he ended up being locked up in prison to be executed. I love that character. The guy is at the whip and mercy of so much that’s going on, he’s got everything against him and you want him to succeed. He’s absolutely perfect.

5. When you were starting out, were you inspired by any role models or had any mentors who influenced your style and career trajectory?

Yes, I did. There’re a lot of artists whose works I love. I can see their work in my style. Throughout the years, there’re artists like Gene Colan in American comics who’s incredibly talented, whose light and shadow play is the best. Then Neal Adams came along and changed the way comics look, a certain kind of realism we never had before. Even Jack Kirby, who was such a powerful artist, couldn’t look at a place without getting a sense of power from there.

Will Eisner is an incredibly beautiful storyteller and has an amazing way of mixing buildings into titles — letters would become buildings, etc. Then you come to people like Barry Windsor Smith, whose artwork is rooted in a beautiful, romantic, ornate kind of world.

When I first started doing comics as a job, within probably about two months into my work, I went to London and met Garry Leach who worked on 2000AD and Judge Dredd. Garry was working on Miracle Man (originally titled Marvel Man). His artwork was so rich and believable. Garry’s one of those guys I spent years talking to. He was a friend and a mentor whom I learnt a lot from over the years. He gave me a lot of advice over the years and all of it was good.

The first work I saw was actually Michaelangelo’s. My mum dropped this into my lap one day, and this was how I began my artwork. I was a kid, I didn’t know who these guys were. What’s really funny is the way it affected my work. I love the Renaissance painters, and when I first discovered Caravaggio, I couldn’t believe Caravaggio had been doing what he had been doing since the Renaissance days. His work was so modern, the understanding of what light was and shadow and so on. You would have sworn that his guy’s paintings were done by an artist today, but no, it was done in the Renaissance.

Artists like that made such a difference to the work I did. When I first started oil painting, I saw these brilliant Renaissance illustrations in books, and I always wanted to get my artwork to be as perfect, as smooth, not realizing the size of these paintings. My whole purpose was to get the effect I saw in the books. It was only much later that I realized the A4 prints in the books were actually six-foot paintings!

6. What advice do you have for budding artists who have dreams of making it big in the comics or storyboard artist industry?

The advice I think all artists should have — you have to love the work more than anything else. It’s not about money. I mean, we all have to live and if we are lucky, we get success, we make more money than what we got previously.

I do like it when someone gives me a big cheque. I like the benefits that come with being good at something.

But, in the days I was unemployed and when work was scarce, I just could not stop myself from drawing things. If I didn’t have a job to do, I would find someone to draw. You have to, in life, love what you are doing. I don’t believe in this idea that you are going to work till retirement and think you are going to enjoy yourself. For me, that has to be the way you live your life. First and foremost, an artist has to want to be the best they can be at what they are doing.

Can’t wait for Season 5 to begin? Catch a glimpse of what is to come, before Game of Thrones’ premiere on 13 April on HBO (Starhub TV Ch 601).