Putting Together The Pieces: Tiffany Loy On Crafting Her Unique Tote Bags 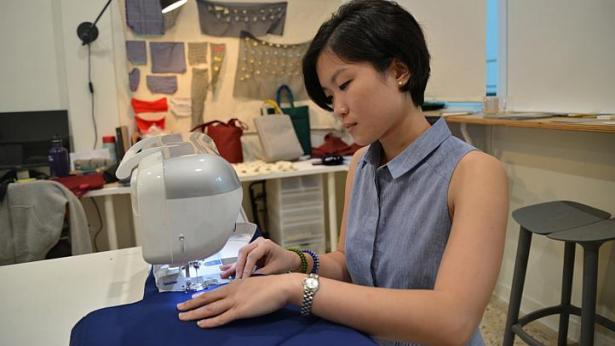 Talk about a bag for a rainy day. For 28-year-old Tiffany Loy, founder of Parasolbag, constructing unique bags out of parasol fabric is all in a day’s work.

As its name suggests, a Parasolbag is a bag sewn from canvas pieces left over from the production of parasols and awnings, retrieved from local parasol factories. In her studio at Seah Street, Tiffany experiments with these odds and ends, lovingly handcrafting them into one-of-a-kind, stylish bags.

You know the saying ‘waste not, want not’? The inspiration behind Parasolbag’s unique concept, Tiffany says, came about when she was speaking with an eco-conscious friend:

“It all happened quite naturally. At first I was using fabric from the roll, meter by meter. But a friend suggested that I should get scraps from the factory instead; to use pieces that will otherwise be discarded. So I did, and from then on I’ve been using the off-cuts for Parasolbag.”

The decision to put surplus fabric to good use brought about other benefits as a result — her canvas bags are remarkably durable and water-resistant, and the additional seams that weave over the bags are full of quirky character. It also means that no two Parasolbags are the same, reflecting the uniqueness of each individual who carries it.

Mind Of A Designer

As a bag designer, Tiffany takes a highly experimental approach to her work. Last year, she designed the “Everyday Tote” — a canvas bag fashioned to ‘gain more character’ through prolonged use. The bag is painted over with a different colour, so that as the original colour of the canvas begins to show through from wear and tear, distinct patterns are produced.

Asked to describe herself, Tiffany says, “I’m very interested in learning about the way things are made and put together — how machines function, how they can be used in different ways.” This explains — at least partly — why, despite the challenge of having to put together oddly-shaped leftover scraps for Parasolbag, she isn’t deterred.

“I actually design as I make, so the process always requires many trials. This applies to all my personal work, as well as Parasolbag. At the start I don’t really know what I’m going to make, but it’ll get clearer as I start fiddling with some materials.”

It’s surprising that despite the effort she puts into handcrafting her bags, their designs aren’t the quality she loves most about them. Instead, her charmingly modest answer speaks volumes about the unassuming way she considers her role as a designer:

“It’ll have to be the the colour and the material — both of which aren’t my credit to claim. All I did was to design a way of making the bags such that these values of the material can be appreciated.”

Every Task Can Be A Challenge

Tiffany’s one-woman startup has definitely seen its fair share of challenges, with more up ahead as she continues to refine the details and fabrication process of her bags. She says that for someone who strives to push herself constantly, almost every task can present a trial.

“A simple task like making labels for the bags [was] a challenge. I didn’t want to use the standard fabric labels for my bags — I wanted something more appropriate for the story of my brand, which is about the material and holds the idea of paying attention to details.

Eventually, she hit upon the idea of using the same parasol material for the Parasolbag labels. “It took some time to arrive at the design and placement of the label”, she explains, “but I’m satisfied with the outcome.” And judging from the way she speaks of challenges as merely a way to better herself, it’s clear that she is someone who has the inspiring ability to turn her struggles into meaningful experiences.

“Every task can be considered a challenge,” she says. “You have to think about how you’d like to do it differently, and make it worthwhile.”