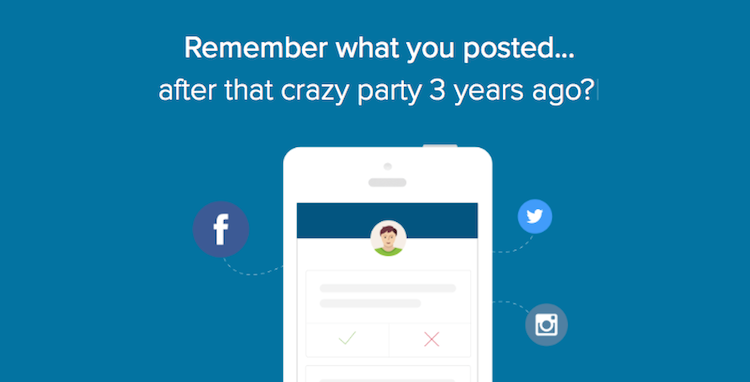 What do you do before sending in a job application? Check your resume and cover letter for typos? Get references from a current employer? Perhaps you do a little bit of both. Or, wait, let us guess: do you do a massive spring cleaning on your social media handles, instead? In this Internet age, that’s hardly surprising — and might just be the smart thing to do.

We human beings are an odd bunch: we share a lot more about ourselves when we’re online. And the photos and statuses we post on our social media dashboards are often embarrassing and — let’s face it — very, very unflattering. But here’s an app that wants to change that.

The man behind Clear

Say hello to Clear, a new app that’s going to help you to sweep all that nasty junk away from your social media accounts. Its concept is very much similar to SimpleWash, an app that cleans up Facebook and Twitter profiles.

There couldn’t have been an individual more suited to create Clear then Ethan Czahor: if the name rings a bell, that’s because he was previously the Chief Technology Officer to American politician Jeb Bush. After his offensive tweets were brought to light (Czahor claimed that the tweets were posted while he was practising for an improv comedy troupe), he stepped down from his position and left the office.

The experience was a huge wake-up call for the 31-year-old, and it prompted him to create Clear. Here’s how it works:

The app does a quick sweep of your Facebook, Twitter and Instagram accounts. It analyses keywords that include profanity, and highlights them for users to evaluate and delete. Its intelligent processing works by using its “own algorithms as well as assistance from the IBM Watson® supercomputer.”

It sounds bizarre, but the app is only available to a small group of users. That’s right: there’s a wait list, and you have to sign up for it if you want to use Clear. Last I checked, there were 28,936 people ahead of me. You can try to speed up the process, of course — all you need to do is share the link to the app on Facebook and Twitter, and you will be able to move up a few slots on the list.

Or better yet, just switch your social media accounts to private.