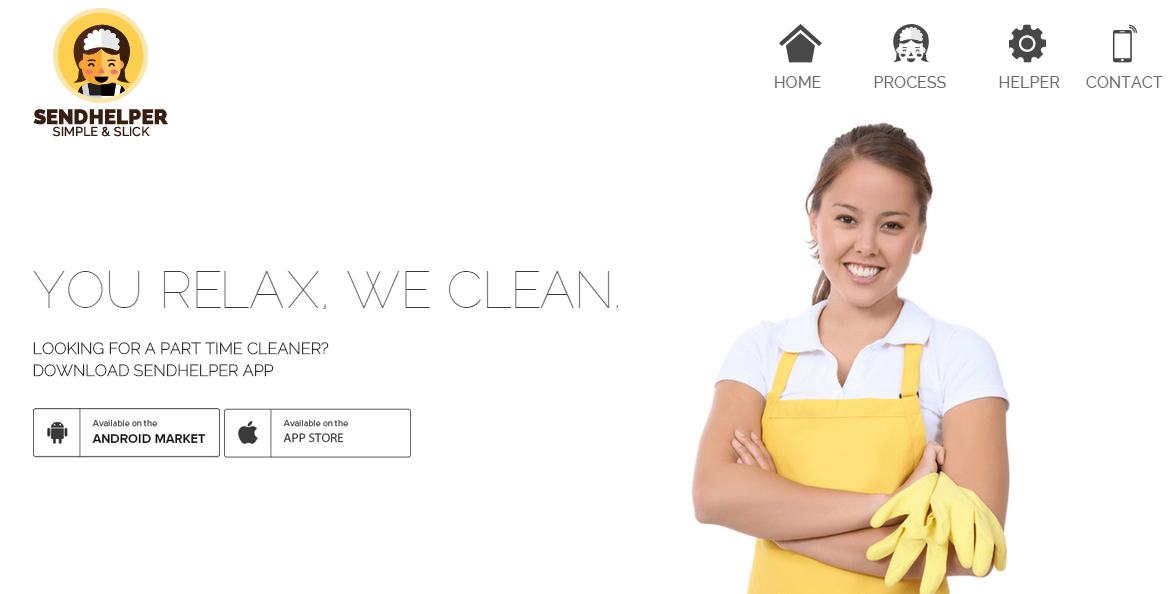 It’s old news that Singaporeans aren’t too big on cleaning up after ourselves: while we enjoy the reputation of being clean and green, it’s no secret that we also require a veritable army of cleaners to maintain our landscape. As we mentioned in a previous article, our population-to-cleaner ratio has gotten so out of hand that it prompted Public Hygiene Council chairman Liak Teng Lit to say, “Singapore, we have five million people and 70,000 cleaners. That’s two Singapore armies. It’s quite ridiculous.”

Strangely enough, the notion that Singaporeans are too proud to get down and dirty is being proven wrong by the industry you’d least expect: on-demand cleaning startups. The fact that a recent spate of startups like Helpling and The Sunday Crew are gaining popularity sounds like more of the same reluctance to do such menial labour, but one look at the cleaning staff they employ would disprove that notion. Without exception, the freelance cleaners registered with these startups are all Singaporeans or PRs.

Launched just last month, Sendhelper is the newest kid on the block to venture into the local on-demand service market. It’s early days yet for this market — the two on-demand messaging concierges in Singapore, nihao and Messenger, launched barely two months ago — but it’s already starting to seem saturated with the blitz of start-ups entering it. We spoke to Dheepu George, Business Development Associate at Sendhelper, to pick his brains about on-demand services, and why Singaporeans need them.

The team of three investment bankers behind Sendhelper — NUS, INSEAD and ISB graduates, according to Dheepu — were struck with inspiration when they realised that their families and friends were all facing problems in their search for a part-time cleaner.

As Dheepu recounted this to me, I found myself nodding in agreement — his words recalled a colleague’s complaints to me about a similar difficulty her family was facing. The need for hired help — whether part-time or full-time — is a “common household problem”, Dheepu says, in busy, urban Singapore.

“Singapore has approximately 1.3 million households and only about 200k full time maids. Someone must be cleaning up the rest of 1.1 million households. Even if hired cleaners are only needed by 1% of that market, that’s already 10, 000 households as our potential customers. There’s no cleaning agency that can serve that large a customer base, so technology has to step in.”

Initially, I felt averse to the idea of on-demand help — it seemed to be more an upper-middle class privilege than anything else. When I pointed this out to Dheepu, however, he readily framed his startup’s service in a different light.

“We’d like to see home cleaning in a different perspective. In a time pressed life, it’s an uphill task to complete your projects on time, spend quality time with family and go for a vacation in between. Sendhelper steps in when there’s too much on your plate — we take care of basic but essential services like cleaning so that you can channel your time, energy and expertise on other tasks.

Not all of us are equipped to wear different hats, and we can’t be a jack of all trades.”

Undoubtedly, there’re already a good handful of cleaning services in Singapore — sites like House Cleaner Singapore are a dime a dozen — but with the aid of technology, startups like Sendhelper have the advantages of flexibility and speed. Through the Sendhelper app for Android or iOS, Dheepu proudly asserts, it takes “less than ten seconds to book a cleaning, and most bookings get accepted by one of our cleaners within five minutes.”

If Sendhelper’s model sounds familiar, it might be because it resembles third-party taxi-booking app Uber — its well-established competitor, Helpling, has often attracted the name “Uber for professional cleaners”. And the comparison isn’t coincidental, Dheepu reveals. “We saw the impact of technology on transportation through on-demand taxi booking apps, and we were inspired to create a similar impact on other low-end services.”

So is there anything that sets Sendhelper apart from its competitors? According to Dheepu, Sendhelper isn’t planning to stop at cleaning services — the team plans to branch out into other home services in time to come. “We call ourselves Sendhelper and not Sendcleaner,” Dheepu points out, “because we want to build a brand for household services — movers and packers, home deliveries, A/C servicing and such. We want to take away the pain of calling twenty suppliers for one job – we want people to be assured of help when they need it.”

The team has also taken pains to make their platform as convenient and reliable as possible. “We offer cashless booking through PayPal or credit card,” Dheepu explains, “and we have an in-built rating feature in the app that allows the customer to rate a helper’s quality of service. At the end of the day, we want to ensure that a customer is never left unhappy.”

Also Read
New On-Demand Cleaning Service The Sunday Crew Lands In Singapore, But Do We Need Them?

Doing Good in the Cleaning Industry

Remember how I mentioned that domestic help is usually a boon enjoyed by the well off? The interesting thing about fresh new startups like Sendhelper is that they don’t just benefit consumers — they have the potential to make cleaners’ lives much, much better. One way they’re doing this is through solving a few problems that plague the cleaning industry, namely, the shortage of cleaners and the use of illegal domestic workers.

“In our initial research,” Dheepu relates, “we went looking for local agencies that supply part time cleaners and to our surprise, there weren’t many.

The few we came across were actually fully booked and made their cleaners work for at least 40 – 60 hours a week on a salary basis. The rest were using foreign illegal helpers to get the job done.”

It’s been an uphill battle improving Singapore’s cleaning sector, where under-valued and underpaid cleaners — stemming from a “reliance on cheap foreign labour” — are par for the course. Just three days ago, Channel NewsAsia ran a feature on increased wages for resident cleaners as a result of the recently-implemented Progressive Wage Model. With startups like Sendhelper entering the fray, providing a larger potential pool of locals and PRs who can clean as independent workers, it’s possible that they might pave the way for cleaners and helpers to be held to a more progressive, humane standard.

In fact, the demographics of cleaners registered with Sendhelper and its ilk might just revolutionise the stigma surrounding cleaning entirely. The increasing number of locals willing to do such blue-collar jobs defies the still-pervasive notion that cleaning is lowly — a job to be done by someone else.

“We found innovative ways,” Dheepu reveals, “to reach out to housewives, students, and others who were happy to augment their income working part-time. We handed out flyers at hawker centres, grocery stores and HDB units to get the word going.

To our surprise, the people who signed up with us proved to be extremely good with cleaning — they’re all energetic and keen to work. We’ve registered people from diverse ethnicities and age groups, who don’t subscribe to the old notion of cleaning being a “menial job” — what they value is financial independence and supporting their families. Singapore is after all a first world nation and we pride ourselves on being one of the most progressive countries in the world.”

Instead of a status quo where cleaners are low-wage workers, startups like Sendhelper are turning cleaning into a job — albeit freelance — where those in need can earn some extra cash. How’s that for revolutionary?