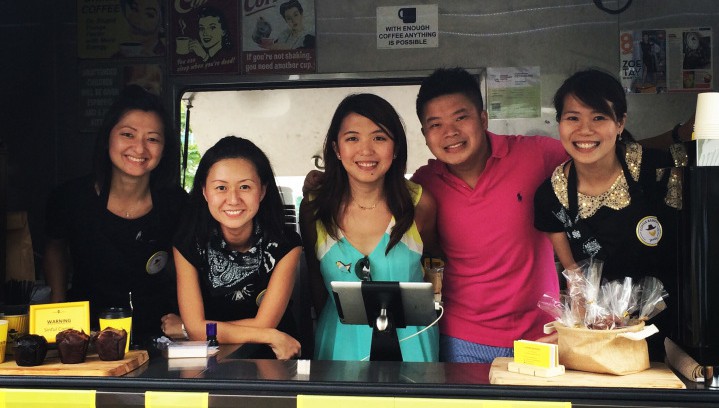 Given their dramatic name, you can tell even at first glance that Coffee Bandits is no ordinary coffee chill-out place. The name of their mobile food truck, co-founders Jessica Chow and Cheryl Ong say, came about during the lengthy process of getting authorisation to operate.

“We love Singapore,” they explain cheekily, “but getting approval for a food truck can be a ‘challenge’. That was why we thought we might be called bandits as we pull shots and run.”

If you haven’t eaten at, let alone seen, a food truck in Singapore, you’re far from being the only one. While food trucks are pretty popular in countries such as Canada and the US, these roving restaurants-on-wheels are far less common here.

It might be the sheer amount of bureaucratic red tape, or the extra challenges that come with a relatively undeveloped industry, but the fact remains that despite several trials by the Urban Redevelopment Authority (URA) to kickstart food vehicles, only a mere handful of food trucks — Kerbside Gourmet and The Travelling C.O.W. among them — survive.

For Coffee Bandits, it’s been a nearly two-year journey of ups, downs, and unexpected challenges (and yes, they are fully licensed now). During this period, as the tagline emblazoned on their truck, “Make your own rules” cheerfully suggests, Cheryl and Jessica have been taking their own unconventional route in bringing great coffee and food to Singaporeans.

Making Their Own Rules

Cheryl and Jessica embarked on their bold food truck journey in late 2013 as two restless, newly-minted mums. The spark behind Coffee Bandits came when the two stay-at-home mums were, in their own words, “looking for life after being a corporate lemming”.

“We were previously from the banking and financial sectors… The inspiration behind Coffee Bandits came from our love for great coffee and great service. We wanted to bring smiles to the morning working crowd and to bring great coffee to places where you can’t find any.”

Mobile food trucks might sound like a strange (not to mention troublesome) idea, but Cheryl points out that it allowed them to bring their coffee fixes to a larger geographical area. “With so many places that fit that profile [of not having great coffee], we either had to be numerous, or be mobile enough to meet those needs.”

The experience of travelling in campervans on trips around New Zealand and Melbourne, she says, also made them more confident about straying from Singapore’s long-established café culture to work in an “all-in-one vehicle” environment.

“Life is really too short and precious to not put our passions front and center, and that was when we came together to start Coffee Bandits.”

Also Read
The Recipe To Restaurants Of The Future: Apps, Drones, And Robot Chefs

What most might not know is that despite the implied freedom of mobility, Singapore’s food trucks cannot roam about to find customers at will. Instead, in addition to a licence from the National Environment Agency (NEA), food trucks must apply for venue permits for each location they set up shop in, making the process significantly more complicated.

According to Cheryl and Jessica, it took them no less than eight months to get all this red tape in order before setting up their legal, thankfully no-longer-bandit truck. “We had to work with a few government agencies, and we were blessed with contacts who helped us along the way, especially in the technical aspects of retrofitting the truck.”

But their form-filling days aren’t quite over, Cheryl says, because they’re currently working with the SME Centre to apply for certain business grants. The SME Centre — where local entrepreneurs can get business advice and information on government schemes — has “guided us a lot in terms of grant applications,” Cheryl explains. Budding food truck owners might want to take note — “most importantly, they don’t charge!”

It wasn’t just red tape the duo had to cut through, though, in transiting from their corporate jobs and motherhood to a highly unusual F&B business. “We were new to F&B,” Cheryl says, “and food trucks are still fairly new in Singapore. Because of these, lots of time was spent on research and development, and pushing boundaries.

“And as most new business owners would know, the hours put in are long and juggling between work and family is definitely a challenge. As much as we were used to long working hours, the physical demands of our F&B business were something beyond our expectations.”

So what makes their tough journey of setting up a food truck worth it? For the duo, the answer to that is undoubtedly their customers. Some of the most heartwarming moments that’ve stayed with them so far, Cheryl reveals, were when they had customers “braving heavy rain just to get to us, hand-making cards, or simply telling us how much they appreciate our presence.”

For the places they frequent, the Coffee Bandits are a unique and welcome addition to the city milieu. The charm of their nomad concept is heightened by the fact that their menu changes often, so even regular patrons will never get bored of their fare — and by most accounts, everything from their freshly roasted coffee to their specialty pulled pork sandwich is delicious.

Of course, there’s the added novelty of having to hunt the food truck down at the somewhat ulu places they drive to — Ayer Rajah on Tuesdays, Genting Lane on alternate Wednesdays, Thomson Road on Thursdays, Fusionpolis 1 on Fridays, and the Singapore Cricket Club on Saturdays —  to please even the most jaded of palates.

If you have it in mind to catch up with the Coffee Bandits, here’s a piece of good news: their plans for the future include working towards having more than one truck. It’s also good news for Singapore’s F&B industry, which in recent years has seen a ‘café bubble’: aspiring café entrepreneurs are meeting with the challenges of a popular but saturated market. What if travelling food trucks, an underdeveloped but fascinating phenomenon, can be the next big thing in F&B, not to mention a practical endeavour in land-scarce Singapore?

“It’s our vision,” Cheryl reveals, “to see the mobile food truck industry in Singapore grow.” We are a foodie nation, after all, and there’s no reason why the F&B scene — and our stomachs — shouldn’t have space for another kind of food business.