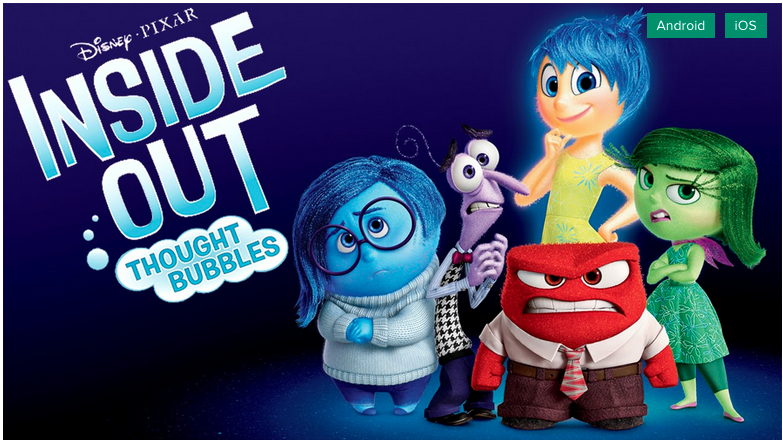 Now from first glance, you may feel like it’s a game geared for kids and for your adults who have childish tendencies—and you’re right, but the game is real fun.

From the creators of Frozen, the game has been designed in the fashion of one of the most popular genres in the app store called the bubble shooter.

Now that shouldn’t be a turn off because the game makes up for it in fun, cuteness and ample amounts of emotion.

The main character Riley is guided by her Emotions—Joy, Fear, Anger, Disgust and Sadness—and each of these emotions live in the Headquarters (the control center inside Riley’s mind) and they advise her through everyday life. The premise is that you follow Riley’s Emotions on a journey to sort and match bubbles and you get to pass through locations inspired by the film, such as Family Island, Dream Productions, and Imagination Land, among others.

The game requires you to shoot and match memory bubbles for each emotion. You start out with Joy and then proceed to Sadness, each emotion has a unique power that you get to experience once you get to a particular level.

For example, the emotion of Joy has a gauge and you get to fill it up when you specifically target the yellow bubbles. Similarly, the emotion of Sadness requires you to target the blue bubbles and once the gauge is full, you’re given a special power. I will leave that for you to discover.

The game also has special puzzles that require you to clear up obstacles like Brain Freezes and you also have to free up a few emotions as well.

Firstly, the game is beautifully designed and it’s full of bright colours and it’s sure to give you flashbacks of your childhood. The game starts out very smooth and it’s pretty easy to clear up level after level.

While, it may appear easy in the beginning it’s not like that the rest of the way. Since I thought that the game was easy, I felt like I was on top of the world—I felt I was too smart for the game and within an hour or two I cleared about 19 levels, and that gave me a deep sense of accomplishment.

I returned to the game the next day thinking I would have the same experience but I was wrong, all of a sudden the game became tougher—I suspect I wasn’t given enough bubbles to clear of the level. Surely it can’t be my fault, I’m too smart for that.

Even though it’s difficult, I have this incredible urge to clear the levels. It’s just that addictive.

This is one game that you can enjoy while you ride the train or while you’re at home bored of the family! It’s just simple, good ol’ fun.

You can download the game here (iOS) and here (Android).