I Tested A PS4 On A RM10K Full HD OLED TV. I Never Want To Game Any Other Way Again. 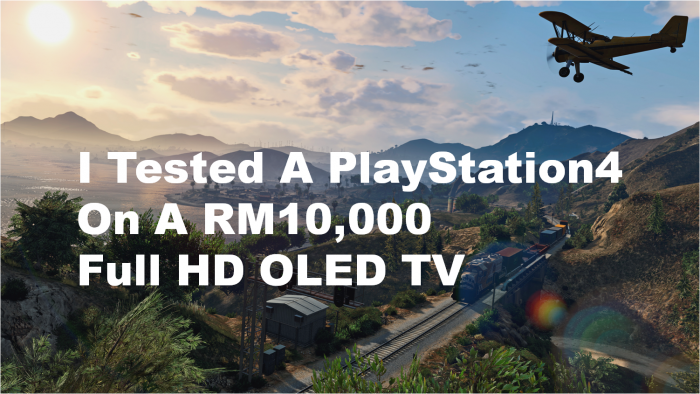 Not too long ago, I had the wonderful opportunity to test out a beast of a TV that adopted a new panel technology known simply as OLED (Organic Light-Emitting Diode). OLED panels are said to be the next big thing in home entertainment but being the skeptic that I am, I had to see it for myself to believe it.

Without further ado, allow me to introduce to you the…

Before I start talking about my experience with the TV, allow me to explain what the OLED technology is.

What is OLED and Why is it Important?

OLED stands for Organic Light-Emitting Diode and is a variant, an evolution, of LED backlit LCD technology. It is said to have better imaging quality, reduced power consumption and fast response times compared to regular LED displays, which would mean that there should be lesser (if any at all) image blur issues with any connected video-capable device such as a video player or a game console.

I was told by LG that OLED TV with Clear Motion technology enables 1000 times faster refresh rate than LED TV. Pixel Dimming is a whole new display technology only possible in OLED TV, this gives birth to LG’s Infinite Contrast feature which allows these self-lighting pixels to turn off completely, resulting in an absolute black colour instead of purplish or grayish tints seen on other TVs when the image fades to black.

If that was hard to digest, just know that OLED allows images to look sharper, enable colours to be differentiated on a more complex level (different hues, etc.) and reduces energy consumption.

The TV in itself looks like a perfect fit for any home. At 55 inches with a curved screen and nearly paper thin, not only will you get a TV that displays beautiful imagery, you’ll also get a TV that is a wonderful sight to look at.

The Magic Remote works in a very unique way. Instead of navigating the TV via directional buttons, the remote has a built-in motion sensor that feels similar to Nintendo’s Wiimote so you can just wave around the remote to scroll through apps or settings. I have to admit, I had fun waving the remote around like a wizard casting spells as the on-screen cursor moved around naturally without any delays.

The webOS user interface is easy to navigate through without any confusion. With the press of a home button on the Magic Remote, you can scroll through apps like Youtube and setup new devices like game consoles with ease. I’m quite impressed with webOS as it feels polished and is user-friendly, unlike using the Kinect with the Xbox 360.

Also Read
10 Worth-Buying Things RM2.6 Billion Can Get You

I’d like to remind readers that this model is the Full HD version, not the 4K version but it is not a bad display by any means. I was shown a trailer of the latest Fast & Furious film as well as some demo videos by LG to showcase its strengths.

Everything on screen looks more fluid, more smooth compared to anything I have seen before. I have a Full HD Philips TV but after seeing this TV with my own eyes, I can say without a doubt that the LG EC930T OLED TV is on a much higher level of superiority.

With the Fast & Furious trailer, the display was always crystal clear, even in scenes where objects are moving fast. They weren’t lying when they said that there is zero image blur for their TV. The colours looked livelier and natural as it doesn’t seem oversaturated or dull in any way. Combine that with the curved screen and you have yourself an IMAX-level display for your homes.

I couldn’t test the video quality via Youtube as the internet was really slow there and Youtube automatically scaled-down the resolution.

I wasn’t completely sold on the absolute black colour of the TV for the video test as I thought that it was just part of the video, that is until I did the gaming test.

I brought along my Playstation 4 and a copy of Grand Theft Auto V. On my TV at home, the black colour shown when you first start the Story Mode is a dark blue-ish colour but on the LG EC930T OLED TV, it is perfect black. I couldn’t believe my eyes.

Furthermore, the game felt more fluid due to the fast response time delivered by the self-lighting pixels. For those who aren’t aware, Grand Theft Auto V is a 3rd person shooter and action-adventure game. Driving around the world map and fighting people never felt so fun. Thanks to the fluidity of the movements and the image depth given by the curved screen, I actually completely forgot about reviewing the unit for a bit and was completely immersed in the game.

During the in-game daytime, I never realized the world map looked so beautiful. Colours of the flowers, the scenery and the overall environment were like a masterful work of art. As for in-game night time, the dark colours made me subconsciously play stealthily and gave me a sense of impending danger lurking in every corner.

Mind you, I already finished the game and I didn’t recall experiencing this game with this level of intensity before. Gaming on the LG EC930T OLED TV is a very delightful experience.

At this point, you might be thinking that I missed out on audio. It’s not that I didn’t want to write about it but rather, the review was done in an open space with a lot of noises coming from virtually every direction, which disrupts the acoustics of the speakers. Personally, I’d get a home theatre set to go with the TV because there’s only so much that a built-in speaker can do.

I was told that LG Music Flow sound bar and speakers can connect to both LG TVs and smartphones wirelessly via Wi-Fi. I haven’t identified which home theatre set specifically but an upgrade in sound quality without having wires messing up the room sounds like a must-have for the LG EC930T OLED TV to me.

Honestly, the only improvement that I want for this OLED TV is a bigger screen. I don’t have 4K capable devices as of now so that’s not something I worry about. Overall, the LG EC930T OLED TV is a great TV that seems to live up to LG’s promise for an immersive viewing experience with vibrant colours and an absolute black level of darkness. This isn’t even the best that LG has to offer.

Later in the year, LG will be releasing newer models that is not only bigger, but also has support for 4K resolutions with 4K upscaling to make non-4K videos and games look even better. But for now, this is more than a movie addict and gamer can ask for.