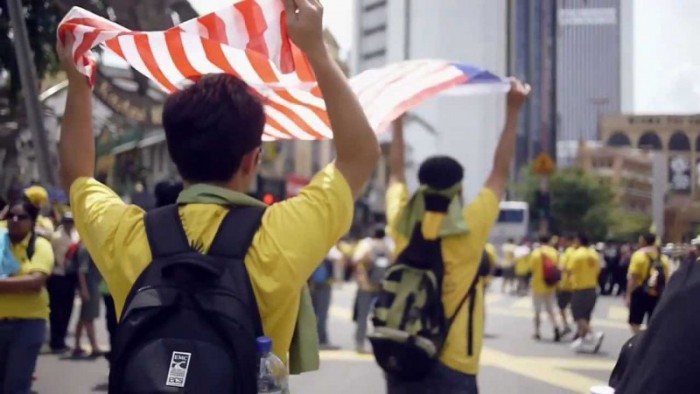 When anyone talks about the BERSIH rallies, one thing immediately comes to mind—the colour yellow.

However judging from the past few BERSIH rallies, there are multiple other characters that you will be able to see this coming weekend, not just ordinary joes in yellow T-shirts. Keep an eye out for these 11 people that you will definitely come across when attending BERSIH 4.0.

This group of people knows when is the best time for business, they can smell an approachin opportunity from a mile away. Therefore they are smart to take this chance to sell BERSIH related merchandise, such as t-shirts, masks, fans and more.

As the name suggests, this group of people wants to be there purely due to curiousity. “What’s going to happen? Who is going to get beaten?” they ask while rummaging through their wardrobe for a yellow T-shirt.

These social media fanatics are there for some heroic shots. They want to get some pictures of them caught in action as they “fight for the country” so they can post it online and show their patriotism to their followers.

These people come fully prepared for any possible situation. They are armed with salt to neutralise the effects of tear gas and to prevent chocking. They bring extra bottles of water to share with people in need. The Real Angels don’t judge anyone by their skin colour, race, or religion, they are there to help.

Cosplayers are the creative ones. Instead of wearing a plain yellow T-shirt to attend the rally, they dress up as fictional characters that are yellow in colour. For instance, the Digi yellow man, Pikachu from Pokemon, Spongebob Squarepants or the yellow coloured member of Power Rangers.

Also Read
Going To Bersih 4.0? Make Sure You Have These 10 Essential Items.

Brave Warriors are ready to defend the participants in whatever way they can. They rush to the front line to face the FRUS. These are the people who will brave through the smoke to water down a tear gas canister, or throw the canister back to where it came from.

They might not be able to pull a Pitbull by doing “rain over me” but they certainly do their part by hosing down participants who are tear-gassed from their balcony.

There is no solid proof that policemen went undercover as protesters during the rally but some pictures were circulating around social media, such as Curi-curi wang Malaysia Facebook page.

People who are at the wrong place and at the wrong time are called the Lost Souls. Somehow they didn’t get the memo that something was going down at KL. All they wanted is to buy a pair of shoes at Masjid Jamek but sh*t just got real and they got dragged into the mess. Worst yet, some of them just so happen to be wearing yellow.

Revolution Enthusiasts may not actually care about the cause and the movement, they probably don’t even care about who the government is—they just want to be part of something revolutionary so check it off their bucket list.

Need I say more? They love the country and they truly want to make a change in Malaysia by participating in the rally.