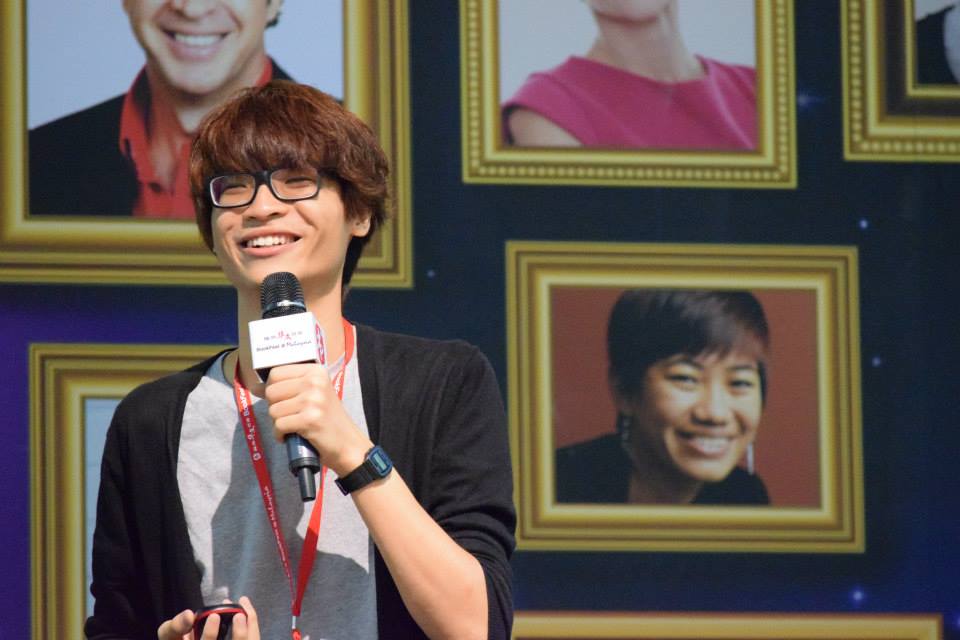 Nixon Siow draws comics. His choice of subjects are mostly everyday things that most Malaysians relate to. And although Nixon says that his drawing skills can be improved, his simple and fun artwork is often able to arouse laughter and provide entertainment to readers who purchase his comic books, as well as his social media followers.

Without any knowledge of the man behind the comics, you might assume that the 26-year-old comic artist is just another funny and talkative Malaysian guy who loves to draw. So we spoke with Nixon to find out more about himself, and what he does.

Meeting Nixon in person is an eye opening experience. He doesn’t quite give off the funny guy vibe (unlike how he portrays himself in his comic book) but appearance wise, his drawings are quite accurate — he is tall and skinny, though he no longer keeps the red hair that his comic self has in his book. Most importantly? Nixon does not talk a lot.

“You can say that I’m introvert but I’m certainly not anti social, as I still enjoy hanging out with friends, talking, but I’m more of a listener,” said Nixon. And this is reflected in his artwork, which covers topics ranging from what he observes in his daily life, what he has been through, to current issues and the one thing that we Malaysians love to talk about — politics.

“It is pretty risky to post politics related content in the book, therefore I only published a few and most of them can be found on my fanpage,” said Nixon.

Apart from himself, Nixon has also come up with three other characters: his sister Lilian, and a couple. “One guy, one girl, who are part of a couple. I always pay attention to the couples around me, and see how they communicate with each other, verbally and nonverbally.” These observations, of course, have contributed to the ideas he has for his comics.

When did it all start?

Nixon was only 10 years old when he first began to draw. After seeing his friends reading and drawing comics in class, he started to draw his own and became a cartoonist.

Back when he began uploading his work online, Nixon said, social media was not popular yet. He only started to publish his work on his Facebook page in 2012.

“Back when I was in college, Blogspot was like the hottest thing, but the response of posting my comics on Blogspot was not good compared to when I created my own fanpage, so I decided to shift everything from Blogspot to Facebook, and the response was overwhelming.”

In recognition of what he has done, Nixon was invited to do a book sharing and autograph session at BookFest @ Malaysia, one of the biggest book expositions in the region. It was held by Popular Malaysia in July this year. He shared, “this is one of the most challenging parts of my journey being a comic artist, I had to speak English at the sharing session, it was so exciting yet nerve wrecking.”

On the art industry

Nixon shared that despite enjoying drawing comics, being a comic artist is not his full time job. After graduating from The One Academy, Nixon worked as an in-house graphic designer at a company that focuses on nutritional products. Currently, aside from his work as a comic artist, he is also a freelance designer and piano instructor.

Speaking about the art industry, Nixon said that hard work and luck are equally important. “I know many talented artists could not make it in the industry, many of them give up in the early stage.”

He also shared that being a comic artist is not only about your drawing skills. Although skill is important, marketing your artwork should not be overlooked too.

“The comic industry is not only about your drawing skill, you need to know how to market your artwork, what should you do to spread your work, and also being consistent in schedule, to attract people to come to your site constantly.” Having experienced the strength of social media, Nixon is no longer using his platform on Blogpost to showcase his artwork.

As for people who have given up on venturing into the art industry, I asked Nixon what advice he would give them. “You have to consider and think about it carefully, I have spent a lot of time being involved in these, and my salary wasn’t able to cover myself when I started.”

We have heard the phrase “follow your passion” many times. However, Nixon advises that it would be better for budding artists to focus on a full time job that earns them a stable income, if they have found one. That said, with all the midnight oil that he has burnt and the funds he has injected into his artwork, Nixon shares that when he saw his books on the shelves, he knew that they were indeed worthwhile.