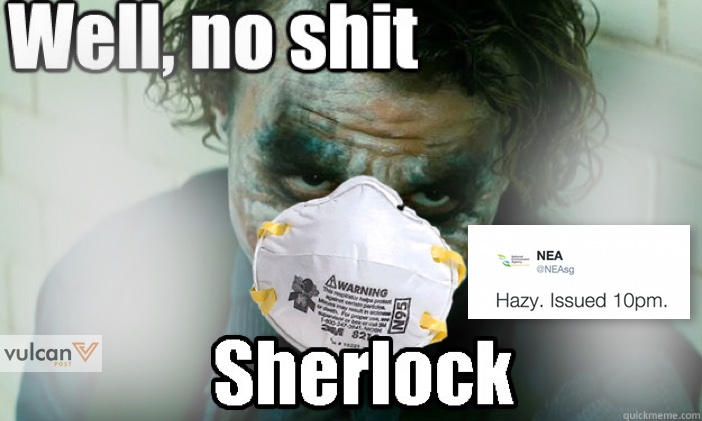 We get it. It’s always gloomy out, the sun is nowhere to be seen, and that horrible smell like something has thrown up smoke through a sewer pipe…we all hate the haze.

But what we hate more than the haze is people telling us that there is haze like it’s new information.

NEA has been the butt of jokes as it takes centre stage in these hazy few weeks. People turn to them for information: How dangerous is our air? Should I be panicking and grabbing every N95 mask from every Guardian and FairPrice? Is it safe to walk out of my office to buy lunch? And while the folks at NEA are probably working their socks off to gather intel for us panicky Singaporeans, the last thing we need is this:

Needless to say, Singaporeans were upset. See if you can spot the pattern here.

And if you thought “once bitten twice shy”, well you thought wrong. Five hours later, it happened again.

In a way, I almost feel bad for the NEA. Their website has gone down several times, and some have reported that their app too has stopped working a few times. Haze season always brings droves of Singaporeans to their site, and since we’re so used to having things our way (the efficient, never breaks down way), we’re quick to point fingers at the only people who can provide us with what we really want — a reason not to go into work and instead lock ourselves in the house all day.

In the meantime, other companies are trying to capitalise on this haze situation. Spotify, for example, has released a haze playlist called Hazed and Confused, with hit tracks like “Harder to Breathe”, “Wake Me Up When September Ends”, and “Smoke Gets In Your Eyes”. Very funny, guys.