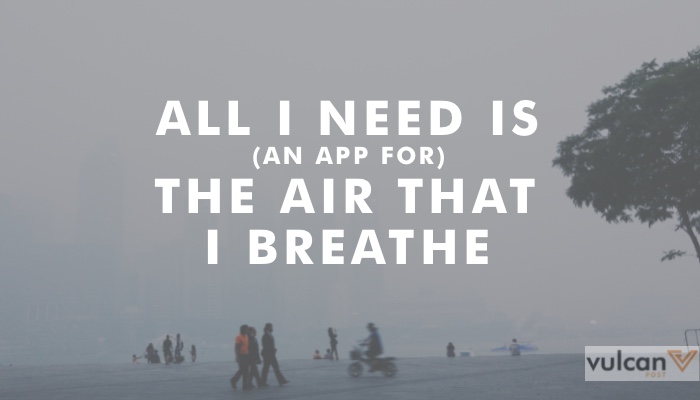 If there’s anything beautiful to come out of this horrible annual environmental disaster we are subjected to, it’s Nebulo.

The app — which is made in Singapore — is also available in Malaysia, Thailand, and Hong Kong. “Nebulo is primarily made as an app to just keep you informed about the haze condition. While there are many existing options out there, we primarily made this app stemming from the frustrations of the lack of an app that just focuses on giving you the numbers at an instant, without requiring you to browse or “hunt” around the screen for your updates,” Duncan Leo, co-founder of Nebulo said.

Together with his friend Jurvis Tan, they’ve created something lovely out of Singapore’s #1 woe, the yearly haze. Nebulo is available on iOS, Android — and the Apple Watch!

The app is simple — it tells you what you need to know about the air we’re inhaling outdoors. The landing page marks the temperature outside and an explanation of what the air quality is like: we’ve been getting ‘The Air Is Bad’ for the last couple of days. No surprises there. Tap the screen and you’ll get more information about the haze reading.

For years, we’ve been plagued by the haze, and every year the same old dispute about the PSI Index arises, together with questions like ‘how can the PSI reading be so low when it looks and smells bad outside’. There is an answer to that: PM2.5.

If you notice, Nebulo chooses to deliberately leave out the one reading we’re familiar with, which is the PSI. Duncan says of this move, “This is partly due to us deciding that PM2.5 was more relevant than PSI for gauging the air quality and also that the 2nd version will no longer have PSI data. However, for countries like Thailand and Malaysia, only PM10 data is available from governments.”

So it may be hazy (high PM2.5 and PM10 readings) but it may not be that unhealthy (e.g. low CO2 and NO2 levels). In fact, PM10 is probably the least hazardous pollutant in the PSI, since your mucous and natural filters will prevent it from going very far down your lungs.

“We get our data from the various government websites; Singapore: National Environment Agency (NEA), Malaysia: Department of Environment (DOE), Thailand: Pollution Control Department, Hong Kong: Environmental Protection Department. For Singapore, we did something a little more interesting with the data. Similar to AQICN, which is an air quality website, we convert the PM2.5 data to AQI using algorithms provided by the US EPA,” Duncan explained.

Right now, the interfaces for Android and iOS are different. You get a lot more info on the iOS, but according to Duncan, “A second version is coming out to match the current iOS aesthetic that you can see on the main landing page. This update will also extend support for more regions like Singapore, Malaysia, Thailand and Hong Kong. For iOS, the update is coming sometime in the next week along with iOS 9, there’s going to be various Watch App updates, more specifically supporting third party applications. We’re also looking to improve push notifications for both platforms on our backends.”

If you’re looking forward to more widgets and features on the app, Duncan explained that they are generally more conservative with feature updates because they personally feel that adding unnecessary features to the app might end up defeating the core ethos of this app — one that’s straightforward without having the user browse around too much. Pretty neat.

Hate the haze, but not the app. Looks like we’ll be checking this out frequently in the next few days. Stay safe, everyone!

Download the app on App Store or Google Play.