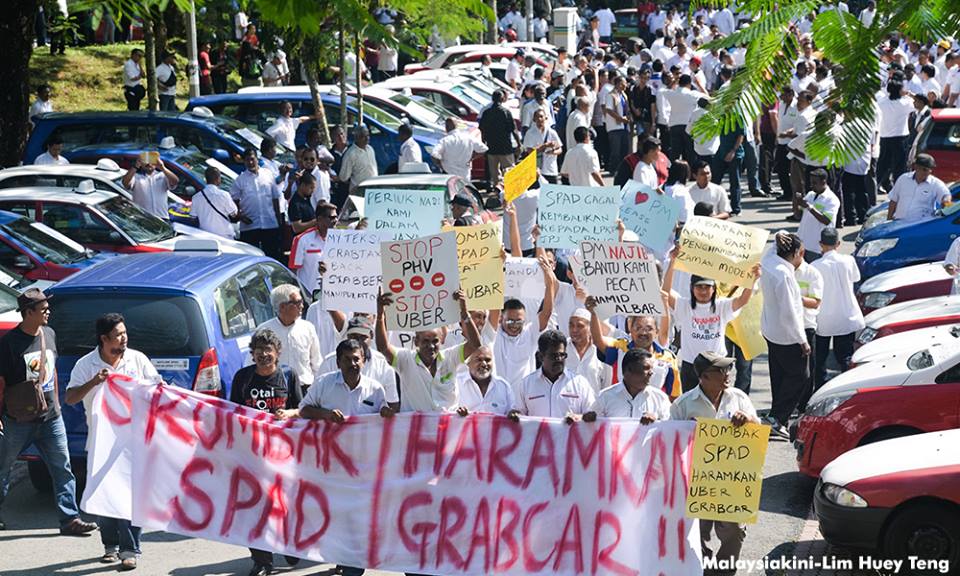 The battle between taxi drivers and ride-sharing services like Uber and Grabcar continues on. Yesterday, an approximate number of 500 taxi drivers marched in protest to the Parliament building to hand in a memorandum that called for a discomfort with such services and the ineffectiveness of the Public Land Transport Commission (SPAD) to defend their industry.

The president of the Klang Valley Taxi Drivers Action Committee (JKBPTLK) Zailani Isa Usuludin told The Malay Mail, “We have met with SPAD many times but their answer to us has always been that they don’t have the power to ban Grabcar and Uber. They say the power is with SKMM. We have also met with SKMM and unfortunately, they tell us the same thing, that they don’t have power and that the power is the SPAD.”

Distraught with their confusion and their inaction, they resorted to hand in the memorandum as a protest.

They gathered yesterday at about 11:30am and marched towards Parliament armed with traditional “peaceful-protest-gear” like placards and banners that read “Haramkan Grabcar, Haramkan Uber (Ban Grabcar, Ban Uber)” while chanting “hidup, hidup, hidup taxi”.

The premise of the protest was to persuade the Prime Minister to intervene as they were losing business on a daily basis. Representing 27 taxi drivers’ association, Klang Valley Taxi Drivers Action Committee (JKBPTLK) Deputy Chairman Kamarudin Mohd Husain insisted that the Prime Minister should sympathise with their plight by helping them protect their livelihoods.

He further went on to share his disappointment with SPAD’s failure in protecting their industry. One committee member told the media, “SPAD has failed to protect the taxi industry. Our welfares is being neglected. Our income had significantly decreased due to the unfair competition by GrabCar and Uber.”

“It’s best for the SPAD chairman to resign since he is incapable of propelling the taxi industry to a new level.”

The protest only drew about 500 people from different taxi groups, which was much lower than the anticipated crowd of 6,000. One taxi group in particular called the Malaysian Taxi Drivers, Limousine & Car Rental Operators Association (Petekma) even went onto to make a threat that they would sack any of its members if they are found participating in the rally and they might subject them to disciplinary action, prior to the event. The group claims to have some 9,000 members in the Klang Valley alone.

Despite the size of the protest, the Malay Mail reported that PAS’s Nasrudin Hassan Tantawi was also present at the rally and he feels that Putrajaya has a responsibility to respond “positively” to the cries of these cab drivers.

He’s quoted to have said, “This is a service for the public that will have an impact on the economy, the public, socially, so the government cannot wash their hands of this. Once a memorandum is given, the government has to respond.”

While the protest was intended to be “peaceful” some of them were seen heckling other taxis driving by for not joining the rally and they were also trying to stop some taxi drivers to show them their placards. In fact, police went on to declare yesterday’s rally as being illegal.

However, Zailani insists that Putrajaya has a week to respond to their memorandum and if they don’t, the taxi drivers will take to the streets again.

While none of the Barisan MPs met with any of the drivers at Putrajaya, quite a few from Pakatan Harapan and PAS MPs came to show them their support and to champion their cause, according to The Star.

It’s been many months now and it seems like the tense war between taxi drivers and ride-sharing services are far from over. As ride-sharing services continues to carry out more campaigns and increase the quality of their service (which is something that the public feels is severely lacking in local cabs), the situation for local cabs also maintains to be grim.