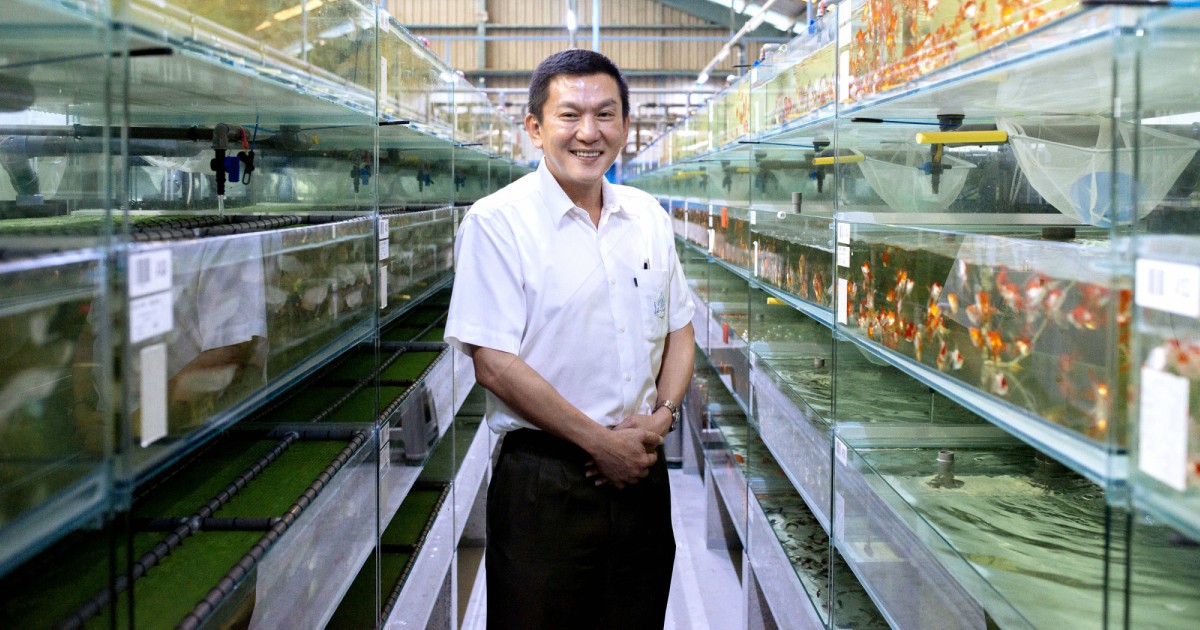 Qian Hu is perhaps most known for its ornamental fish, two of the most famous ones being the arowana and luohan, species prided by the Chinese for their significance of prosperity.

But to the modern Singaporean, ornamental fish can be a white elephant, more decorative and tied to older, traditional generations.

Of course, not all that money comes from selling ornamental fish.

Kenny Yap was, and is, smarter than that.

When Qian Hu first began, the family were inexperienced breeders, having come from a pig-rearing background much like Sheng Siong.

In fact, did you know that their logo features a high-fin loach as a reminder to their mistakes?

After incurring severe losses, the youngest son – Kenny Yap – took it upon himself to wise up though extensive studying.

Back then, many fish stores considered themselves as agriculture, but Yap preferred a lifestyle branding. In 1990, they branched into aquarium equipment and manufacturing and by 1992, they had become so successful that they were importing worldwide.

By 2000, Qian Hu Corporation found it’s public listing on the SGX and this was all before the arowana was even introduced in 2003.

Similarly, Qian Hu undertake multiple projects outside of ornamental fish – namely the Qian Hu Aquaculture in Hainan where they rear garoupas for sale to other growers.

In 2013, a combination of Qian Hu tech and herbal medicine gave them garoupa yields better than others.

Yap has stated that if done right, “this business will be bigger than his current business (ornamental fish)”.

2. Success Is In Innovation

Yap understands that arowana and ornamental fish isn’t sustainable. Commercial arowana breeding has improved in the past 4-5 years, he says, resulting in a drop in fish price.

Their success however, comes with their strong position to become the market leader in export. And in order to achieve this, they invest generously – even a million per year – in R&D, such as in filtration and hydra-technology.

One way this shows is with their albino silver arowana – a product “after 5 years of growing the gene pool,” and also a species that Yap believes can revive the ornamental fish demand.

“We invest for the future,” Yap tells Channel NewAsia in a previous interview.

“If I am a very short-sighted kind of CEO, I would try to save all the R&D money. Then, our profits will be nice, right? But if I do that, I will kill my future.”

In terms of investor dissent, Yap reveals that on the surface, it does appear as though Qian Hu isn’t doing well. People would looks at his results and think Yap is doing too many interviews even though he’s not showing results.

But that’s only because “there are a lot of things [they] do behind the scenes that have not matured enough to show the public,” says Yap.

“Any enterprise that does not embrace innovation, especially in Singapore, will not survive in the next three to five years. I guarantee you that.”

According to Amazon’s Jeff Bezos, “failure and innovation are inseparable twins”, and in this respect Singapore has much to catch up on, given our longstanding aversion to even the concept of failure.

But it is also in this respect that Kenny Yap makes a good leader.

He encourages making mistakes, but not making them twice – an act he calls “stupid” as it means they did not learn from them.

During the interview, he even described how a mistake costing him millions would not end with the firing of the employee.

“I might promote him or her to Chief of the Innovation Department because people who make mistakes usually have the guts to try new things,” he adds.

“People who are very clean do nothing new. They maintain the status quo and try to avoid mistakes. But they are not the kind of people that an innovative organisation needs in the future.”

An article on Business Insider iterate how rich people tend to avoid pessimists. Thomas C Corley, author and Business Insider writer elaborated how an individual is “only as successful as those [they] frequently associate with.”

Kenny Yap reveals how he likes talking to people with a realistic and pragmatic optimism. Meanwhile, he “refuses to talk to people who have negative feelings, because they make [him] sad and unhappy.”

“They get jealous, and other people’s success makes them very, very unhappy […] they never really think about how they can change their lives.”

“They hope that other people fail, so that they can be happy. I refuse to mingle with this group of people.”

Ornamental fish is not a self-sustaining trend that can survive the years, and Kenny Yap understands that very well.

The Qian Hu stories above is not an all-encompassing picture of the company’s mission, but they definitely lend an insightful look into how Kenny “The Fish” Yap is renewing the lucrative trade of fish.

Their success, along with the Bynd Artisan story, is also definitive proof of how seemingly dying business can continue to flourish by embracing the future.

For SMEs looking for resources, they can always tap on NTUC to redesign jobs and improve productivity (via e2i), improve staff welfare (via NTUC’s U SME Corporate Membership Scheme) and send them for training courses.