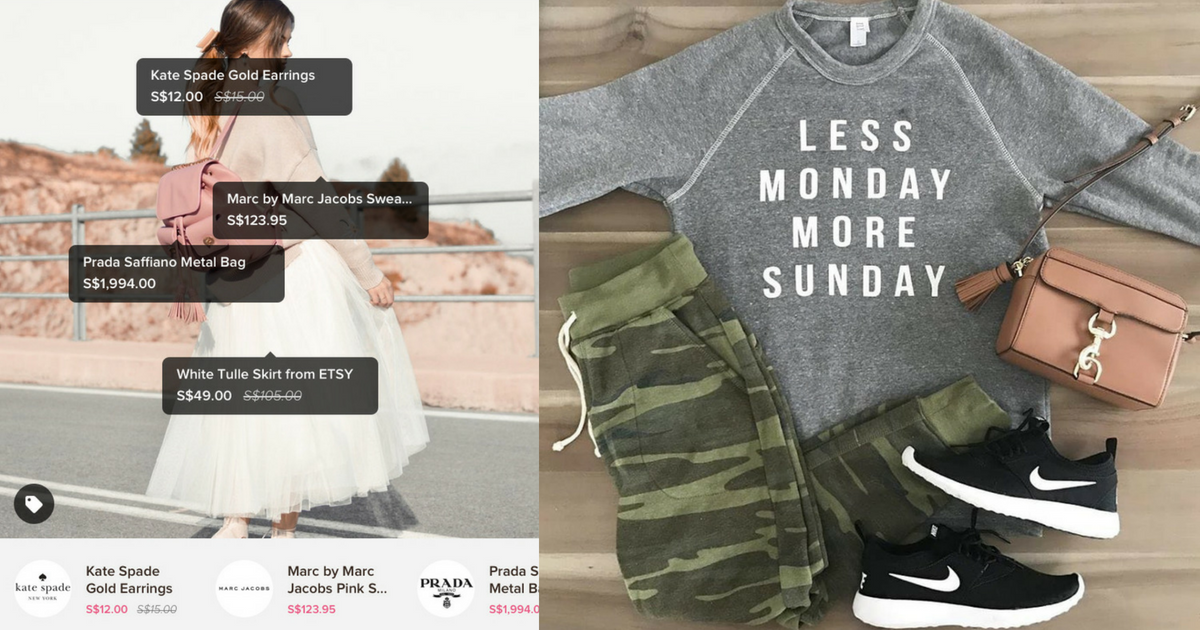 According to YOURSITE in 2017, about 73% of Singaporeans use social media for authentic or unbiased reviews, comments, and feedback to make their purchasing decisions.

The Return On Investment (ROI) for influencer marketing on Instagram in Singapore generates an average of $6.85 for every dollar spent on marketing.

But what about regular social media users like us? Can we also generate income from our day-to-day content on our social media profiles?

A survey done by Collective Bias in 2017 found that consumers are more likely to buy a product promoted by a normal person, and that celebrity endorsements are not as effective.

With that said, does that mean we can monetise whatever influence we have online even if we are not big-name influencers like Xiaxue or Naomi Neo?

This social commerce platform, co-founded by entrepreneurs Sabrina Wang and Francis Sim, gives us a chance to do just that.

Cash In With Your #OOTD Shots

PINC is a community platform that lets users post their Outfit Of The Day (OOTD) shots and then earn points from them, Sabrina explained to me.

After uploading the image, users can tag the products on the image by selecting the brands from PINC’s catalogue.

She added that every action users make on the platform gives them points, so the more content you post, the more points you get.

Users can also earn points when their friends or followers purchase an item from the tagged product in their post.

“To encourage better content on PINC, our users can ‘gift’ each other with virtual items, purchased with their PINC points,” Sabrina said.

Users can also cash out these points.

They need to have a minimum amount of USD$50 worth of points in their account, depending on the country the user is cashing out from, to withdraw their earnings.

The money will be transferred via PayPal or Stripe, but Singapore users can also choose to receive their payout via bank transfer.

At the moment, the platform is only on alpha, so users can post photos, write descriptions, tag users, create hashtags, and earn points. The product tagging feature will be ready by the third quarter of this year.

As of now, the platform is currently web-based and we can expect the mobile app to launch soon.

Sabrina had joined a publishing house and took up a separate diploma in mass communications because she felt that being a “blogger” didn’t “give [her] the fundamentals to be in editorial”.

She conceptualised fashion portal, SAUCEink, during the time she was doing her Final Year Project (FYP).

A fashion blog she started in 2004, PRINCESSA, became a community portal, to a fashion label, to an e-commerce, and finally, into being part of boutique agency Royal Privileged.

But before all of these, her first ‘startup’ was in wholesale apparel. She then moved on to gaming where she “used to run Counter-Strike servers for the then-top clans in Singapore”.

That led her to doing web hosting solutions and development which she did back when she was still schooling.

“When I was out of school, I joined a firm that does SAP. That was a good experience, how corporate life was like. Then, blogging got me better income than my job, so I moved on,” she shared.

“Eventually, [it was] through blogging – I think, I mean why else would they hire someone with zero editorial background – that got me into a publishing house,” she said with a chuckle.

After she parted with SAUCEink, she had an “out-of-the-blue conversation” with Francis which led to them starting PINC.

Made a couple more calls and the next thing we knew, we were at Quest Ventures’ office making our pitch.

Sabrina admitted she was “terrible with coming up with names” but she ended up naming her new venture anyway.

“A couple years back, we came up with this project called ‘Privileged Inc.’ because my agency was Royal Privileged, and I read PopSugar quite a bit which was under Sugar Inc; its short-form was P’INC.”

“When I was tasked to come up with a name, and I couldn’t think of anything awesome, I recycled P’INC and came up with a storyline for it,” she shared.

Besides associating it with the colour, PINC also means ‘Pin Culture’, or the culture of pinning products.

PINC’s concept was something that Sabrina always dreamt about doing, given how it would change social media marketing and e-commerce.

“[It’s] the ability to get inspiration while conveniently [executing a] ‘click and purchase’. This would effectively aid independent designers; they could sketch, draft their work, put it up and gain traction and pre-sales,” she explained.

Sabrina believes peer-to-peer influence is the next big thing in marketing, and they use blockchain because “transparency and trust” are important.

10 years ago, when bloggers were a thing, the question of legitimacy and sponsored posts became a topic of conversation. Five years ago, the same topic arose for social media influencers.

“A year ago, a PR guy that doubled as an entrepreneur and journalist was questioned and pulled out of Forbes for the same reason – trust, or lack/breach of.”

“PINC focuses on providing a space for content creators – or influencers if you want to call them that – to engage with their peers through their content to recommend products or services that are made available on the platform,” she added.

With that, both consumers and content creators gain from it.

I asked Sabrina on her thoughts on paid advertorials and why she thinks PINC’s approach won’t create advertorial fatigue.

An advertorial means a brand approaches a content creator and engages them to “paint a beautiful picture for them” to their audience, she explained.

But for PINC, they allow the user-turned-content creator to “pick the brands [they] believe in” to promote.

“The user can always choose not to tag anything at all. We still give you points for the effort of posting. It’s a choice; we’re just giving you the opportunity to make it,” she stated.

“Look at it as a reward option. You buy something; you like it, you review and recommend it to your friend, you get a voucher or discount for your next purchase.”

We’re enabling anyone and everyone to be able to more directly engage with the brands they love, without needing or having the knowledge or skillset to write a marketing proposal.

She went on to say that she does appreciate good advertorials because of the effort put in to ensure content quality is great.

“I feel that we’re smart enough to make our own decisions to buy in or not to buy into the marketing messages.”

To Inspire Trends, One ‘Pinc’ At A Time

Sabrina shared that the more users interact and engage on the platform, the better it is able to serve personalised user-generated content (UGC) that would inspire users to take an action on the platform.

“Social media platforms that have a significant reliance on UGC share an open secret: you are their revenue-making machines, and you do it mostly for free – if not, you even pay for it.”

“Amongst the billions of content creators out there, when you share and interact on the different platforms, the platforms can exploit your content and data then cumulatively earn tens of billions of dollars in annual revenue from it.”

She added, “In return, average Joes like us get nothing invariably from the proceeds.”

So PINC is setting out to “correct this imbalance” and is giving everyday users like us “an opportunity to correct the unfairness”.

PINC will be present at RISE Hong Kong 2018 and will be showcasing at BlockSpace Asia too, where they are also part of the managing committee.

With the initial funding from Quest Ventures and “numerous other partners and SMEs”, they are now a 10-person team with a few ad-hoc workers and advisors.

They will also be releasing the product tagging function in the coming quarter of the year, looking at other payment gateway partners, and will continue to improve user experience.