Aquaponics is a farming method that puts fish to work, here’s how it’s growing in M’sia 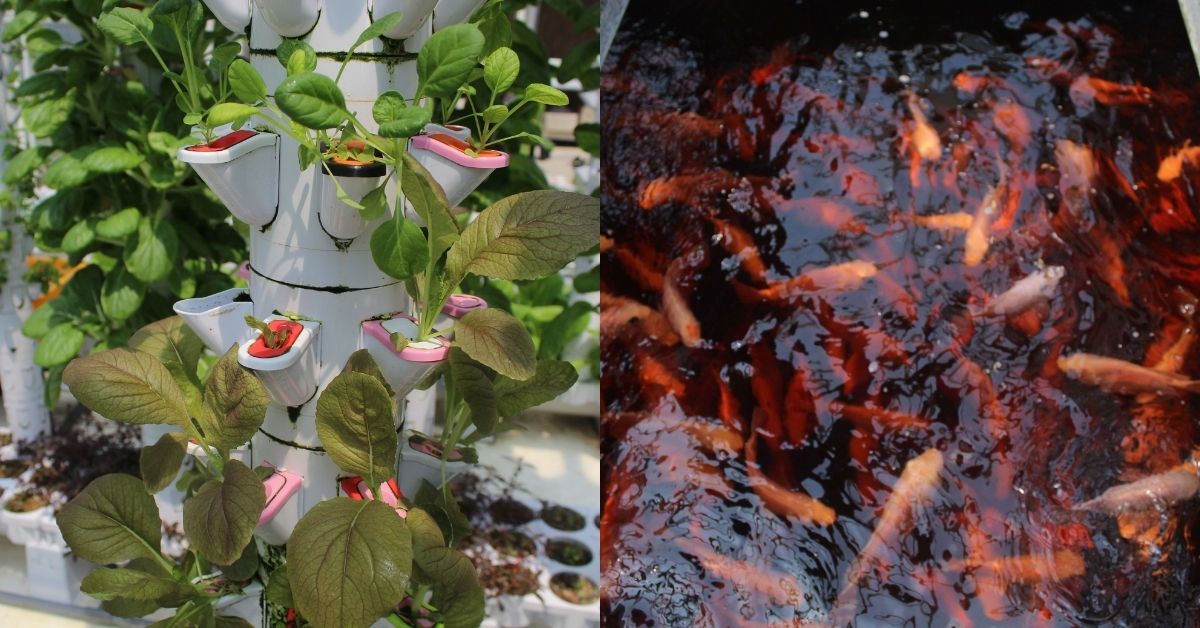 Hydroponics has become a popular term thrown around by the farming community, but oftentimes we may perhaps mistake its cousin, aquaponics, for being its twin.

Though not as common as hydroponics yet, it’s slowly gaining traction as an alternative soilless farming method in Malaysia. In short, aquaponics is a subset of hydroponics that utilises aquaculture, which refers to the plants and fish reared in the water to provide nutrients for plants.

Behind the science of aquaponics

For a refresher, hydroponics is a farming method that replaces soil with nutrient-rich water. These nutrients include magnesium, phosphorus, calcium, and other “plant food” that your crops need to thrive.

To create a hydroponic system, you’d need to invest in fresh water, oxygen, root support (like coconut fibre or rockwool), nutrients, and light.

The appeal of using this farming method compared to conventional soil-based ones is that you can grow crops pretty much anywhere while lowering the risk of diseases, limit the resources needed to set the system up, and it also helps plants mature faster, leading to higher yields.

Aquaponics integrates all of these into its farming system, with the addition of fish and other aquatic animals and plants in the water.

The science behind it is quite straightforward—fish excretion becomes nutrients for the crops as it has nitrogen (in the form of ammonia), phosphorus, and potassium, among other nutrients your crops need as mentioned. They replace the formulated nutrient-rich water.

When the plants take up these nutrients, they simultaneously clean the water so that the fish can remain healthy. While water filters are not necessary for aquaponics since it’s quite a self-sustainable system, adding a filter may improve the health of your fish and plants.

Can you replicate this at home?

“Aquaponics actually requires very little maintenance, as all you need are the right fish to be reared, the space to build your farm, an efficient water filter system, and balanced water chemistry,” shared Dr. Richard of Farm2Fork with Vulcan Post. Farm2Fork is an aquaponic hardware provider to several farms.

He recommends tilapia for beginners wanting to try out aquaponic farming, as they’re one of the hardiest fish out there that can survive a wide range of water conditions and require minimal care. Moreover, they’re delicious (yes, you can eat your aquaponic fish if it’s an edible species, unlike koi or goldfish).

In fact, you can even use lobster or crayfish for aquaponics, as shown by this Klang farm providing an aquaponic system setup and live lobsters to go along with it.

Of course, even the hardiest fish can only withstand so much, so Dr. Richard shared that having the right water filtration system can help the plants disinfect the reservoir to provide a healthier environment in the system, and make maintenance less of a hassle too.

Based on Farm2Fork’s packages, if you’re looking to farm for your own consumption, it’ll be approximately RM20,800 for a setup. This setup will take up about 60 sq. ft., and can produce about 40kg of vegetables every month.

There are other local aquaponic system suppliers like HAVVA and Aquaponics Growing Supplies, but Farm2Fork differs in the sense that it provides the tools and sets up for you, while the other two require you to hire an installer.

As for monthly costs, an aquaponics farmer from Cheras (E-Farm) previously shared with The Star that their monthly electricity and water bills are RM500 and RM15 respectively based on their system that operates with one pump.

One of the aforementioned appeals is that it’s a self-sustainable system seeing how it’s almost an ecosystem of its own. Hydroponics is a more tedious system in comparison because you need to change your nutrient-water solution every 2-3 weeks to maintain optimal pH and nutrient levels for your plants.

Similar to hydroponics, aquaponics uses 90% less water compared to soil gardening as it recycles water through the plants and fish tank. The plants grown from it are also organic as aquaponic systems are set up in a controlled environment, and using pesticides is discouraged as they’re harmful to the fish. Additionally, you don’t need to get lighting equipment to grow your crops if you have space outdoors as well.

Unlike hydroponics though, aquaponics lets you grow several vegetables side-by-side at once and Farm2Fork claims its technology can help you grow up to 10 varieties of vegetables in the same space.

Currently, there’s no conclusive study on which water system (hydroponics and aquaponics) results in a higher yield, as it all boils down to how you manage your systems.

Compared to hydroponics, there is more space required to build an aquaponic system, and it’s also more expensive as hydroponic systems cost roughly around RM4K to RM5K without installation.

With aquaponics, you have to factor in the costs of fish too. You’ll need to make sure they’re fed, and invest in light protection for the fish tanks to prevent algae from growing and competing for nutrients with your crops, or clogging up your pipes.

If you’re not a patient person, the initial setup for aquaponic farming may not be your cup of tea as you need to acclimate the fish and let the water cycle before adding the plants. Cycling the water means letting bacteria activity happen first, and this can take up to 4-6 weeks depending on the water temperature.

The aquaponics scene in Malaysia

You can grow almost anything with aquaponics; some common crops Malaysians grow are scallions, bok choy, peppers, lettuces, bitter gourd, ginger, mangoes, and even edamame and Japanese Rock Melons.

Locally, the aquaponics business scene is more focused on the supplier side of things and training on how to set up aquaponics in your own home.

To help you gauge the growing demand for aquaponics, Dr. Richard shared with Vulcan Post that they were able to set up 60 units of farms in Malaysia and overseas in countries like Singapore, Indonesia, Brunei, Japan, Slovenia, and the US since their inception 2 years ago.

But getting to where they are today required a RM300K initial investment for research coupled with continuous failures for 10 months. “So far, we have invested over RM1.5 million for the past 24 months in hardware development, and the investment is still going,” he disclosed.

Not too much research has been done on the profitability of commercial aquaponics overseas, much less locally. The general consensus is that profitability will only be achieved when the operations are at a large scale. For urban farmers, space may then be a constraint.

Despite this, it’s still a solution with environmental and cost benefits to ensure food safety and security. This is because global food production already faces countless problems such as climate change, urbanisation, and more, making the controlled and more efficient farming methods of aquaponics (and hydroponics) a welcome solution.

In a nutshell, aquaponics is a versatile farming method. But like everything else, it has its pros and cons depending on how you want to operate it, and what for.