Top Lies Every Entrepreneur Tells But Never Admits To 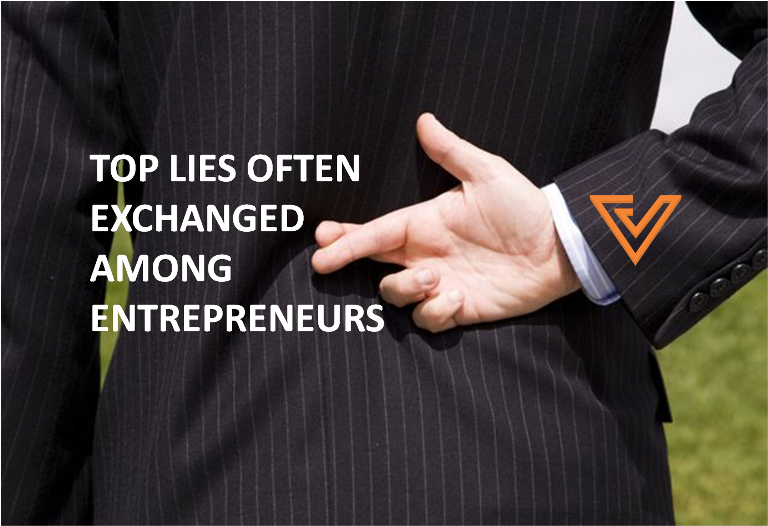 White lies are harmless and trivial, and they are usually told to spare someone’s feelings.We don’t really mean it when we say it, but we say it anyway to be polite and to fit into the norms of interaction and to be “socially acceptable”.

One group of people who are guilty of this are entrepreneurs. Simply because they need to mingle and rub shoulders with everyone to gain favours and look for potential ways of growing their startups or companies.

Here are the top lies that are often exchanged among entrepreneurs; you probably won’t admit to it, but we all know that it’s true. But if we hear it, don’t worry, we’d still nod and smile politely, because after all, that is the ‘right’ thing to do.

1. “We should totally catch up over coffee.”

This is the perfect line to hint at the possibility of working together in the future but leaving it open-ended with no serious commitment. But then again, most of the time they use it just for ending an email when they don’t want it to end too abruptly.

No, they most likely don’t. Entrepreneurs meet a lot of fellow entrepreneurs, clients, investors, friends of friends, and more. They cannot possibly remember every single one of them (unless they have a photographic memory).

Plus, it’s extra weird if that certain someone remembers them clearly and calls them by their full name and starts listing out names of mutual friends and details of their last meeting. So instead of going, “Uhhh I’m sorry, who are you again?”, they just loudly exclaim that they remember him/her and quickly change the topic by asking them about their day.

3. “We can definitely arrange a collaboration and a partnership.”

No one wants to leave a discussion on a negative note, so entrepreneurs usually end discussions with a hopeful statement instead. They could always come up with some excuse later on to let them down gently via email, so that they don’t have to say no to their face and no one has to feel embarrassed about it. A win-win situation for all!

They’d roll their eyes in their head about someone’s idea, but outwardly, they’d clap their hands enthusiastically and give them a pat on their back for their innovative and revolutionary idea.

Everyone wants to seem like they’re in the loop and that they’re ‘in’ with all the latest deets. So when someone ‘name drops’ in the middle of a conversation, it’s common for entrepreneurs to say that they know the one that’s being talked about, even when they actually have no clue.

No one likes to air dirty linen in public and so even if there is something fishy going on behind-the-scenes with other entrepreneurs, it’s better to make it seem like they get along with everyone. Yes, even if they are in the same industry and are their direct competitors.

Entrepreneurs sometimes say this during events or when they’re seen at a cafe. Chances are they are not there just to ‘chill’ but they are there to network, scout the market, or look for potential business opportunities. Whatever it is, they have something hidden up their sleeves and they aren’t going to share it with anyone else so easily.

Even if the conversation was dull and boring and they want to shoot themselves in the head, it’s just safer for everyone to end the conversation with this. Within the next hour, they’d forget everything that was mentioned during the chat and it would most likely be repeated in their next meeting.

It’s normal for others to pry and try to find out if others are sinking or floating. Thus when people ask how’s business, a common white lie would be that everything is fantastic and going according to plan. Who’s going to divulge information about the fallout that’s occurring in the company, or about their decrease in sales profit, or that they’re about to go bankrupt?

If the partnership was a major flop and if things didn’t quite go the way they were planned, most entrepreneurs won’t make a huge deal out of it. They’d simply shake the hands of their ex-partners and make mental notes to never, ever repeat the same mistake.

It could be the biggest gossip of the year but smart entrepreneurs know better than to bring it up. They would rather think of the positives and mention those instead. Or even if they don’t know who they are talking to, it’s just better to say that they’ve heard good things in general; it’s not as if they have to give specific examples anyway.