Be Malas: A Service That Gets All Your Chores Done With Just An SMS 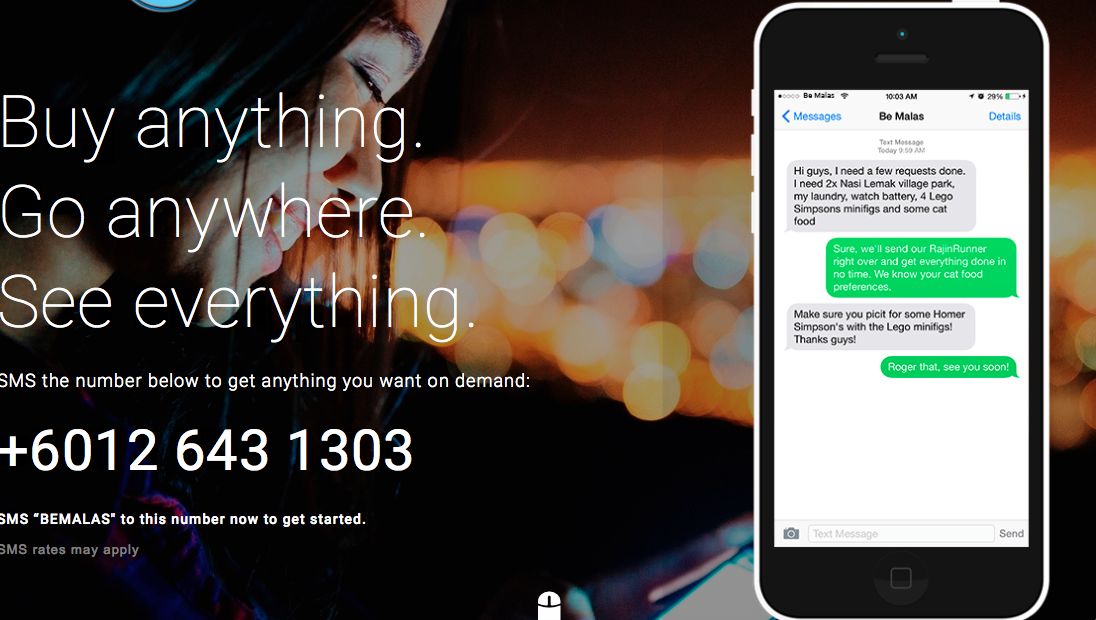 Be Malas or Be Lazee is a new Malaysian service that gives you the freedom to do exactly that – be lazy. The premise is that you spend your day doing what you love (or hate) while the team at Be Malas go about satisfying each of your whimsies with a certain level of panache.

Think of them as a team of dedicated magic elves that scour through the friendly skies of Malaysia while you nap and dream about all sorts of malice in your wonderland.

Can They Live Up To Their Hype?

In today’s Internet of things, a lot of startups create buzz around themselves through extensive (rarely well-thought out) marketing campaigns along with claims of being ‘the world’s first’ to do a particular thing (regardless of how bizarre it sounds).

Startups might even claim that they could get you a piece of mooncake from the moon but the question still stands: Can they deliver when the time comes?

So, we decided to give Be Malas a try.

On a lazy Friday morning, our team in a true Vulcan Post fashion was churning out articles with the hope that the day would end so that each of us could retreat to a nearby hill for the weekend (For our editor, this couldn’t be further from the truth as she embarks on a climb up a volcanic mountain in Indonesia. No, seriously.).

Yet in the midst of all of our ardous labour, we craved the sugary delights of Krispy Kreme and a plate (a couple of plates in fact) of buttery-chicken wings from the Colonel (KFC) himself – We’re weird like that.

In essence, we were confronted with two choices; we could either leave what we were doing, hop in our cars, drive in the scorching heat to the nearest shopping mall with the hope of finding what we are looking for, or we could let the mysterious Rajin Runners from Be Malas get us what we need.

Again, in true VP fashion we decided to go with the latter option and we began exchanging SMSs with the team at Be Malas.

Most e-commerce startups require you to interact with them either through their web app or their mobile app to get stuff done but Be Malas is not an e-commerce startup and so they communicate with their customers through SMS.

You can check out our exchange below.

As you can see, they need your tacit approval before proceeding with your order. They are very clear about what’s happening behind the scenes and they will let you know if they are unable to find what you’re looking or if there are any issues with your order.

They inform you about their base fee, which is a minimum of RM25 and it appreciates according to the complexity of the task, and you have of choice of either proceeding with the order or you could choose to cancel it.

They promised us that our food would be delivered by 2:30pm and the Rajin Runner arrived at our office at exactly 2:21pm sharp.

In short, they stood behind their promise – they should consider running for office.

The Team Who Want You To Be Lazy

Co-founded by a team of 3, Nash, Adlin and a third mysterious “figure”, Be Malas is so much more than a food delivery service. Most of their requests happen to be from people that want different kinds of foods delivered to them but they do so much more. They’ve paid summons for multi-national companies, they’ve picked up stock reports for a lady, and they’ve once even delivered clothing to a crematorium for someone’s relative who has passed away.

One thing that is obviously noticable when talking to Nash and Adlin was that they are truly passionate about what they do and they want to be able to make a difference in their users’ lives. Nash in particular said that they get satisfaction and pride when they are able to perform a customer’s request successfully.

The three founders have an extensive background in the digital space and logistics, and they began Be Malas as a weekend project a month ago and they never had a free weekend, since.

Given the traction (on a good day, they could fulfill up to a 100 requests) that they’ve gained within a short time, it proves to show that they’ve have created a niche for themselves in Malaysia.

Now, I do concede that their current base fee (RM25) is on the pricier side of the moon but I remain hopeful that this niche will attract other startups and companies in the near future and that would hopefully lower the cost at which we could get our chores and errands done.

Do note that they operate from 9am to 7pm and you can check them out here.