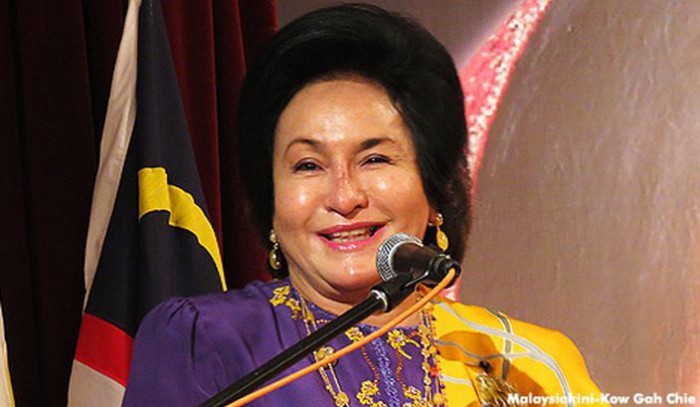 In case you haven’t been scrolling through your Facebook News Feed, Datin Seri Rosmah Mansor, who is the wife of our Prime Minister Najib Razak was recently crowned the second most beautiful first lady in “Asia’s 10 Most Beautiful First Ladies”. You can check out the full list here.

Born on 10 December 1951, Datin Rosmah is the President of the Welfare Association of Minister’s Wives (BAKTI). She holds the position of Patron for Children in Hope Foundation, Malaysian Nature Society, Society of the Orthopedically Handicapped Malaysia, Malaysia Aids Council, National Heart Institute Foundation and many more. Furthermore, do you know that she’s actually two years older than PM Najib?

If that is what being beautiful means, then Datin Rosmah certainly deserves to be in the list of Asia’s Most Beautiful First Ladies. Don’t agree? Here’s some proof to prove haters wrong.

1) She cares about the people, by urging corporate companies and NGOs to make charitable activities an ongoing practice to help the needy.

In July last year, Datin Rosmah presented cash aid to the less fortunate during a charity event organised by the Cheras Education Foundation in Kuala Lumpur. During the event, she mentioned that the people should always do good deeds, not just during the month of Ramadan.

She said, “The advent of Ramadan sees many rushing to do charity or make contributions. Make the noble deed an unconditional ongoing activity as a way of life.”

Datin Rosmah is the patron of Permata, an early childhood programme for children under four years, and the program is aimed at underprivileged children from the rural and urban poor. According to Program Permata, Datin Rosmah envisioned that if children were instilled with the right values from an early age, they would have a decent foundation upon which to build an honourable character.

In April 2013, a program called Roti 1Malaysia Charity Programme caught her attention, and she suggested that it be expanded to Permata centres nationwide. She said, “So, please give them a chance to taste croissants not only children in homes, but also in the Permata centres.”

3) Despite critics and allegations towards her, she will not stop her charity work. #HatersGonnaHate #NeverGiveUp

According to Bernama, Datin Rosmah was saddened by various allegations made against her. However, as a strong women, she said she will continue doing charity work even if the facts are distorted by irresponsible quarters.

She said during at the presentation of the Wanita Umno Nadi Negara Award 2013, “Although saddened by such allegations, I will not overreact, give up or give in to their words.”

Last year, thanks to Welfare Association of Wives of Ministers and Deputy Ministers (Bakti), 18 charity organisations received donations in conjunction with the Chinese New Year celebrations. And who’s the president you asked?

5) She was rewarded an honorary doctorate award from Curtin University for her dedication to education, particularly early childhood education.

In 2012, Datin Rosmah was conferred the honorary Doctor of Letters degree by Curtin University in recognition of her efforts in the development of education, particularly children’s education through the Permata Negara programme.

6) She can sing in Mandarin but be a good sport.

Datin Rosmah was invited by the emcee to sing a Chinese New Year song at the Penang state BN Chinese New Year (CNY) open house held at the Han Chiang College in 2013. I think she pretty much slayed it.

7) She takes care of how she looks by putting effort in her fashion and style.

Confessing her love for fashion and bright-coloured batik prints, Datin Rosmah shared her passion for fashion and offered advice to batik designers during her speech on the launch of the 2014 National Craft Day.

“There are times when local batik craftsmen use the wrong colour combinations, making the batik look chaotic. This is when I tell them that you have to have a theme for batik… you choose your theme and then work with it. This is where following global fashion trends works as it will then make it easier to market our local batik to fashion houses (and fashion-lovers) around the world,” said Datin Rosmah.

8) She knows how to complete her outfits with matching designer bags to look good.

Datin Rosmah is also well known for her taste in designer bags, such as Hermes and Birkin.

9) She loves to play badminton.

Datin Rosmah claimed that she loves to play badminton, but currently it is difficult for her to find time to play as she believes that her time should be spent in service to the Malaysian public.

She described badminton as a game of the nation. “Badminton is a game of the rakyat and I am honoured to be the patron. I, myself, like the game a lot. I hope there will be cooperation from all parties to make the sport successful,” she said.

10) She is also the president of the Girl Guides Association of Malaysia.

Rosmah said that their value was in line with their slogan and philosophy ‘Always Ready’, ‘Care Giving’ and ‘Help People Always’. “Through community activities, the Girl Guides provides a platform to the public, especially the target group, to inculcate a caring attitude, volunteerism and love among our girls,” said Datin Rosmah.

As you can see, Datin Rosmah wears many hats. Being the first lady is definitely not an easy job. Here we say congratulations to our very own first lady for making it to the list.