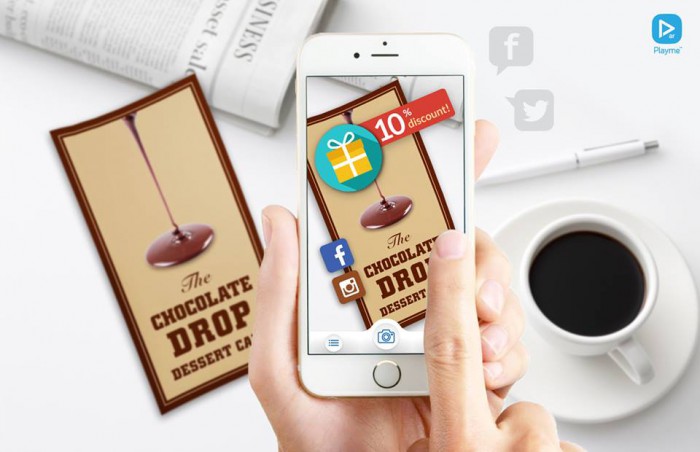 Human expression and creativity has no bounds—and it shouldn’t be limited by time, space and dimension either—it should be brought to life! Startups, businesses and entrepreneurs spend huge amounts of money to produce content that’s eye-catching but they often fail to make their content interactive.

And in today’s world, there are so many things vying for our attention. If we walk down a street that’s filled with posters and banners of different startups, products and companies, how would we behave? Would we pause and take a look at each and every poster?

Bringing content to life to provide a more immersive experience could be the next big thing—and it’s one that augmented reality startup PlayMe AR is hard at work at.

“Augmented Reality to us is the next step of digital medium such as how Internet is after the TV, and smartphone is after the Internet. We believe that it is beneficial to the commerce industry in selected areas where there is a sound marketing concept behind them.”

“Augmented Reality is not to be used to only wow clients but also to provide sound information for users. 3D layout for property developers, hologram spokesperson for a product/education are some of the examples,” the team said.

PlayMe AR is a simple DIY augmented reality creator platform that places in your hands the tools to translate the experience of augmented reality onto print. For example, when you position your smart device with the PlayMe App over a poster or paper, you would instantly be able to view additional content (video, sound, etc.) that you would otherwise not be able to see.

Think QR codes on steroids and other performance enhancing drugs.

“A user can easily upload their AR Design (Tracker) which sets as the foundation of tracking point. Next the user can easily upload their desired digital content (product image, AR Video, AR hologram video, Web buttons, custom images). The last step is to adjust the positions of the assets then publish them into the PlayMe AR server, ”the team explained step by step.

With the platform, you can help your audience connect online easily and engage with your content, they can even share their experience on social media platforms and so much more.

PlayMe AR is the brainchild of 3 co-founders—Iz Phang, Winson Tan, and Alvin Ooi—who came up with the idea back in October 2013 and they officially began production in February 2014.

While disruptive startups aim to disrupt the market that they are operating in, PlayMe AR is only here to support the offline channels of advertising content and take them to the next level.

With A Big Vision, Comes Many Problems To Solve

However, many of their early clients didn’t know how to implement the technology and the team had to showcase a lot of case studies to illustrate the possibilities of the platform.

“Many wanted their own white-labeled application,” the team added. White-label products are products produced by a company that other companies (marketers) rebrand to make it appear as if they made it.

Since then, the team has been working on designing piles of samples and demo videos that showcase the use of the AR app. They have also gone a step further and created a new business model that provides their clients with a white label app that runs on the Playme Ar Creator backend engine.

“We are also in the midst of making a customisable logo and splashscreen for those who want a white label application powered by Playme AR,” the team added.

The team said, “The basic problem with all AR applications is that they all run on their standalone servers that are not interconnected like the Internet or how QR codes are based on a set of standard protocols. These are some of the reasons that stops people from having an AR enabled function into their own camera.”

The fundamental problem here is that you need to have the PlayMe App installed on your smart device if you want to experience the AR that’s created through the PlayMe platform. Expecting all of your audience to have the app installed on their phones just so they can engage with a flier is definitely a pipe dream.

To combat the issue, the team is working with the local tourism sector and brands, and they are also allowing individuals to use the PlayMe AR Creator at a lower cost, with the hope of creating great content first that will eventually be used to draw users towards the application.

Bringing The Future To Life

With regards to the future the team said, “Malaysia is a 15-20 million strong smartphone population and we believe PlayMe AR will grow along these line to have a strong user base in Malaysia. We are planning some tourism projects, and also some private projects that we’re still unable to disclose.”

“We work closely with publications and will roll out more white label apps to ensure business growth but also to focus on the smaller users to use PlayMe AR app as an alternative option or a more affordable plan.”

“We are currently raising our seed funding to facilitate scaling and of course the opportunities presented in Malaysia is abundant that allows us to test and tweak PlayMe for the better opportunities,” they added.

While bringing printed content to life and making it more interactive is definitely a noble aim—an aim that has its fair share of challenges—it’s still way too early for it to have a major impact in Malaysia.

PlayMe AR has to continue to figure out strategies and tactics to get both content developers and users onto their platform. While prioritising one consumer group over the other may make sense early on, the truth of the matter is that content developers will only consider the platform as a viable option if the platform has a sufficient user base. Likewise users will only download the app if it’s a necessity.

So, I can see myself downloading the app if I’m attending a conference and if it’s a must but I wouldn’t be downloading it out of “free will”. At least not just yet.

That being said, I did download the app to scan the hologram and video on PlayMe AR’s website but I didn’t see anything happen—I probably am doing it wrong.

Despite the challenges and the state of the industry in Malaysia, it does leave me with a sense of optimism given that the team is passionately developing their platform to accommodate different consumer and business needs.