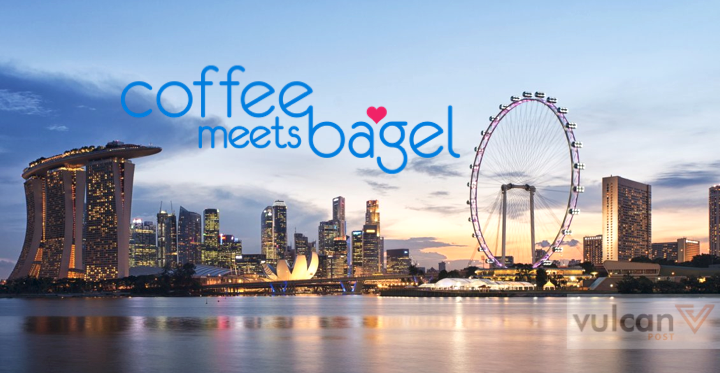 For the longest time, singlehood has remained one of the most pressing problems in Singapore. To put this in context: back in 2004, there were 844,100 Singapore residents who were singles — that number rose to 1,048,100 in 2014, an increase of almost 25% over 10 years. While the population of Singapore did increase proportionately in the last decade, the fact that over 1 million people are single in Singapore (which has a population of about 5.4 million) can be a worrying thought.

Perhaps that is why over the last few years, companies such as Lunch Actually, Paktor, and Tinder have been actively looking to capitalise on this opportunity, hoping to solve the problem of singlehood with technology.

And joining them on the quest to hook up more singles in Singapore is newly launched Coffee Meets Bagel.

Started by three sisters, Coffee Meets Bagel aims to attract busy young professionals who are looking for something in between a hook-up and a serious relationship. It is also positioned as a dating app designed by women, for women.

Originally launched in New York, the app is similar to LunchClick, which sends all users a potential match everyday at noon. Your match is determined by your preferences for age, religion and your Facebook profile. If both you and your match mutually “like” each other, you can then chat the person up.

Unlike other dating apps, Coffee Meets Bagel has a heavy gamification feature: you earn coffee beans by inviting friends, filling up information, or taking other actions. These coffee beans can then be used to purchase special features such as revealing your match’s mutual friends or going back to a missed match. Of course, you can also purchase these coffee beans in-app.

Coffee Meets Bagel first popped up on our radar when we saw them on Shark Tank, one of the most popular reality TV shows in the United States. On the TV show, entrepreneur and investor Mark Cuban offered a cool $30 million to acquire the company, but it was swiftly rejected by the Kang sisters, knowing that they would be growing even more.

According to The Fiscal Times, there are currently over 21 million users on Coffee Meets Bagel — mostly in their 20s and 30s — all around the world. So far, Coffee Meets Bagel claims to have helped 10,000 couples meet each other, and that over 120 marriages have resulted from their service.

Will Coffee Meets Bagel be successful in Singapore? We certainly hope so. In the meantime, we will be waiting patiently for our bagels to show up.