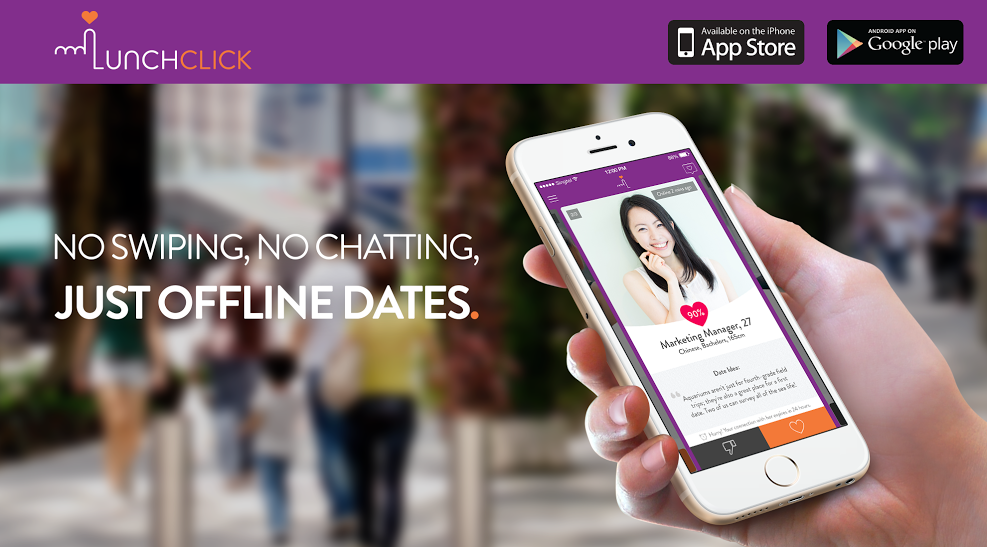 It’s a perpetual problem that many singles on dating apps face: while there’re matches aplenty, it’s rare to find someone who’s looking for a meaningful, committed relationship. And judging from anecdotal evidence, the likelihood of drowning beneath a sea of thinly-veiled hookup requests if you’re a woman is far higher.

You might know Violet as the co-founder of Lunch Actually, Asia’s largest lunch dating agency for single professionals. With 11 years of matchmaking experience under her belt, Violet is now aiming to enrich the mobile dating experience for Singaporeans.

“The market is crowded with apps which appeal to people looking for fleeting encounters, or who’re merely browsing to see who’s out there,” she explains.” Singles looking for a serious relationship find it daunting to filter through these casual daters, to look for other like-minded and genuine daters.”

If you’ve used popular dating apps such as Tinder or Paktor, you might find using LunchClick a revolutionary experience. While the key premise is the same — matchmaking those looking for love — Violet’s commitment to catering to serious daters results in some very unique features.

Firstly, Singaporean singles are required to enter not only basic details like their occupation and height, but also their NRIC number. This is a safety feature to ensure that all LunchClick users are who they purport to be — haven’t we all heard horror stories of Prince Charmings who stole profile pictures and names from others or worse, were married and simply looking for some fun on the side?

LunchClick, Violet says, is the first app that will do manual NRIC checks with Singapore’s Registry of Marriages (ROM) and the Social Development Network. If you’re wondering, the approval process takes only a few hours — that’s a small price to pay to prevent nasty surprises further on.

You know how half the fun of Tinder is compulsively checking your phone to see how many matches you’ve got? The pretty much limitless number of swipes you have means that the thrill of a match is converted into an ego boost — rather than the excitement of a potential relationship. In addition, Violet explained, female users are at a disadvantage on such swipe-heavy apps: in her personal experience, her female friends took a moment to deliberate before swiping, while her male friends played a “numbers game” by swiping right and choosing later.

Because of this, LunchClick works on the philosophy that “more is not always better”: you’ll only receive one match a day, with 24 hours to decide if you want to ‘like’ or ‘pass’. Without the illusion of unlimited matches to keep you swiping, you’re pretty much forced to consider each match seriously. And with each match coming at noon precisely, you’re safe from getting helplessly addicted to swiping every spare moment you get. As Jia Qing, one of the 2000 singles who tried out the beta app, pointed out, “It doesn’t take up too much of my personal time.”

One potentially contentious feature of the app is its ‘Q&A’ style of interaction: even after you’ve made a successful match, you won’t be able to chat with your partner directly. Instead, you’ll only be able to ask your match a series of multiple-choice questions about their values, interests and aspirations.

Sounds clunky? Clearly, there’re pros and cons to this multiple-choice format. The most obvious drawback would be limited self-expression: no matter how many options each question comes with, most of the subtle things we pick up about someone’s personality are through the way they craft their words (and nowadays, the emojis they add on). There’s very little way that a bunch of pre-written answers can really help you get to know a person. It’s almost like talking to a robot.

The surprising thing is that despite its evident downsides, LunchClick’s ‘Q&A’ format might get you further in understanding someone than the usual apps. To illustrate this, Violet brought up the way text conversations in dating apps usually go: “So the guy says hi, the girl says hello, the guy asks ‘What are you doing?’ The girl says, ‘At work’.” No one enjoys the first phases of getting to know someone; it’s always mundane at best, awkward at worst. If, like me, you’re a terrible conversationalist, LunchClick’s repertoire of personal questions promises to get you through the bullshit and to the interesting parts: what’re your match’s thoughts on babies? What about getting drunk together? You get to ask these without imagining your match making a judgmental face at his phone.

So, what happens once you’ve finally sent a date proposal through the app, met up with your match, and had a good time (fingers crossed)? The most innovative feature of all that LunchClick offers is post-date feedback. Don’t worry, your complaints about your date’s lack of punctuality will be kept confidential — through the app’s algorithm, the feedback you send will be used to get you more accurate matches in the future.

Is it starting to sound better than Tinder already? The icing on the cake is that for LunchClick’s introductory launch, they’re planning to sponsor the first 500 dates confirmed through the app — 1000 users will have their meals covered at local restaurants like The White Rabbit and Arteastiq. I’m almost tempted to get a guy friend to download the app, just to enjoy a free meal. Then again, it’s definitely worth trying out the app for real — who knows if I might actually meet someone.