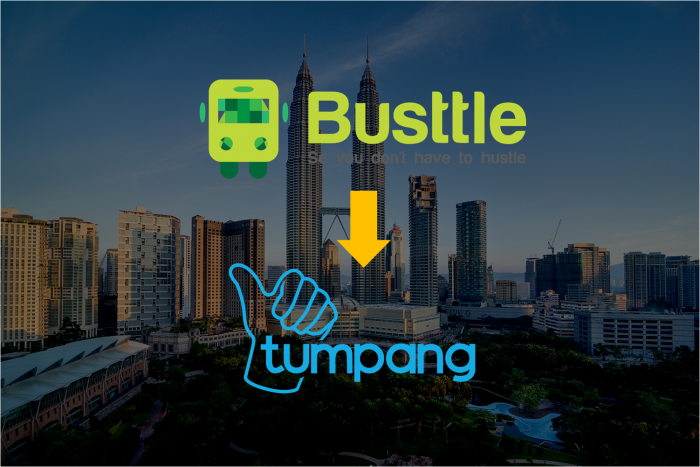 If all these sound familiar, that is because Tumpang was formerly known as BUSttle. The team has unveiled a new logo and brand on September 1 on their Facebook page. That being said, BUSttle is now called Tumpang and they are no longer using the green coloured bus as their logo.

In regards to their new brand name, Dhillon told Vulcan Post that the main reason behind the changes is to avoid confusing the end users. He explained, “It seems most people were under the impression that we were a fixed route service rather than an on-demand one. Also a lot of people expected a ‘bus’ type vehicle to show up rather than a taxi.”

The logo, which was originally a bus, has also been changed to a thumbs up. This seemingly universal gesture consists of different meanings in various cultures. If you are in countries such as Italy and Greece, the thumbs up is equivalent with the middle finger (Oops!); but over the years, the thumbs up has become the typical hitchhiker’s gesture, or a sign of agreeing with others on social media platforms.

Dhillion explained, “It [thumbs up gesture] is the universal symbol for ‘hitching a ride’ or to ‘tumpang’ which is precisely what we offer—flat-rate ridesharing for the last mile.” Thus Dhillon affirmed that the changes should be able to reduce the confusion among current users and new ones.

The ride sharing culture is not new in Malaysia. We have been encouraged to carpool since we were young in an attempt to reduce the high populations of cars. However, the term carpooling might not sound relatable because we usually use the term ‘tumpang’ which is a pretty localised term.

Seeing as there are many expats and foreigners in Malaysia, the name Tumpang might not appeal to them, so we asked the team if that is a concern. Dhillon said the term probably won’t make much of a difference to them, plus it easier to pronounce compared to BUSttle. “It is a word [tumpang] pronounced pretty much phonetically, unlike BUSttle which could be mispronounced in a few ways.”

Apart from that, Dhillon is also certain that the name will not limit their brand expansion plan, as the word ‘tumpang’ itself is widely understood in countries that speak the Malay language, for example Singapore and Indonesia.

One thing the Tumpang team has to bear in mind is that there is a similar startup named Lompang that links hitchhikers with private motorcyclists. Both startups work differently, but the name pretty much carries the same meaning.

Blue Is The New Green

Many companies have started using blue as their main colour as the colour is now becoming the new green, whereby blue represents cleanness and efficiency.

For instance, as quoted in an article in The Economist, Volkswagen puts a “BlueMotion” badge on its most efficient cars and Mercedes-Benz adds a “Blueefficiency” emblem to its environmentally friendly (and easiest to recycle) models. This is precisely the reason Tumpang decided to use blue as their new brand colour.

Dhillon explained to us “We want to choose a colour that differentiates and sets us apart from our competitors (not just competitors per se but other ride-hailing services) yet be dominant enough to be very visible.”

Besides the major rebranding from BUSttle to Tumpang, one thing that the team did not change is their mission to offer their services at an affordable rate. That being said, the ride fare remains the same at RM5 per ride and they are still targeting riders who wish to travel within short distances but don’t wish to pay for the exact distance travelled and travelling time.