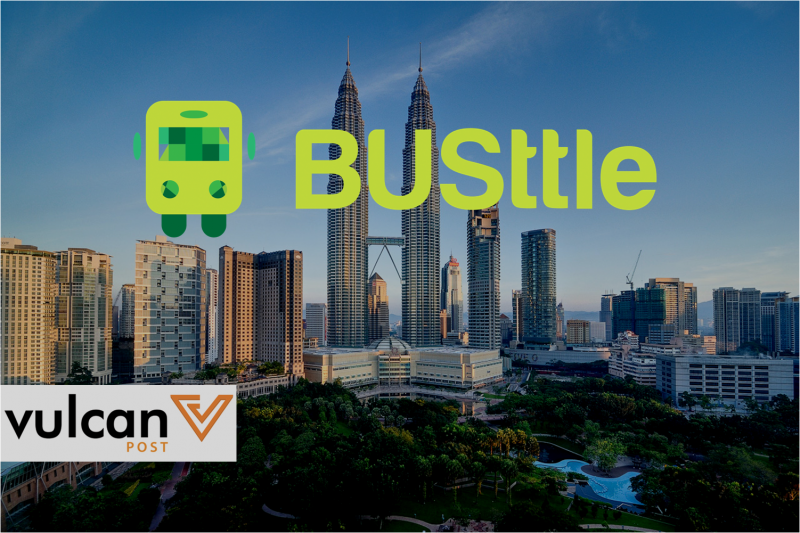 BUSttle, the first eco-friendly ride sharing service in Malaysia, rolled out three months ago and started their service in Cyberjaya. Unlike other transportation startups such as Tripda or Uber, BUSttle is operating a ride-sharing service that only works within a small geographical location to provide an efficient and affordable public transport service.

BUSttle has been doing quite well since they started. In fact, co-founder Dhillon Kannabhiran admitted to us that he was doubtful of the public’s reception towards the service when they launched—whether people would be willing to share their ride with others.

Nonetheless despite their doubts, the reception has been great so far in Cyberjaya, which led to them to recently expand the service to Taman Tun. Dhillon also added that one of the high moments since the launch of BUSttle was when they were asked to provide transport for Microsoft Imagine Cup, a world-leading student technology competition.

Praburaajan Selvarajan, the CTO of BUSttle who started his own company at the tender age of 18, shared that none of the ideas he had over the years excited him as much as BUSttle did.

“The highs for me thus far has been the feedback we have received of how BUSttle has been improving our user’s lives, that’s been the most gratifying part of running BUSttle,” Prabu said.

Starting a startup has its setbacks. Prabu told Vulcan Post, “We get much less personal time, less sleep, but it’s all been worth it so far, and we look to bring BUSttle to more users, so it’s going to be this way for a while I reckon.” Apart from that, the team encountered some challenges when they launched the service, as many people have the perception that ride-sharing is equivalent to cab hailing.

“One of the challenges that we faced was to educate the user on what ride-sharing is, it’s something that’s not been done in this part of the world yet and we had to constantly keep in touch with our users and get them accustomed to this concept of ride-sharing,” Prabu remarked.

So what are the differences then?

A ride-sharing model means that the transportation provides is one car to many passengers. For BUSttle, they aim to connect the last mile and serve neighbourhoods and other small geographic areas (2-3 km radius).

“You can’t BUSttle your way across town, for example. You use us when you want to head to your neighbourhood restaurants, to the LRT/MRT or when you’re heading out for lunch with your friends and colleagues. We also offer fixed fare trips as opposed to charging passengers either by time or distance travelled,” Dhillon explained.

Plus if you BUSttle with friends, the fare gets cheaper—thus the ride-sharing concept.

Another important thing to note would be BUSttle has specific pick-up and drop off locations (unlike taxis which have no set locations). To see the full list of the locations, all you have to do is visit http://bustl.me and select the area that are travelling in (currently either Taman Tun or Cyberjaya).

The locations range from malls like 1 Utama, to popular eateries such as Domino’s Pizza and Starbucks Coffee, to residential buildings such as condominiums and apartments, and to streets with shop lots.

So for example, a BUSttle user staying at Villa Flora Apartment in Taman Tun can travel from the apartment to McDonald’s to buy lunch, and then head right back to the apartment. The cost of the ride will be more affordable than taking a cab, and if you’re going to McDonald’s with friends, the cost will be cheaper.

The same goes for users who want to travel to 1 Utama with their friends but don’t want to worry about driving through traffic or looking for a parking space. BUSttle operates from 7am to 11pm so from early morning till nearly midnight, you won’t have to worry about travelling within your neighbourhood.

Finally, unlike other transporation services, BUSttle offers a subscription service for frequent BUSttle users. The BUSttle 50 package offers 12 rides for RM50 a month, since each ride is RM5, subscribers of this package can save RM10 from the original total of RM60. The BUSttle 100 is RM100 a month for 24 rides (save RM20), and the BUSttle 150 is RM150 for 36 rides (save RM30).

Or you can just use without signing up for a subscription package for RM5 per ride.

Despite constantly being compared with other taxi-booking apps, you might be surprised to know that BUSttle doesn’t have a mobile app, yet. However the team thinks that a native app would certainly allow for a much better user experience and they’re currently in the midst of raising a seed round to make it happen.

BUSttle otained initial funding from the Watch Tower and Friends/Cyberview Living Lab Accelerator programme and now they want to take things further with their next seed round.

“We’re currently working on raising our seed round, which would be used to get our technology updated by adding iOS and Android native apps into the fold, to better the experience for our users, apart from that the funds would be used to bring BUSttle to more locations,” Prabu shared.

The BUSttle team selects neighbourhoods which are located near the LRT or MRT line, and have universities or colleges, this is so that they can supplement the other transport choices which are already available. If you want BUSttle to come to your neighbourhood, go ahead and persuade them at support@busttle.com or drop them a message at their Facebook page.

“We’re now looking into expanding to Bangsar as well as Damansara Perdana. After which we’ll most likely be rolling out in Sunway and Bukit Jalil,” said Dhillon.

BUSttle was not created to reinvent the wheel but to provide their service as your neighborhood chauffeur. Dhillon said, “We look at BUSttle as a brand new ‘class’ of service for Malaysia and South East Asia—something that didn’t already exist in the market—a last mile service that’s more convenient than waiting for the bus but at the same time cheaper than taking a taxi.”

BUSttle is poised to cater to the needs of people who want to travel within short distances but don’t want to pay for the exact distance travelled and travelling time. It combines the concepts of taxi-booking and carpooling by offering their services at an affordable rate, and that’s what gives them the edge in the transportation industry.

Sign up for BUSttle now here and receive RM20 worth of free rides.