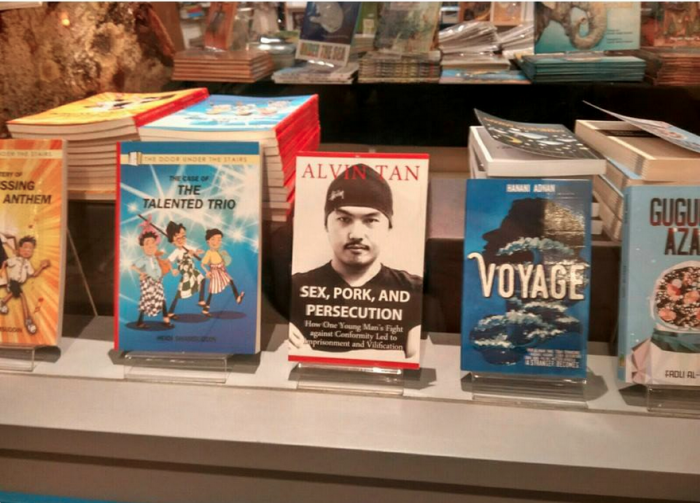 Given the controversial and ‘seditious’ nature of both the book and its author, I jumped on the opportunity to get myself a copy from Silverfish Books because I had a feeling that it would soon be banned or some likely karmic event would soon occur that would stop the book from being sold.

And I was right.

Alvin expressed his carnal desire towards a particular woman on his Facebook page (as he commonly does) and because of that, his books aren’t being sold in Silverfish Books anymore.

I won’t go into detail about what was said and whether he should have said it—there’s no point in having a debate on free speech and its boundaries—I’m just going to take the “politically-correct route” and simply blame everything on Alvin Tan.

I’m not going to lie, at first glance I thought the book was just going to be a testament of all of Alvin’s sexual conquests. Sadly, it wasn’t.

Well, there were a few interesting moments, especially when he learnt the joys of “self-bonding.”

Here’s an excerpt taken from The Obligatory Chapter on Sex:

“One rainy afternoon in September 2005, my roommate went out, so I seized the opportunity to indulge in some self-bonding. This time, I was determined to really milk it all the way. I cheated a little by stimulating my nipples with my other hand and picturing some topless girls tanning on a nudist beach, and, by the ten-minute mark, I felt a tingling itch along my penis. This itch, however, was funny; the more I eased it, the itchier it became. So I shuffled harder and faster for the last thirty seconds or so, and then, BOOM. PROTEIN EVERYWHERE! Holy Sweet Jesus Mary Mother of Joseph, what a humongous sensory payoff.”

While that excerpt might take you a trip down the memory lane, it’s just about as much action as you’re going to see in Alvin’s book.

In actual fact, this book provides you with more insight into Alvin’s perception on various matters of concern than anything else.

On Career, Marriage and Legacy

What motivates a person to dedicate themselves to a particular career, lifestyle, religion and/or a person? Alvin, in the book’s first chapter—The Young Man’s Ultimate Dilemma, reasons that most people make decisions related to these issues from a place of fear, financial incentives or either in response to societal pressures.

He talks about the question every teacher would ask a kid: what do you want to be when you grow up? Obviously the way we answer this question in our teens would be completely different because we now have to live  up to  people’s expectations of us.

Alvin writes, “I’d personally always try to follow my heart instead of conforming to the expectations of others.”

While that may sound like a cliché, it’s a method worth pondering upon as it doesn’t just apply to careers alone.

Alvin highlights that once you do get married, you can’t live for yourself and that you will be in servitude to your spouse for the rest of your life. In essence, you can either choose to selfishly live life for yourself or selflessly sacrifice your life for another—neither path is void of consequence, trouble and mishaps.

A lesson that’s definitely worth picking up from that chapter is to reason out the “whether” and “why” before signing up for marriage.

Our immediate families are often the people that play a major role in shaping our reasoning skills, our beliefs, our morals and the way we do things. That doesn’t mean that we can’t pursue a completely contrary lifestyle just because the people we grew up with lived in a particular way. We can.

Throughout the book, you will notice a common theme of defiance. And by defiance, I’m referring to Alvin’s perseverance in going against the norm primarily because people refrained from providing him with rational explanation for their beliefs.

Morality is commonly perceived as either being subjective or objective (determined by the majority). He argues that there’s no such thing as universal morality, primarily because morality is a matter of opinion, and not fact.

According to him, one way for an opinion to be more favoured is to obtain popular support. For example, if most of the population begins to believe that eating chicken is immoral and that there are eternal repercussions for those that who continue to do so, then you better believe that you’re going to be persecuted the next time you step foot into KFC.

While that does sound true, I sometimes wonder whether having the knowledge that a particular action is wrong would actually stop them from doing that action? I assume alcoholics, drug addicts, or even white criminal collars like Bernie Madoff understand that their actions are of harm to others, therefore it’s ‘morally’ wrong. Most objective moralists would argue that if an action causes harm (mostly physical) then its wrong but in doing so they raise another problem.

If your version of truth (always helps to comprehend what truth really means) contradicts mine, who then do we side with? Wouldn’t we favour the popular opinion?

If that’s the case, then I don’t think it makes sense to demonise a majority for holding a particular opinion, when we would do the same to them when the tables are turned? Or does it?

A good portion of the book deals with the trouble he had to go through while dealing with political groups, hardliners, and the police, and also during his time behind bars. I will refrain from giving you specific details so that you’d actually buy and read the book.

Regardless of how right—or wrong, depending on which side of the fence you’re on—his actions were, one truly has to admire his balls (figurative ones) in standing up for what he truly believes in despite adversity. Many drift through life (including myself) trying to be someone else because being “fake” is always a cheaper option than standing up for who you truly are.

Being yourself might often mean that you have to endure people’s distaste for you, you might have to deal with their hostility or it could be as simple as you not being invited for a get-together. The toughest part of being “who you are” isn’t just being a little different from everyone else, like having an eccentric hobby or looking physically weird, it’s a lot tougher when the person that you are goes against basically nearly everything that is considered as the “norm”.

He writes, “Self-awareness further leads to greater courage, because there are now less unknown variables.” Also, “How much can you possibly know about yourself if you’ve never been in a fight?”

That being said, try not to fight your way into prison, it’s not a fun place to be.

When living life, one can subscribe to a worldview that teaches either restraint or indulgence. Depending on the circumstance, one can either practice restraint in exchange for something of higher value in the future or you can indulge knowing that YOLO (you only live once). Either way, you will be the one that’s going to be held accountable.

If you read the book with an open mind, you’ll pick up pieces of wisdom that you can try and apply to your life. At the very least, you will feel challenged to question (or it might even further strengthen) some of the beliefs and principles that you have. Personally, a maxim that I got from his book that really stood out for me is, “Finish what matters; be finished with what doesn’t.”

If you’re interested to read Alvin Tan’s book and draw your own conclusions, you can get it from this website. Even from the first few pages, you’d have a feeling that it’s about to be a good read:

The author also did not use a ghostwriter; he actually sat down in front of a computer and typed out the words you read in this book. People who use ghostwriters are dicks.

Also Read
I Tried Social Popping For The First-Time – This Is How It Went
Categories: Lifestyle, Opinions, Luminary, Entertainment, Malaysian