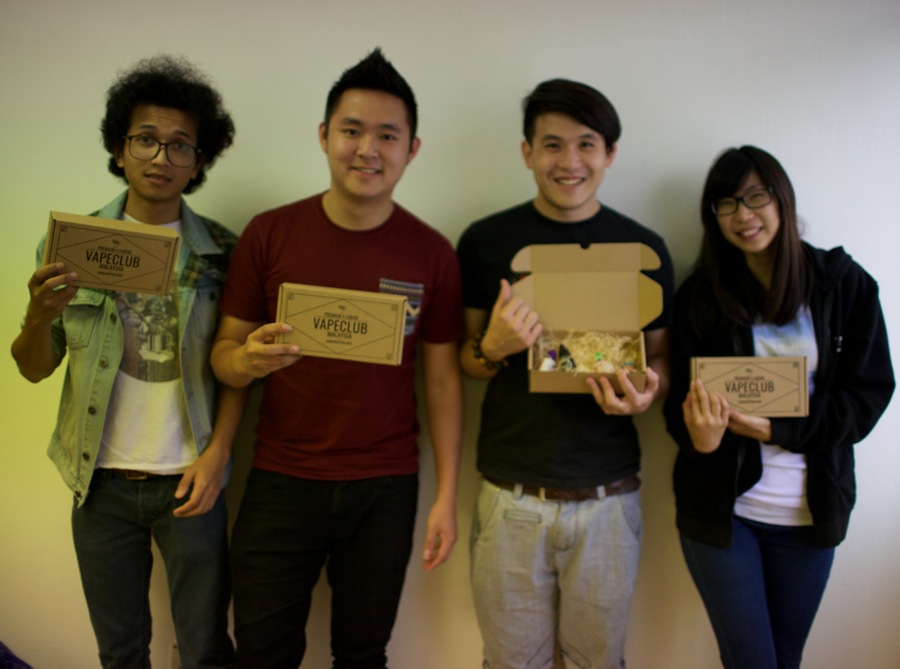 Head on down to your local open-air eatery and you would certainly find several vapers who are indulging in their tobacco-free alternative to the cigarette. The vaping scene is a huge industry in the United States, and now it is gradually growing at a steady rate in Asean countries as well.

Vape retail stores are mushrooming up everywhere, but for Jeremy Ong, a vaper himself for the past four years, he decided to do something different instead by starting up a vape juice subscription service known as VapeClubMy. It serves as an avenue for vapers around the world to try new juices from brewers in Malaysia.

Jeremy, who founded VapeClubMy alongside passionate partners Ken Foo, Ikhwan Khaliq and Jeannette Goon, recognised the fact that in regular vape retail stores, there are too many juices to try all at once. “With so many different smells in the air, it can be difficult to detect all the flavours in a juice,” he said in an interview with Vulcan Post.

Jeremy once even experienced buying juices that tasted good at the store but tasted different when used with his own equipment. He noted that retailers can be pretty busy and may not have the time to talk about tasting notes with each customer.

This can turn off first-time vapers who may find the experience of heading to a brick-and-mortar store quite intimidating. A light bulb went off, and he thought why not a juice subscription service? Therefore VapeClubMy hopes to provide users with a better experience through their premium services.

“I asked around and found that this was something a lot of people were interested in. From there, I started looking for partners who were as passionate about this and wanted to come on board,” Jeremy said.

A New Way Of Purchasing E-Juices

VapeClubMY offers users a whole new way of purchasing their vape juices, with a myriad of flavours to choose from. Via the website, vapers can either opt for a trial service or subscribe as a member of VapeClubMy, and this will entitle them to a total of 4 bottles of 30ml e-juices. The boxes will then be delivered straight to the users’ doorstep for absolutely free of charge.

What makes VapeClubMY different is that they offer a flavour preference survey which allows users who sign up an account with them to fill out information on the sort of flavours that they like, such as creamy or fruity, as well as flavours that they do not like. This allows the vape juice subscription service to better select flavours for the next juices that users wish to purchase. “Love teh o’ ais limau, but hate durian? We got you covered,” said VapeClubMy.

However, in order to make sure that there are no hiccups on the process of selecting one’s preferred flavours, Jeremy added, “Once users receive the box, we collect feedback and add on the info that each user provides to his/her user profile so that we can better select juices for them for the next box. We want this to be a truly premium service.”

VapeClubMy aims to be as unique as possible in terms of the juices they provide. “If our subscribers like the juices that they have tried via our service, they can simply head over to their closest retail store to buy more of it,” said Jeremy.

Business Is All About Trial And Error

As with all businesses whether brick-and-mortar or e-commerce, there is definitely a season of trial and error, and the same can be said about VapeClubMy. By starting up the company, the co-founders agreed that no startup will succeed without going through a tough cycle of trial and error.

In fact, “Learning to get up after getting knocked down over and over again is the ultimate test of your endurance and perseverance,” said co-founder Ken Foo. They were frank when they said that indeed, startup survival can be extremely tough. “There are a lot of challenges in growing a new business model on a limited budget. Having a good team is imperative to a startup’s success,” said Jeremy.

It’s a good thing then that Jeremy has built a core team of four who is able to guide him on the inception of the company and growing the seed of his idea. The rest, as they say, is history, and to date VapeClubMy has already started garnering overseas subscribers, alongside their local ones.

Vapers Can Expect More In The Coming Days

With their growing customer base, VapeClubMy is looking to roll out their next box sometime next year and these boxes will contain vape juices from overseas, as currently the juice subscription service only offers one type of box containing vape juices from Malaysia.

With the future, VapeClubMy aims to grow at a rapid pace and besides providing a subscription service, they may want to branch into other things.

Co-founder Ken Foo said, “We are looking to expand our reach beyond the borders of Malaysia. As Malaysian e-liquids are pretty popular overseas, we would like to reach out to consumers outside of Malaysia who are finding it difficult to purchase Malaysian e-liquids. This can also provide international mileage to all our partners who come on board with us.”

Seeing as I am not a vaper myself, I reached out to a vaper to probe his thoughts on the availability of such a service. According to Rajevan Anbalaghan, an events innovator, personally he has yet to find his favourite taste and he normally switches between vape flavours. Therefore he sees the potential with VapeClubMy and thinks that the idea of the startup is an interesting one.

Vulcan Post concluded the interview by asking what the founders’ thoughts were on the culture of vaping, Jeremy said that with anything that is considered a vice, he thinks each individual has the right to his/her lifestyle choices. “As far as we know, vaping is a better alternative to smoking and many smokers have managed to wean themselves off smoking, through vaping.”

Vaping may not be a preference for all, but there are users who choose it over smoking. This can be attributed to the ability to customise not just the style of mod, but the flavour as well—which is very different from smoking cigarettes because preferences might be only influenced by brands. Users are always on the lookout for their favourite flavour of choice and what sets an online subscription service like VapeClubMy apart from the ordinary retail store, is the avenue to seek out their desired preference through the flavour preference survey.