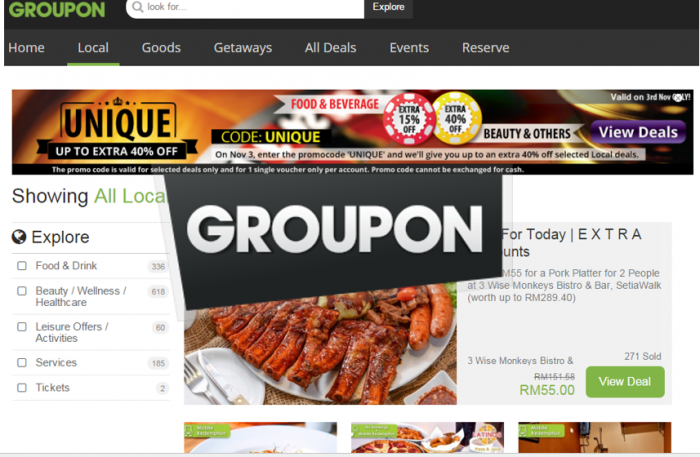 If you’re an avid discount lover—Who isn’t?—then chances are that at one point, you would have utilised Groupon to search up deals for anything and everything under the sun. It is the one-stop location where all deals are grouped together, be it for food, activities or even for a spa treat.

The previous web interface for Groupon was a predominantly green site, but now if you were to head on over to Groupon’s Malaysian site, you would see a cleaner site that is sporting a white background.

Founded back in January 2011 by Joel Neoh, this is the first major facelift that Groupon Malaysia has received since its launch. The update lends a sophisticated feel to the website and now it looks like a true online marketplace, stepping away from its previous daily deal website appeal. The recent update is applicable for both the Groupon app and website.

However it isn’t just all about the looks for Groupon’s Singaporean and Malaysian update, there is also the inclusion of a new search, browse and location feature, and the mobile app also has an enhanced search and “Nearby” feature as well.

“We’ve added thousands of new deals in the last year alone in Singapore and Malaysia, two important markets in the region,” said Kelvin Teo, Managing Director of the Groupon APAC Tiger Region, “Delivering a true marketplace website, along with new mobile apps, allows customers to quickly search these deals and find exactly what they’re looking for.”

Updates for the website includes easier deal discovery whereby customers can easily scroll through endless deals, as well as receiving enhanced notification for timely alerts to relevant deals. Another website feature is a search box which is conveniently positioned at the top of the screen and every search result comes with a set of easy-to-use filters so users can get directly to what they are searching for.

As for the app, the updates include a ‘nearby’ function which is a tab in the mobile app. This enables users to see what Groupon deals are closest to them. The other app update is ‘search’ which allows users a quick access to Groupon deals.

More updates will be in store for Groupon during the remainder of the year, including further website and app enhancements. For now, it is just interesting to look at the stark difference between the previous Groupon site and the one users are able to use now.

From font to colours, the update gives a fresh appeal to the Groupon site and app as it transitions from being a mere daily deals portal to a sophisticated looking online marketplace.