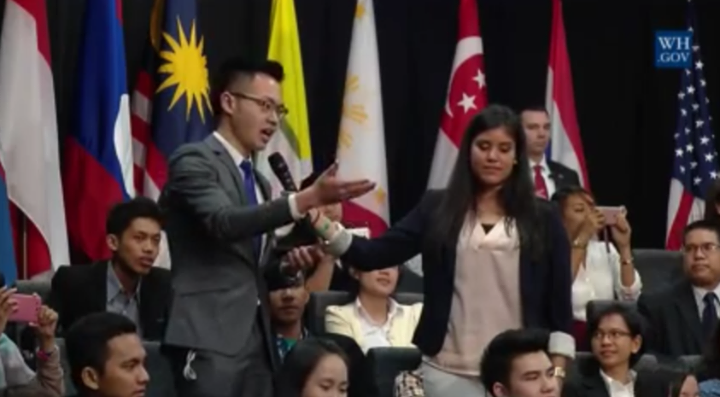 President Barack Obama is currently in Malaysia for a three-day visit due to the 27th annual Association of Southeast Asian Nations (ASEAN) meeting followed by the East Asia Summit. We all know he’s here thanks to massive traffic jams and signs such as this:

(Note: Does anyone know the original photographer of this photo? Do let us know so that we can properly credit him/her.)

Obama then headed to Taylor’s University lakeside campus for a town hall meeting with the Asean Youth where youths brought up pressing matters or questions to him, but one young man named Alphaeus Tan stood out from the crowd with his personal appeal to Obama.

His question and request to Obama has gone viral on social media with many people offering to “give him a cookie” (if you are familiar with memes, you’d understand what this means), while many confused others who did not watch the live stream video of the town hall meeting asked curiously what on earth did Alphaeus say to Obama.

So what did he say to earn all those cookies? Here’s a transcription of his request:

Talking about democracy and freedom of speech, Malaysia is currently embroiled in a political scandal and its frail justice system can bring no rights. Therefore, as thankful as I am for this, I would like to take this opportunity to ask you for your assistance in raising this issue to the Prime Minister of Malaysia and encourage transparency and independence of operations [at this point the audience starts applauding] of the Malaysian Anti-Corruption Commission, Public Accounts Committee, Bank Negara, and all media organisations. So, thank you.

Obama replied after a little pause, “I will do it.” He also added, “Now I admit that I was gonna do it anyway, but now that I hear it from you, I’m definitely going to do it.”

Obama then went on to explain about the position and role of the United States as a large country with a lot of influence, and sometimes people do not want them to meddle in their internal affairs. He was also fair to say that even at times his own country have their problems and he did not want to tell others what to do.

However, there are basic values to practice and one of it was that a country works best when everyone has a voice that should be respected. To listen to his full reply, you can watch the video at the end of this article.

Since his, according to some, heroic deed, jokes have been made about his safety. But jokes aside, netizens applauded him for his bravery for bringing up a concern that is close to the hearts of many Malaysians.

To listen to the full exchange between Alphaeus Tan and Barack Obama (which includes Obama complimenting his cool name), watch the video below (or the full YouTube video):

Also, did you catch this guy in the middle saying hi?