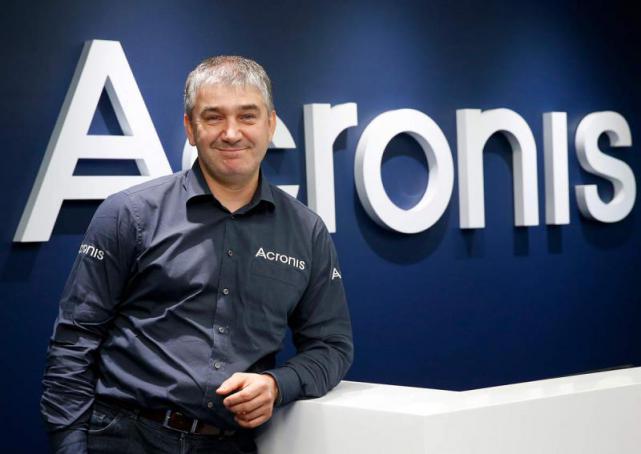 If there’s one technology company that has been overlooked by most in the startup scene, it would arguably be Acronis. For those unfamiliar with the name, it might possibly be because you are not using any data backup or file syncing and sharing service. If you are, then you are probably using some of the more popular service providers such as iCloud, Dropbox or Google Drive.

But Acronis is so much more than that, and most importantly, the Singapore-based company is a technology giant which only recently started to ramp up its PR efforts in Singapore and beyond.

“Acronis is the easiest way for you to back up your data securely. Many of our users are also using Acronis to sync and share their files across multiple devices,” shared CEO Serguei Beloussov when we met at their office at Suntec City.

With an unmistakable Russian accent, Singaporean national Serguei was multitasking — replying to emails while sharing with us the story of Acronis and how it grew to serve over 300,000 businesses and five million consumers around the world.

While Acronis has seen its fair share of success — it currently has 700 employees and counts even the Pentagon as its loyal client — it wasn’t all smooth sailing for the company.

“The ride with Acronis is the same as an explorer — where “difficult” is a normal state. It’s the same as a Mount Everest climber — although he has climbed many other mountains already, conquering the Everest peak will always remain difficult to him,” Serguei told Vulcan Post.

Prior to retuning to Acronis and taking it to where it is now, Serguei was leading Parallels, which Acronis was initially a business unit of. However, Acronis was spun off as a separate entity in 2003. Parallels is a global player in hosting and cloud service enablement and desktop virtualisation, and Serguei was central to its growth. Today, it makes several hundred million dollars in revenue, and its cloud service offerings are used by 50 million customers.

It is no wonder then that Serguei shared that his default entrepreneurial journey is “difficult”, since his decisions impact millions of customers worldwide.

“The world is rapidly changing. If you have a typical day then tech business is not for you. I don’t believe you can arrange your time in a predictable manner; depending on health, work, and family, you need to make decisions quickly — so you really need to be responsive, decisive and hardworking to be at the top of your game,” Serguei told Vulcan Post.

Everyday, Serguei’s involved in making sure that the Acronis suite of products is constantly improving in terms of speed and affordability.

“Think of great brands around the world, such as Boeing — every new version they introduce is faster, better and more affordable. That’s what my focus is — to make our products better for our customers.”

Before we ended the interview, we asked Serguei what he would work on if he wasn’t working on Acronis, and his response took us by surprise.

“We are not even close to where we want Acronis now. We want to grow Acronis a thousand times bigger than it is now. And the future is in data backup solutions. It’s the same as flu shots — some might argue that you don’t really need it, you know you have to take it. For data back up and disaster recovery, there’s no escaping it — we are living in a digital world now.”

“I couldn’t imagine doing anything else.”