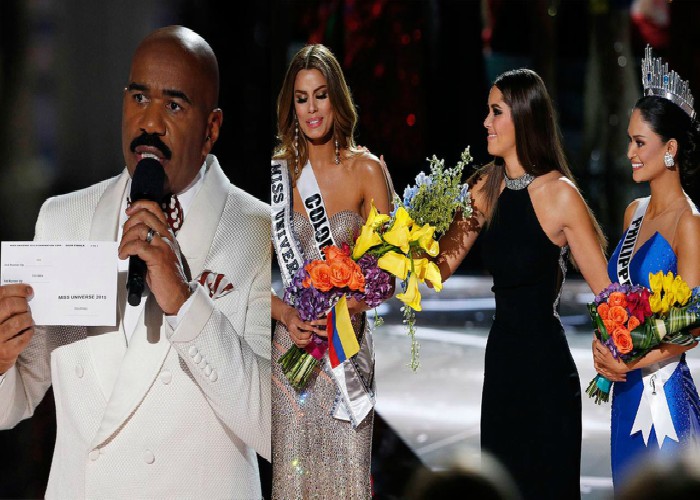 Two beautiful women stood facing each other, beaming in their pearly whites as they anticipated the results to a competition that would drastically alter their lives forever. It was after all the glitzy glamorous occasion of Miss Universe 2015, and either one of the them would’ve been crowned the victor of the 64th edition of the pageant.

As the host for the evening, Steve Harvey addressed the crowd with the Miss Universe results, the women exchanged hugs and held each other’s hands tight, the emotions and excitement clearly evident across their faces.

Miss Columbia, Ariadna Gutiérrez was announced the winner of the title, but the only thing that didn’t fit the entire picture was that she was mistakenly crowned. It turned out that Miss Philippines, Pia Wurtzbach was the actual bearer of the Miss Universe position. Upon learning about his disastrous mistake, Steve could be seen pacing the stage, holding the result card in his hand, his mind clearly on overdrive.

Mistakes happen all the time and it certainly does not only happen on the podium of one of the most watched television competition series in the world. Entrepreneurs are also prone to be in such situations and the ones who would be affected in return, are their loyal customers and clients, and everyone who has invested in the business.

As such, here are 5 key lessons that every entrepreneur can learn from Steve’s unfortunate mishap.

1. Sorry Is Often The Easiest Word

It takes a courageous soul to own up to one’s mistake and to apologise for it. Every entrepreneur would be familiar with the wrong choices and mishaps that might’ve happened throughout the course of their business.

One thing that they can learn from Steve Harvey’s unfortunate mistake is to say sorry. After announcing the wrong winner, Steve did not walk away from the stage. Instead, he owned up to it with a “Okay folks, I have to apologise”.

His apology did not safeguard him from the insults and disses (Memes, anyone?) that would soon follow. However, it also earned him some form of respect from the netizens. Similarly, in the business world, respect is earned by having the courage to apologise, it is the first step towards ‘fixing’ or undoing a mistake, no matter how big or small it may be.

2. Never Delay Or Prolong A Mistake.

Steve maintained his composure even with a massive crowd on stage and off. He handled the crowd despite the endless cheering, by pressing on to announce the right winner. In moments where he could have been easily overwhelmed, the host for the pageant did what was right by not delaying the mistake and promptly announcing the rightful winner of the competition.

In the world of business, delaying a mistake is a total no-no. Time is of the essence and by quickly owning up to a mistake, there might be better a chance to rectify it before it’s out in the open. For instance, in cases where promo codes on websites unfortunately do not work due to some glitches, it can be swiftly rectified prior to the consumption of the masses.

3. Be As Transparent As You Can Be

Upon rectifying the mistake, Steve proceeded to be as transparent as he possibly could, to all who were watching the pageant, on where exactly he went wrong and why. He said, “Listen folks, let me just take control of this. This is exactly what’s on the (results) card, I will take responsibility for this. It was my mistake, horrible mistake but the right thing is I can show you here (on the card).”

Steve pointed out exactly where he went wrong and that is something entrepreneurs can learn when they have made a mistake. For an entrepreneur, admitting to the exact flaw is indeed no easy feat, but if clients and customers can find out where exactly things went wrong, it would be better understanding for both parties, and ultimately that is where resolve can occur.

Also Read
Ringgits Wasted And 6 Months Later, This Startup Died Before It Even Began

4. Take Full Responsibility For The Mistake

Steve was as gracious as he could be throughout the entire situation. “Please don’t hold it against the ladies,” he urged the crowd at the event, and also indirectly to the whole host of netizens who would be able to watch the unfortunate moment online.

For instance, when an employee makes a mistake, the entire company should be able to take full responsibility over the matter and apologise as a whole entity, instead of allowing just the employee to take the full brunt of the responsibility. It often takes an entire army to tackle a situation, and not just a soldier.

5.  At The End Of The Day, Be Gracious About The Situation

Memes surfaced everywhere following the Miss Universe blunder and Steve took it all in his stride when he posted a picture on Twitter over the Christmas season. He playfully captioned his picture, “Merry Easter y’all” along with emoticons of the Christmas tree. Steve did not take the insults to heart because he probably knows that he handled it the best that he can.

In terms of being an entrepreneur, hiccups may happen along the way that may cause a bump in the road but as long as the team is willing to drive over the bump together, they will make it across. Perhaps not unscathed and unhurt but at the end of the day, being gracious about a mistake will allow a business to overcome that stumbling block, and that is the next best step towards recovering from any unfortunate incident. One day, you might be able to even laugh about it.