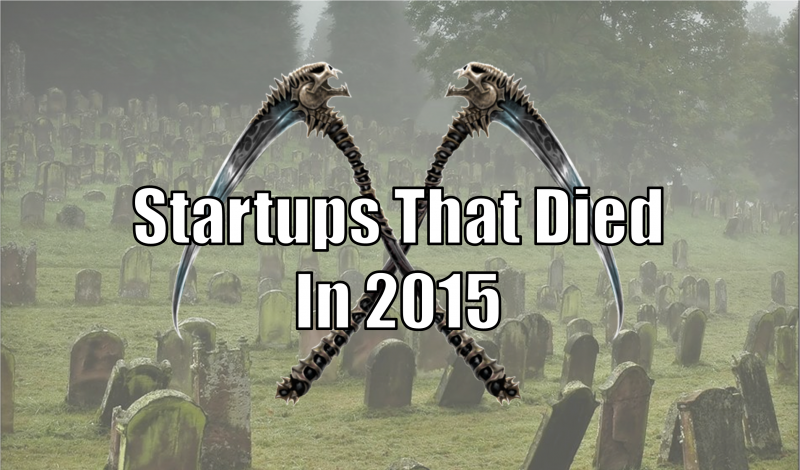 Failure is a commonly discussed theme within the startup ecosystem, and it’s a known fact that a majority of startups never make it to the finish line. Many of them just fold by the way side and die silent deaths.

While the fear of failure is a very real thing, many “new-age” startup founders these days subscribe to the “Fail Fast, Fail Often” mantra that’s often professed by the gurus of Silicon Valley. They insist that sticking to this mantra enables them to quickly test a particular market, fail fast, and it helps them learn valuable insights that they can use to return stronger and wiser. The validity of this idea however, is debatable and there numerous schools of thought dedicated to it.

Whether intentionally or unintentionally, startups fail and here’s a list of 5 of them that failed to make it to green pastures this year. And while this article has no intention of shining the “spotlight of humiliation” upon them, perhaps we can take a look at what initiatives have failed so that startup founders can either improve them, or avoid these altogether.

VidPays was a mobile platform that was set up with the aim of getting more people to watch video ads by incentivising them with financial rewards. They officially launched their platform around the middle of the year but they failed to gain the critical mass that was necessary to sustain their operations.

The team updated their Facebook page last in October with a blog post called ‘Anchor Dropped’, where the founder took the time to explain why they think they failed. I guess most people just wouldn’t watch video ads, even if you paid them to.

Also Read
Ringgits Wasted And 6 Months Later, This Startup Died Before It Even Began

Boxed Up Chef was a service that wanted to ease the lives of working adults and make them even healthier, by delivering fresh pre-portioned ingredients along with step-by-step instructions that they could use to cook up a meal.

In an Instagram comment about 19 weeks ago, Boxed Up Chef said they wouldn’t be coming out with any new recipes as they are pivoting their business, and they even “temporarily” took down their website. Their Facebook page, however, shows that they are permanently closed.

The only difference between The Lean Canteen and Boxed Up Chef is that this service does the cooking for you and delivers healthy meals to those who lead busy lives. In order to provide a healthy meal option to their customers, this startup insisted on working closely with a nutritionist and a qualified chef to ensure that their meals average around 500 calories.

Albeit the good intention, the startup has been inactive on Instagram for the past 23 weeks, and they didn’t respond to a query on Facebook about whether they are permanently closed. They probably are (I tried calling them too just to be sure, as expected, no response).

Shoptizen was a digital platform that wanted to turn all its users into brand ambassadors. Users on the platform could take pictures of their purchases, share them and tag brands that were in the picture, and if they triggered a sale they’d get rewarded. This concept would’ve created a social buzz for brands that they could’ve in turn used to sell more products.

After speaking to a representative from the startup, I learnt that they closed down all business operations for Shoptizen but they’re working on another similar idea.

Delicious Detox Delivery was another food-based startup that offered detox meal plans that are made from raw, vegan and organic foods. Interested customers could opt for meal plans such as the 5-Day Lunch Detox, 7-Day Detox menu (RM650), among others. The startup also offered tailor made catering services and would also conduct customised corporate services.

While their website is still functional, they aren’t accepting any orders as they’re currently closed for restructuring, and they last updated their Facebook Page in June.

Now I understand that this list isn’t that comprehensive as it doesn’t include the other numerous startups that didn’t survive this year. The fact is that many startups launch and then die without the masses knowing. If you do however know of other startups that didn’t make it, feel free to leave a comment below or on the Facebook page. It  is, after all, about learning what has been tried and tested.