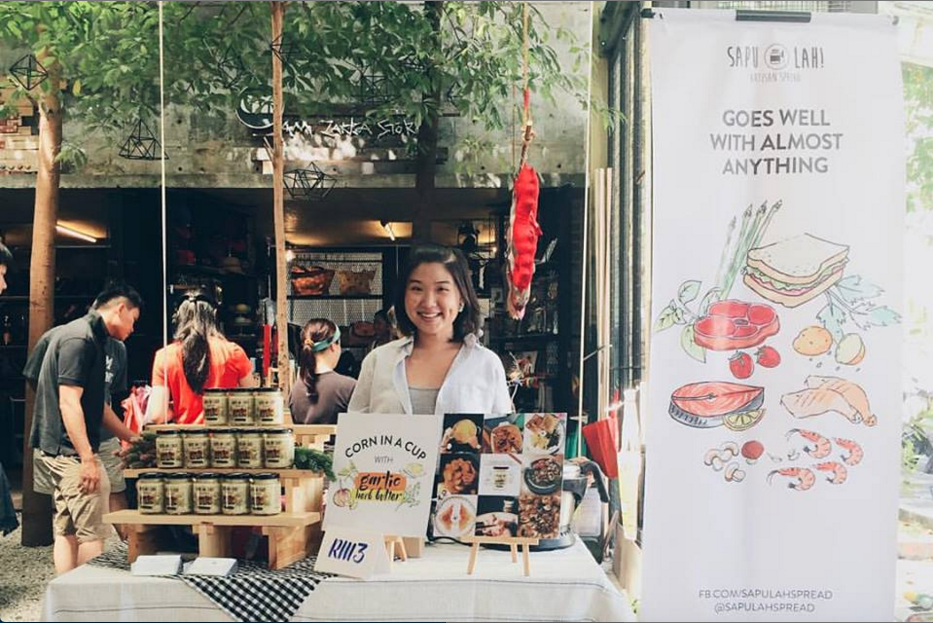 Who would have thought that the idea and inspiration for a jar of delicious savoury spread would have come from the rustic outdoors of a camping trip? However, that was exactly how the light bulb went off for the inception of Sapu-lah, an artisan spread made by two young Malaysians.

Friends Amelia Sia and Xinyi Lee, who eventually went onto to become business partners, always adored the outdoors and more often than not, they found themselves lugging around plenty of items with them. As such, since they were on the lookout for an oil and seasoning replacement to be used for cooking and barbecue sessions, they thought why not make one of their own?

A garlic and herb butter spread would have been an ideal replacement, with the added benefit of being lightweight as well. What was just a simple jar of delicious goodness soon turned itself into a business plan. Once the pair realised that they had friends who made artisanal sambals and jams as well, they figured that this could indeed be turned into something else that they could work together on.

Amelia spoke to Vulcan Post about what Sapu-lah was all about and she said, “We make spreads that can be used for cooking or ready-to-eat just like that.” It can also be paired with pastries, meat and vegetable, and their product contains no preservatives, food colouring or any artificial flavours. “They are all made from fresh, natural ingredients,” Amelia said.

It certainly is a whole lot of work for the pair to create the spread from scratch as Amelia is a motion graphic artist and Xinyi is both a designer and an account executive; however, they both lack the expertise of a chef.

When Vulcan Post pointed this out, Amelia grinned saying, “But we love eating.” It’s true that creating a flavoured spread that can suit Malaysian’s taste buds, is no easy feat, but the foodies put in a little extra elbow grease in order to make things work.

A Recipe For Success

The pair runs the entire business by themselves, and this involves everything from creating and trying recipes, to making the spread itself. Then, there’s also the more creative aspect of the business which they definitely thrive in, seeing since they both come from a design-based background.

Amelia said, “We designed our own labels, packaging and social media stuff. People like looking at fresh new things and we try not to make it look super homemade. It can be homemade but the design should make it stand out. A premium but artsy look is what we’re going for.”

With their background, they are able to make the business work to their own advantage. “Xinyi’s very good at managing our business together because she’s an account executive,” the 25-year-old motion graphic artist told Vulcan Post.

Taking One Step At A Time

When asked then if they would love to turn the idea into a full-time job one day, Amelia said, “We are not ‘terrer’ enough to handle it, just the both of us, but we learn new things every day! That is one of our goals.”

Thus far, Malaysians have been receptive towards the brand which is sold both online through Sapu-lah’s social media platforms, as well as offline, through the Red Cherry Store at Pop, by Jaya One. Customers have even gone as far as making their own personalised versions of recipes with the humble Sapu-lah spread. Amongst the more creative meal creations, Amelia noted, were the pancakes, pasta and egg recipes, which utilises the garlic herb and butter spread in one way or another.

With this success, the pair is setting their horizons further as they are currently trying out some new recipes that they created, and they even have plans for smaller jars in the near future, which can be used as door gifts and wedding favours. “We want to create flavours that we both enjoy eating and is good enough for our current and future customers,” Amelia said.

Spreading Goodness All Around

Being young entrepreneurs—Amelia is only 25 and Xinyi is 24—it has been a rewarding adventure for the both of them. They were even recently nominated for the DIGIwwwow competition, and although they did not win, they made it to the top 5, and created some new friends along the way.

With Sapu-lah, they find it rewarding when they have pop-up booths at markets or events, and they get a chance to communicate with their customers directly to get their feedback. “They’re all very positive and motivating. It’s tiring but we both enjoy it a lot!” Amelia said.

The feedback has been positive and motivating, and to think that it all came from just one humble jar of artisanal spread. Speaking about her feeling of excitement, especially when the pair receives emails and comments from their customers, Amelia described, “It feels amazing! It’s definitely motivating us to grow Sapu-lah, like when customers repeat their orders, or share their recipes with us via social media.”

The little things such as shared recipes of garlic and herb fried rice, egg rolls and pancakes keeps the pair going and reaching for greater heights with their business, and by the looks of it, it would be one that is aimed to spread joy and flavour amongst all Malaysians alike.