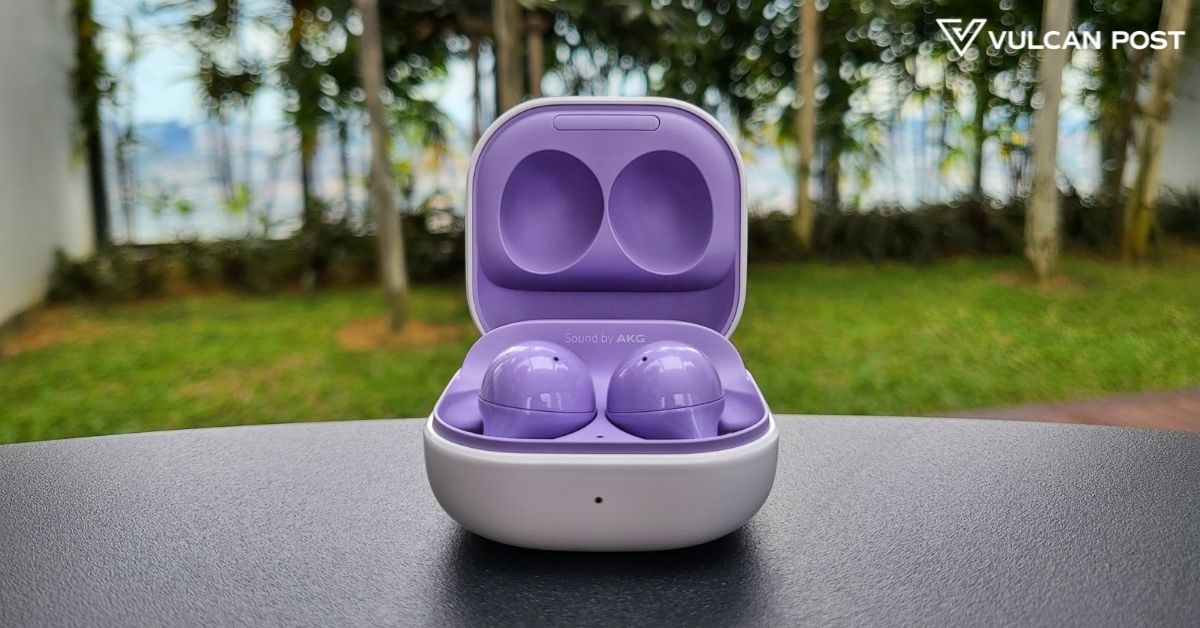 Samsung has released its smallest and lightest true wireless earbuds yet, which were revealed during the launch of its new foldable phones. The Galaxy Buds2 weigh just 5g each and when worn in the ears can be barely noticeable, though this wasn’t applicable to my small ears.

I’d never been a fan of in-ear earbuds as I found them uncomfortable, but I am slowly coming around to accept them. Plus, I’ve had decent to good experiences with previous models from other brands too. So, I was more than happy to give the Buds2 a spin.

The pretty lavender set of Buds2 that I received came in its case that’s similar in shape and size to the Buds Pro and Buds Live. Its jewellery box style case nicely fits in my pockets and supports wireless charging, with an LED to display its battery status on the front.

With enough practice, opening and closing it with one hand is possible and I liked that the case closes with a nice “thunk” instead of the usual plasticky sounding “clicks” from other earbuds I’ve tried.

While the glossy white case on the outside looked rather cheap to me, its matte interior was more premium looking and matches the colour of Buds2 you choose, whether in white, graphite (dark grey), olive, or lavender.

The Buds2 has a similar bulb shape to the Buds Pro, but with a glossy finish which made it quite slippery and prone to falling out of my fingers. But hey, I’m generally a clumsy person in the first place, so it may be a personal shortcoming.

To ensure it stayed secure in my ears, I switched out the silicone ear tips for the smallest size offered. I wasn’t given much choice here though, because Samsung doesn’t provide as many ear tip sizes as brands like Sudio do, for example, and even the smallest size wasn’t that much of a difference from the default ones attached.

I still felt like the Buds2 weren’t sitting deep or securely enough in my ear canals, but I was able to test their fit through the Galaxy Wearables app. After a few adjustments, it assured me that I was wearing them just fine.

Because I’m already using a Samsung phone, pairing the Buds2 was seamless, and the app was where I got to learn more about the earbuds’ touch controls which are as follows:

One pro for me about the Buds2’s touch controls is that they give off a soft beep that tells me I’ve touched them and that they have registered my intended control, just like the Buds+ does.

Via Galaxy Wearables, I could also update the earbuds, switch between different EQs (equalisations) for my music, find my earbuds, and view the Buds2’s battery status.

Samsung claims that the Buds2 will run for up to 5 hours of continuous playback with ANC enabled. When paired with breaks inside its charging case, this number goes up to 20 hours. Turning off noise cancellation will extend it to 7.5 hours, or 29 hours including the case.

I can say that since receiving the Buds2 at full battery about 2 weeks ago, I’ve been casually using them quite consistently and have yet to charge the case.

To get the best sound quality from the Buds2, I found that I had to push the earbuds quite deep into my ears, which was less comfortable due to the larger silicone tip sizes.

But once I had them in securely, I could jump around and jerk my head from side to side without them falling out.

So far, I’ve reviewed the Jabra Elite 3 and Sudio Nio wireless earphones, and in terms of sound, I would say that the Buds2 sit in second place.

They can’t beat the Elite 3, but they’re slightly more well balanced than the Sudio Nio and have better ANC abilities. However, the Buds2 sound a little too soft for my liking.

I can’t quite put my finger on it, but the way I can describe it is that they sound slightly far away, like the music is emerging from a different room.

Pushing them further into my ears, while uncomfortable, would fix this issue. I also found that the best way for my music to sound clearer and punchier was by setting the EQ to Dynamic on the app.

I don’t demand much from my earbuds really; as long as they sound clear and well balanced for my pop and musical theatre genres, it’s usually enough for me, and the Buds2 satisfied this.

Noise cancellation on the Buds2 was pretty great. While I’m not someone who particularly likes ANC as I like being aware of my surroundings, it did help drown out the drilling and construction coming from my neighbours.

It does seem a little odd to me that the brand didn’t include an auto-pause but chose an auto-disabling function for ANC instead. Perhaps Samsung has different ideas for how wireless earbuds can be innovated.

The Buds2 produce some decent sounding audio with an aesthetically pleasing design. If there was something off to point out, it would be the ambient sounds produced by the Buds2 which sounded awfully artificial, so I was happy to settle with just turning ANC off completely.

Receiving calls on the earbuds gave me a convenient hands-free experience as well, where my caller sounded clear to me, and they reported the same on their end.

Its battery life of 5 hours continuous playtime with ANC enabled would get most people through the more productive hours of the day as well, which is great for a reliable pair of earbuds priced at RM499.

However, I personally wouldn’t be reaching for the pair as my default earbuds because of the discomfort I faced with them. Wearing them too tightly in my ears for more than an hour would cause a dull ache that I just can’t seem to shake. If worn any looser, my music would sound “tinny” and distant.

Of course, this is just personal preference, as the few other people I’ve asked to test out for me have reported no issues with the ear tips’ fit.