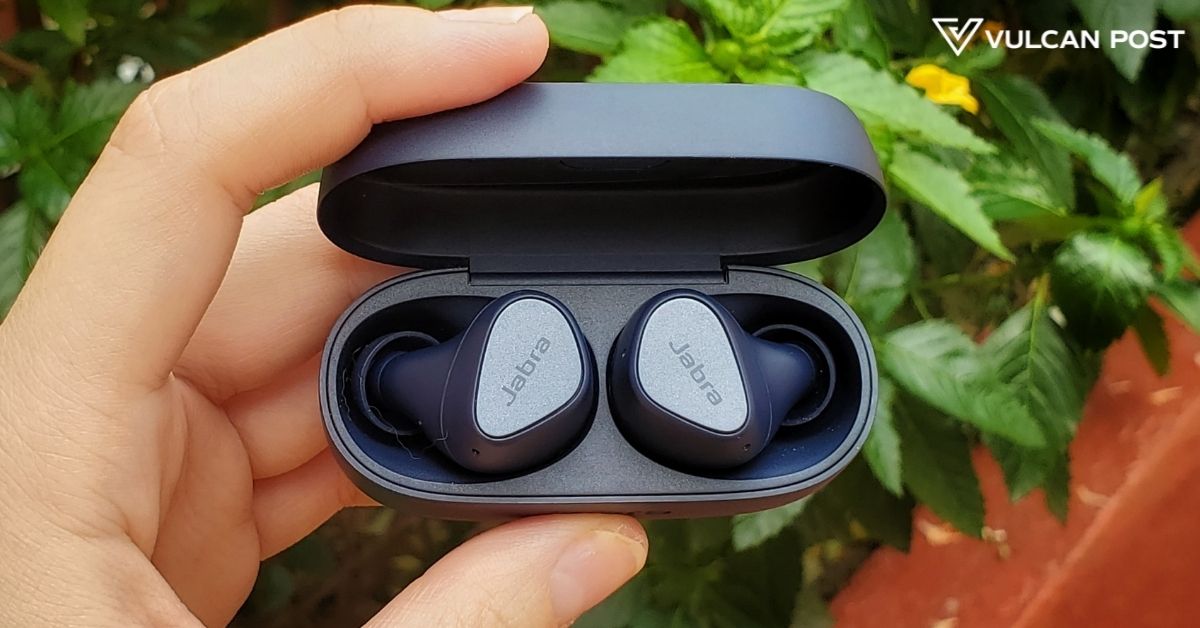 My colleagues have previously reviewed the brand’s more premium Elite 75t and Elite 85t earbuds. Both were impressive, with the Elite 75t even converting one of my colleagues into a full-time wireless earphones wearer. She’s never looked back since.

To add, both of them were never personal fans of wireless earbuds as they felt uncomfortable with the silicone ear tips in their ear canals. It’s something I actually agreed with, with the addition of how they could never stay in my ears securely, hence my appreciation for Sudio Elva’s neckband earbuds instead.

So, when I received a review unit for the Jabra Elite 3, my first thought was, “They’re probably gonna keep falling out of my ears”.

Spoiler alert: I’m happy to say that I was wrong.

Receiving a Navy pair, the box came with 3 different EarGels (earbud tips), a USB-C charging cable, along with a safety information and warnings booklet. Just like its predecessors, no instructions booklet was included and you’ll have to find it on Jabra’s Sound+ app.

The charging case looks similar to the other models, but this time a little shorter and more pill-shaped.

I was pretty delighted to find that the earbuds came with physical buttons as opposed to touch functions, so that repositioning the buds and fixing my hair wouldn’t accidentally pause my shows.

And because the Elite 3 earbuds didn’t come with stems like the Sudio Nio I’ve been using, they sat perfectly in my ears without feeling like they were being weighed down.

To get the best fit for my ears, I switched out the pre-mounted EarGels for the smallest size offered which was secure enough for even working out.

In terms of the in-ear comfort, it’s something I’ve never been able to get used to even when using my wired Samsung AKG earphones that came with my phone, so I won’t fault the Elite 3’s wireless nature for this.

My fix has always been to just not wear them for longer than necessary, as I can’t focus on many tasks with music playing anyway.

Charging was no issue at all. I’ve been using the earbuds for 2 weeks now, spending an average of 2 hours/day, 5-6 days/week with it plugged in. So far, I’ve only had to charge the case once.

The LED to display the battery status is sensibly positioned on the front, as opposed to older Jabra earbud cases where it was on the back. There’s no wireless charging, just a USB-C port for wired recharges.

Of course, the earbuds themselves had to be charged more often by placing them in its case, but Jabra claims that it can charge up to 1 hour of use in just 10 minutes, which has been accurate to my own usage.

It requires 2 hours to fully recharge the case, giving the earbuds up to 7 hours of continuous playing time, and 28 hours with breaks inside its charging case.

Pairing them was relatively easy as I had pre-downloaded the Sound+ app. With my phone’s Bluetooth on, it was able to instantly identify the Jabra Elite 3 the moment I took the earbuds out of its case.

Like most wireless devices, the earbuds would automatically connect once it’s turned on when taken out of its case. However, unlike its premium counterparts, the Elite 3 can only connect to one device at a time.

As mentioned earlier, my colleague has been raving about how Jabra has changed her music listening experience. Even with the brand’s less premium model that I had, I can safely say that the Elite 3 met my expectations.

I’m by no means an audiophile. Being a former voice-over and video editor, as long as audio sounded clear and well balanced, it was good enough for me.

Furthermore, my favourite genres are musical theatre and pop (mostly those in the soprano range like Olivia Rodrigo). That should basically give you an indication that what I look for in my music listening experience is clear vocals.

The Sound+ app also allowed me to boost my music presets, though not in as much detail as the equaliser graph offered by the more premium models. In spite of these boosters, I was happy to settle on the Neutral setting as it was already the most well-balanced for me.

Other than that, there’s really not much else to say about the app. You can find your earbuds with it when they’re missing, view the battery percentage of the case, and update the Elite 3.

Unlike the 75t and 85t, there’s no Moments feature with the Elite 3 to personalise your music’s settings depending on your surroundings.

There’s also no auto-pause on the Elite 3 when you remove an earbud, so you’ll just have to press once on the right ear’s button.

The Elite 3 has no active noise cancellation (ANC) either, which is something I appreciate. Before you call me a weirdo, it’s simply because I like being aware of my surroundings at all times, especially when surrounded by people.

These earbuds do, however, drown out sound well enough to require a HearThrough feature that’s toggled by pressing the left earbud’s button once.

The call quality on the earbuds was decent. I was able to hear my caller clearly, and they reported the same on their end.

Some other features carried by the Elite 3 that aren’t exactly of use to me include the Voice Assistant function. Double pressing the left earbud’s button allows you to call up Siri, Alexa, or Google Assistant to make commands on your phone or smart home, which is useful for those who enjoy these shortcuts.

The Elite 3 has won me over in terms of its dependability for clear, well-balanced audio and its physical buttons which don’t accidentally trigger any functions. To add, the long-lasting battery was much appreciated as well because charging my earbuds is something I often neglect.

Its connectivity range was also reliable. I could walk quite a distance away from my phone and still have music playing in my ears, unlike other wireless earbuds I’ve tested that disconnect the moment a door closes.

Priced at RM389 it’s definitely a more affordable option compared to its more premium models that are hovering around the RM1,000 mark. Of course, it sacrifices ANC and multipoint support, but if those aren’t crucial for your experience, then these are worthy earbuds on a budget.