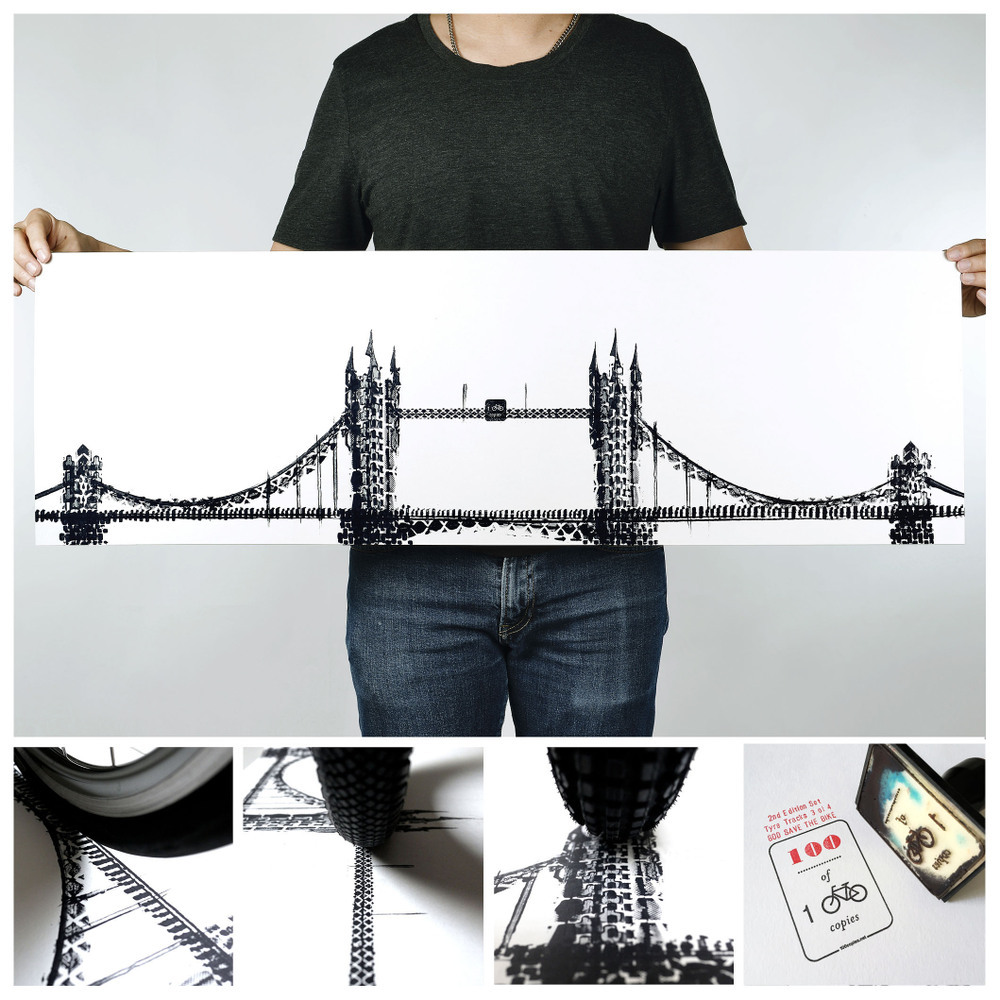 You might not know Thomas Yang, but you would have certainly come across his series of artworks featuring tyre tracks on the likes of Rocketnews24, Designboom and Hypebeast in the recent months. Vulcan Post speaks to the Singaporean artist on his creative inspiration and his limited edition designs, most popular with customers from America and Europe.

1) Hello Thomas, can you tell us more about your background and how you got started in art and design?

I’m a creative director currently working in an advertising agency. I graduated from the Nanyang Academy of Fine Arts in 1992. I have always been obsessively passionate about drawing, design and ideas. After I graduated, I discovered advertising and found that this is where my true calling lies. My biggest break came in 1998 when I won Best New Art Director at the Singapore Creative Circle Awards after which, I went on to bag over 300 regional/ international design and advertising awards at major shows such as D&AD (British Design & Art Direction), The One Show, Cannes, Clio, AdFest and The Spikes for the past 18 years.

2) Congratulations on the impressive number of awards you have won! Which are you most proud of and why?

To me, the British Design & Art Direction (D&AD) is the most prestigious award.  The juries select the finest in design and advertising. A D&AD Award is recognized globally as the ultimate creative accolade, entered and attended by the best from around the world.

Before I started selling online, I needed a name for my brand and I wanted every creation to be limited edition. I googled and a common range was between 50 – 300 copies. I had an idea at that time that I needed two “0”s in the brand in order to fit in a bicycle symbol between them. To create a limited run, I decide on “100”, which led to the formation of www.100copies.net. I could then share my unique creations with other cyclists all around the world who are also looking for cycling-inspired designs.

To reassure my buyers that they own a limited edition product, I list the edition number, the owners’ names and where they come from on the website’s ‘Hall of Fame’, once a particular design is totally sold out. Each piece of work is watermarked, labeled with the title and edition number.

4) Recently, your series of artwork made with tyre tracks went viral. How did you come up with the concept, and what has the response been like?

As an avid cyclist, I was trawling through the web looking for a few cool cycling posters to put up in my apartment. That was when I noticed that there were not many choices available. So with design in my blood, I decided to create a series which revolved around my love for cycling.

Also Read
Meet The Viral Queen Artist Who Is Conquering The Fashion Illustration World With Flowers!

The idea came up while I was toying around with ideas on how I can paint with a bicycle. Tyre tracks were the first thing which came to mind. I went on further to explore the characteristics of each tyre pattern and realised that I could possibly paint some building structures.

With the advantage of being a cyclist myself, each design concept on 100copies is based on different insights coming from cyclists like fixie, BMX, road and mountain bikers. If you have noticed, there’s always a short rationale on each design before you decide to buy a poster or t-shirt. The response has been overwhelmingly positive. I just launched a 2nd Edition available in sets of four, to differentiate from the sold out 1st Edition whereby customers can get to choose their individual landmarks.

5) Can you describe the creation process for the tyre series?

The process was very difficult. I’m not a professional painter with a one hit wonder.  The research process was intensive – I used some of my own bike tyres, neighbours’ bikes and studied all tyre patterns on this website which featured the largest range, and purchased it from them. Each of the landmarks (Empire State, Eiffel Tower, Tower Bridge and Forbidden city) were made with at least 40 trials to provide the best end result for the next 99 copies.

6) Are you looking to launch any upcoming new series, either for the tyre series or a brand new concept?

For now, I’m stopping at four for the tyre tracks series. I have already moved on to my latest design called “CYCLISM” which sold out three days after I had launched it. As a creative artist, I need to be challenged and constantly move on to create new work in order to keep my site constantly fresh!

7) Who or what contributed to your success while pursuing your passion in the arts?

I’m considered lucky as I discovered my passion early on in my career in the advertising arts sector. I was very fortunate to have met a few mentors and talented writers in my line of work. The most credit goes to my wife who has been constantly supportive of my passion for arts.

8) What advice do you have for budding artists who are thinking of going into the industry full-time?

I have two pieces of advice.

Firstly, always keep an open mind to try new things.  Never be afraid of making mistakes. Instead, be terrified of being boring.  Be scared stiff of staying the same.  Opportunities lie everywhere, but most of the time, we just do not have enough guts to pursue them.

Secondly, believe in whatever you are doing, and be passionate about it. Passion is the only drive to constant good work and creativity.