History Repeats Itself. So Does Peter Jackson In “The Hobbit: The Battle Of The Five Armies” 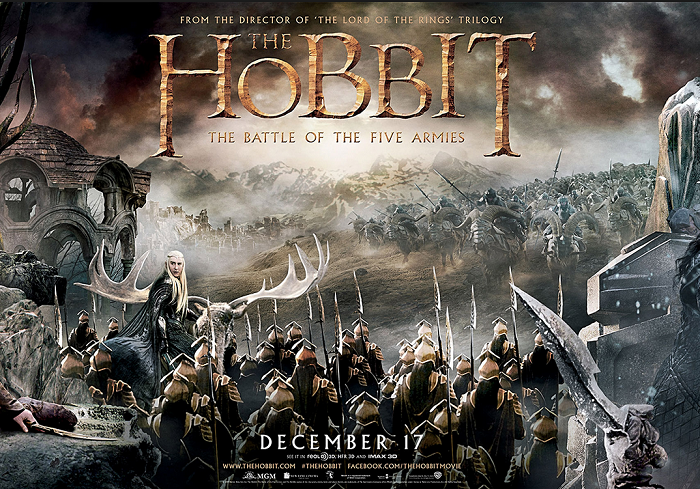 History repeats itself, so does Peter Jackson, but not in a good way.

It has been a disappointing month of December. The movie I was looking forward to, Seth Rogan’s “The Interview” got cancelled because of some rather unusual circumstances. Other than the “The Hobbit: The Battle of Five Armies”, the next best thing to watch is perhaps another installment of “The Night at the Museum”, something I would be very interested in if I was a naive 8-year-old who cared about Ben Stiller movies.

Now do not take me wrongly. I loved the original Lord of the Rings trilogy enough to watch the movies several times over, especially the second and final one. I know some guys go nuts over the whole LOTR thing, learn to speak Elvish, subsequently get beaten because of that and cry over the bromance between Froddo and Sam. Unfortunately, I have reserved my fanboyism for Star Wars and I am a dedicated one at that.

While the second movie of the series “Desolation of Smaug” was what was needed of the series, the material ran a little thin for this final movie. After all the Hobbit is just a single book and creating three movies out of it is like competing for an hour long story telling contest with a Flight Safety Handbook in hand.

However, as people have been complaining that I have been too cynical lately and I do not want villagers with hypothetical pitchforks waiting at my door after writing the review, I will tune down the dial a bit and try my best to be objective.

What Happens In The Hobbit: Battle Of God-Knows-Which-Army?

The dwarves want to return to their mountain to be there like forever. Gandalf is the tourist agent in Middle Earth, coming up with the best route for travellers and revealing which places offer a buffet breakfast.

As per the last movie, the dwarves whose numbers I decided not to count anymore, managed to reach the Lonely Mountain, their original home, after pissing off the rather smug dragon Smaug. Smaug in a case of misdirected anger decides to burn the Laketown while spouting James Bond villain quality monologues.

Unfortunately, Smaug is killed rather quickly in the movie by Bard with a special arrow. Bard is basically the poor man’s version of Aragon from the original series.

Now apparently the dwarves promised gold from the Lonely Mountain to the Laketown people in the past, a promise their leader, Thorin does not want to fulfill. Thorin is struck by something called “Dragon fever”, or something what we call on Earth as ‘selfishness and greed’, and he is unwilling to share his wealth.

Due to this lack of generosity and honour, obviously not learnt by Thorin in his primary school days, 5 armies gather around a single spot to take over the Lonely Mountain, which is obviously not so lonely anymore.

The Dwarves : Small in size but driven by Napoleonic complex, the dwarves have angular shields and helmets designed by Alienware computers, it seems. As a pint-sized man with unrealistic ambitions, I could identify with them a bit, except for when they were riding a hog into battle.

The Elves: The most metrosexual of them all, they spend a lot of time on their make-up before battle and have the most flamboyant wardrobe possible. Their leader, Thranduil, also wants some jewels from the mountain and is so bad ass he rides a moose into battle. Also we have Legolas, who is mighty pissed because the girl elf he likes, Tauriel has abandoned his model-like looks for a half-sized dwarf called Kili, inspiring short men like me everywhere.

The Laketown Humans: An army of insignificant smelly looking fishermen led by our discount Aragon. These were the people who were brilliant enough to build a town completely made of wood a stone’s throw away from a mountain where a fire-breathing dragon lives.

Orc Army One: Regular Orcs led by an one-armed Orc who has issues with Thorin, the leader of the dwarves. Well they are creative as Orcs can be and all sorts of ugly creatures were recruited to join in the attack.

Orc Army Two: Even for Orc standards, this army is weird. These are probably the Orcs who were dropped on the head during their childhood or got hideously disfigured during a game of soccer. There are flying bats along with them, one of which Legolas takes for a ride.

Why should You Watch The Movie?

Well, if your relationship with the series is like a pair of lovers who have been alternating between hot and cold for a while and is in a need of some closure, you should watch this movie because it’s farewell, hopefully, to Middle Earth after this.

You should watch it for the Hobbit, Bilbo Baggins and his uneasy friendship with Thorin who is affected by “Dragon Fever” so deeply that a penicillin shot cannot cure it. The whole incident with Bilbo hiding the Arkenstone and the uneasy tension between them is the highest point of drama in the film (more so than the extreme moments of battle).

If you like spectacular battle sequences and creatures of all kind fighting together for 45 minutes, you should watch it. Yes, given that this is all too familiar but what better to do than watch short people, ugly people, bats, elves, eagles, hogs, and a moose engage in battle.

Why Should You Not Watch The Movie?

If you have better plans during this whole holiday season, spending time with your loved ones and you care less about who takes over the Lonely mountain, then you should just stay away from this movie.

The action scenes seem reused: the sieges, the inspirational speeches before heading out to battle, the rocks being thrown from catapults and Legolas doing a fair amount of acrobatics. You will realise that the directors are stretching this way too thin by turning 4 pages from a book into a 144-minute movie.

The drama never really solidifies, neither does the romance between the tiny dwarf and the pretty attractive Elf lady. Gandalf is hardly there, just around for a few scenes with Sauron to remind us that after this the original LOTR trilogy continues.

Overall, instead of a grand finale, it is more of a reunion party just to show the characters one last time before Peter Jackson takes time off to lose some more weight. Also, those darn eagles always appear at the very last moment instead of when they are most needed.

Someone should give them a seminar on the virtues of punctuality.