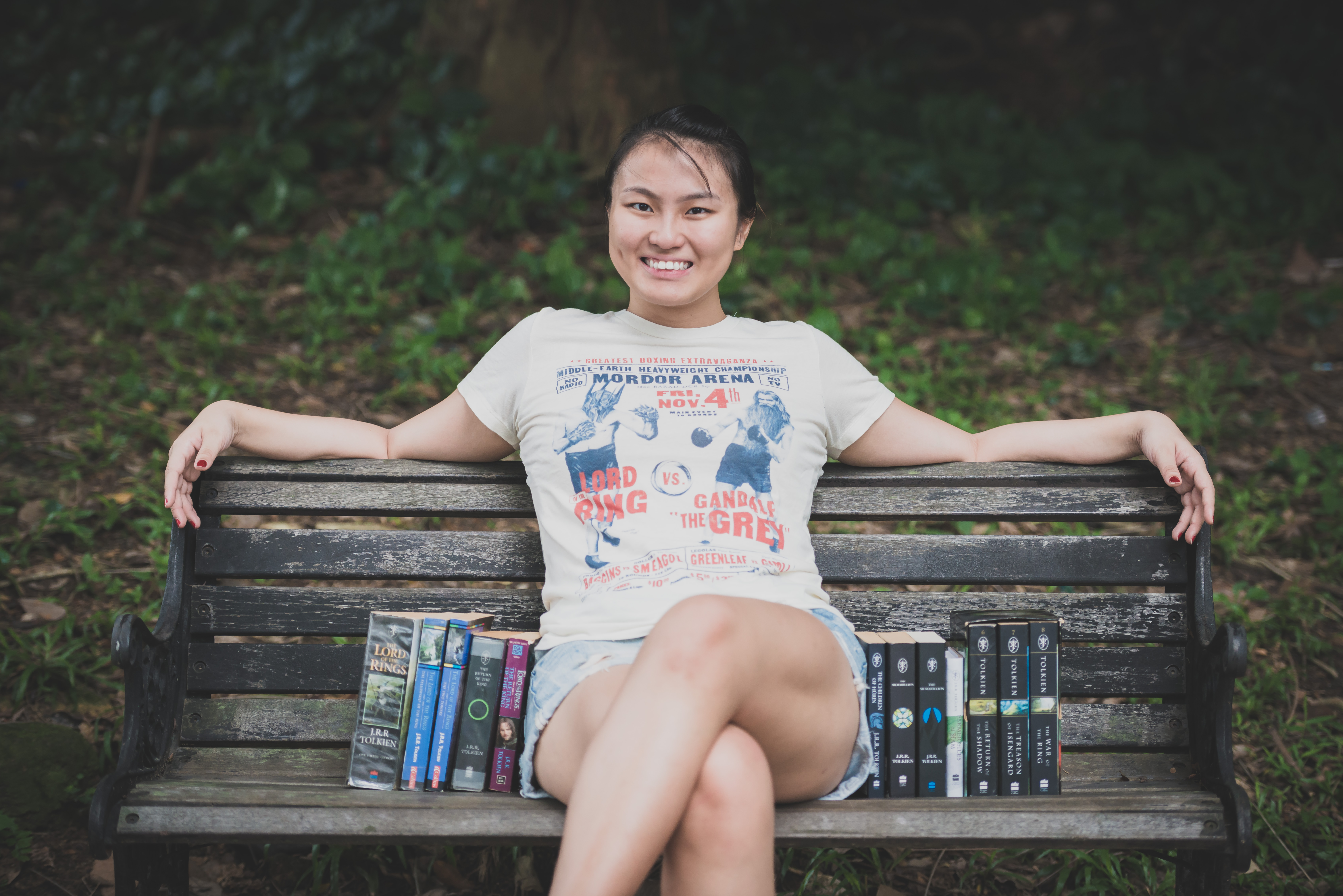 There’s no doubt The Lord of the Rings has garnered millions of fans internationally, but no regular fan out of the pack comes close to diehard fan, Lindsay Chong.

Egged on by a friend in Secondary Three, Lindsay was challenged to prove her devotion by recording down the number of times she watches the Lord of The Rings film trilogy.

She admits, “It’s difficult for me to gauge how many times I’ve watched each movie. I’ve definitely seen The Return of The King the most times; not ’cause it’s my favourite or anything, it’s just that I made it a shortcut on my [Macbook’s] Finder.”

A bit of math had to be done before Lindsay could reveal the closest tentative number she has watched the films because obviously, she didn’t foresee that it would become such an obsession 11 years ago.

So here’s how she calculates: In a year, she has seen each movie 40 times, which makes that a jaw-dropping total of 120 times. Multiply that by 11 years, and she would have watched The Lord of The Rings trilogy 1320 times.

Lindsay, 21, relates her go-to answer for tell-me-something-interesting-about-you-questions — especially at school camps. “Whenever people ask what the one interesting thing about me is, I tell them that I’ve seen Lord of The Rings over 1000 times. Their look of disbelief is hilarious.”

Lindsay has her older brother, Ian, to thank for kick-starting her passion for the film trilogy.

“I think my brother brought The Fellowship of The Ring DVD home… introducing me to the world of Middle-Earth. I only started really getting into it when I was nine though.”

Ian Chong, 30, spills the beans: “[Her room] is messier than Isengard… There are too many [Lord of The Rings] stuff.” He confesses his annoyance when she would hog the television to watch her DVDs, but he is not particularly surprised about her overwhelming interest.

Threatened – by yours truly – Lindsay quotes her favourite line from elf captain Haldir, “The world is indeed full of peril, and in it there are many dark places; but still there is much that is fair, and though in all lands love is now mingled with fear, it grows perhaps the greater.”

In The Two Towers, elf captain, Haldir, says this to the Fellowship as they pass through the Elven dwelling of Lothlórien. Lindsay says, “There’s a great message of hope in this, which is one of the overarching motifs in the novel.”

When re-reading or re-watching the movies, Lindsay claims, “I don’t really look out for anything in particular, since I’ve now moved on to listening to the movies more than watching them.”

Yes, you read that right. Listening. Lindsay treats the dialogue in The Lord of The Rings films as her personalised type of white noise as she studies.

“I like to play them in the background when I study, like how normal people listen to music. It helps me concentrate. Sometimes I notice bits that I’d never noticed before in the past hundred times I’ve seen them, which is what makes every time I play them so enjoyable.”

White noise is typically like the constant frequency of noise that comes with the fuzzy monochrome image on your TV when you flip to a channel with no image feed. White noise can aid in concentration and/or relaxation — to each his own. And to Lindsay, she enjoys a very unique white noise when she’s studying.

Being a dedicated fan like Lindsay would explain her intolerance for ignorant ‘fans’.

“Not all those who wander are lost.”

We’ve all seen this quote somewhere, be it on tote bags, Tumblr posts, tattoos, posters, keychains… Have I named it all? There’s probably more.

Instead of being overjoyed by the popularity of the quote from The Fellowship of The Ring, Lindsay is upset over its senseless publicity. “It irks me that people take this beautiful piece and have no idea that it is from The Lord of the Rings, and therefore written by J.R.R. Tolkien.”

“Over the years I’ve become exceptionally suspicious of people who claim that they “love” The Lord of The Rings or are “fans”. If you can’t tell the difference between Elvish, Dwarvish and Orkish; or if you don’t even know who Fran Walsh or Philippa Boyens is, then you are not a fan,” says Lindsay firmly.

She remained alone, cradling her love for The Lord of The Rings films until 2013, when she “found out that a friend, Syuhada, loves the trilogy as much and as long” as she has herself.

“The joy and relief I felt to have found someone who understood was momentous, to say the least.”

It is almost an understatement to simply call Lindsay a fan, as she appreciates the films for much more than just their storylines. “There are so many proverbial lessons you can find in The Lord of The Rings, and every time I read the books or watch the movie I learn something new, either about the story or about myself.”

Throughout her years of devotion, Lindsay has entered competitions, learnt a bit of Elvish, written her own The Lord of The Rings sequel at the age of 12, read up on the history of Middle-Earth, memorised the inscription on the One Ring, finished The Hobbit and several other of J.R.R. Tolkien’s works, read Tolkien’s biography, and most recently, written a university Literature paper about Tolkien’s work.

Yet, she remains modest at heart. “By no means would I call myself the number one fan, but I can say that The Lord of The Rings is number one to me.”