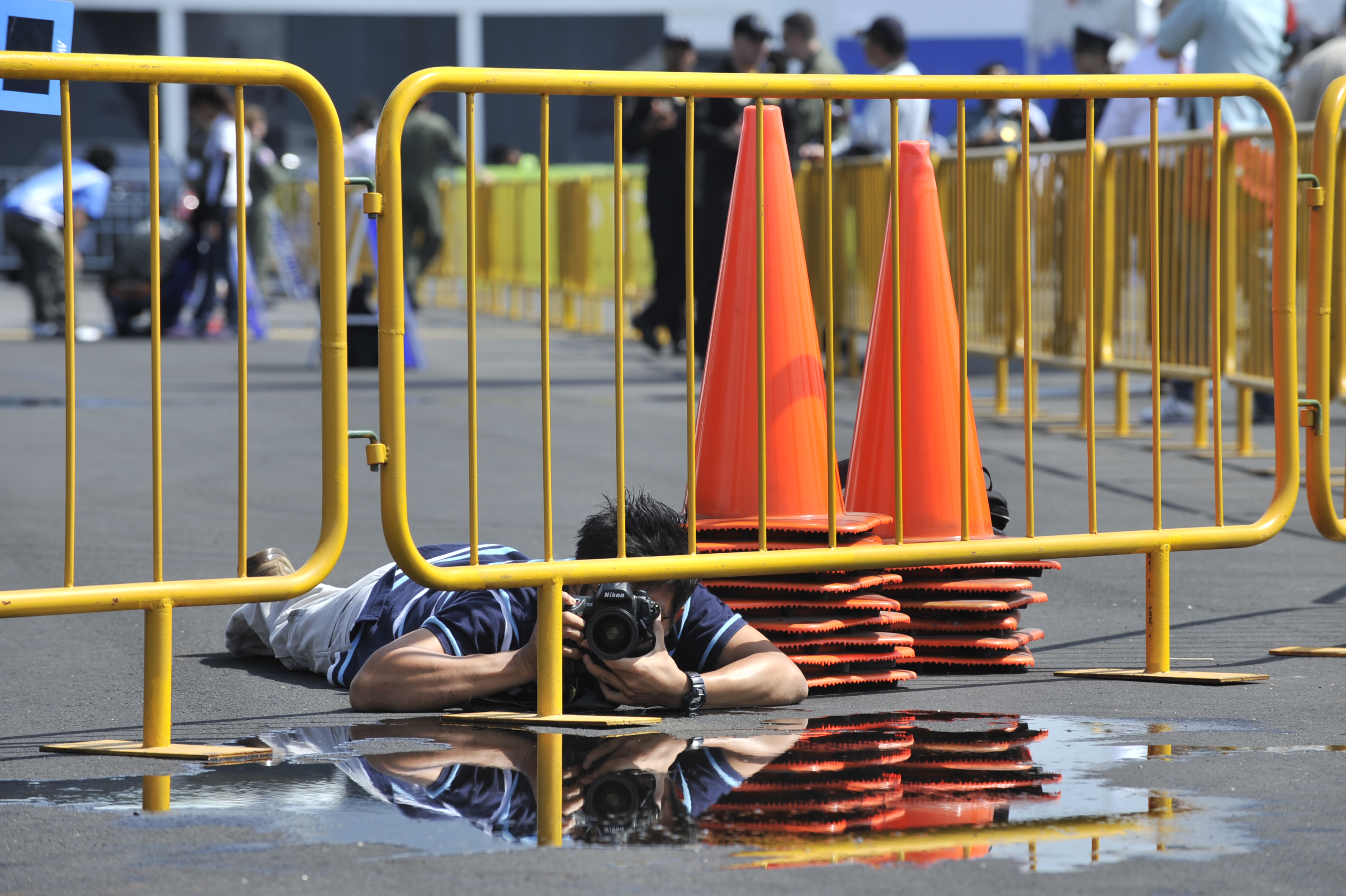 In 2008, Singaporean photographer, Edwin Koo, took a two-year sabbatical, uprooting his family to Kathmandu, Nepal. It was a move that took a lot of guts, leaving behind a job with a steady income, to a foreign place where he knew no one.

Why Nepal, I asked Edwin. He wanted to head to a place where media had lost their freedom, and the decision was made after consulting his university mentor, Shyam Tekwani.

It was during these two years where he found his voice in photography. Effectively jobless, he started photographing anything and everything and developed his own distinct style of visual storytelling. He packaged his photos into serious documentary stories for international media outlets, and his efforts started to pay off.

In 2009, his work on Pakistan won a third placing in the UNICEF Photo of the Year, and later that year, he was also awarded The Getty Images Grant for Editorial Photography.

Sher Zaman, 50, squeezed 10 people into his LPG-powered auto-rickshaw, built to carry 3 passengers, to escape the conflict in Swat valley. More than two million people fled in tractors, cattle trucks, auto-rickshaws, and whatever transport means they could find, as mortar shells pummeled their paradise. 2009/05/20.
Swat Valley was once known as the “Switzerland of the East”, a paradise on earth. But in 2009, it was embroiled in a bloody conflict between the Taliban and the army. In 2010, a terrible flood obliterated everything that Man did not destroy. And in 2012, the teen activist Malala Yusufzai was shot in the head by extremist gunmen. In a land scourged many times over, its people of Swat continue their uphill task to rebuild the paradise lost to both Man and Nature.

In Sangri, Shin, some 2,500 villagers live there with no easy access to education. With the coming of a community school, some 84 students, as old as 14, are getting their first taste of kindergarten education.
A local businessman, Mr Aszadi Khan, has started a Rahman Baba school system – a community-based education program which empowers village communities to have a say in the school’s administration and syllabus. The teachers are monitored by the village council and those who cannot make the mark face dismissal. The system started in villages which have no easy access to meainstream schools in April 2010.
Swat Valley is dotted with hamlets that have been plagued by years of corruption and a feudal societal structure that has created a big disparity between the landlords and the landless. Swat, Pakistan. 2011/06/02.

Upon his return to Singapore, he earned one of Singapore’s most prestigious photography accolade in 2012 – the ICON de Martell Cordon Bleu, which recognises an individual for an outstanding body of work in his photographic career.

The 2011 General Elections also coincided with his return to Singapore. Looking at his homeland through new eyes, Edwin documented the historic event with a fresh perspective that was well-received. His collection of photos can be found on his Instagram account, under the moniker of ‘Singapore Son’.

Chiam See Tong speaks for the last time at Potong Pasir, before heading out to challenge Wong Kan Seng in Bishan-Toa Payoh GRC. The residents of Potong Pasir threw him a grand farewell, accompanying Mr Chiam by marching him from the open field to the town council office.
General Elections 2011. Singapore People’s Party Rally. 2011/05/04.

On the way to Serangoon Stadium, another bus with an important message screams out for attention.
Workers’ Party last rally attracted 30,000 people to the Serangoon Stadium on the last day of the hustings period. General Elections 2011. Day Nine. 2011/05/05.

The Vulcan Post speaks to the award-winning photographer on his journey of self-discovery.

1) How did you get your start as a photographer?

Quite by accident. In university, I specialised in journalism and thought I would become a writer. My interest in photography began in 2001, when I took up a photojournalism module. I still remember that one of the lessons that blew me away was how photographs changed the world. Then in 2002, I photographed the railways of Thailand as my Final Year Project. This book landed me my first job as a staff photojournalist at Streats, a free tabloid sheet. It was probably the best thing that could happen to a fresh grad – a job that paid decently and landed one in adventures (and misadventures)!

2) When you were starting out, did you have any role models or mentors who influenced your style?

My photojournalism lecturer, Shyam Tekwani, played a big role in pushing me towards a photographic career. As a mentor, he inspired me to use photography as a means to tell stories, especially stories that would make a difference to the world we live in. Early in my career, I also had the opportunity to represent Singapore in an international photography workshop in Hanoi, organised by Asia-Europe Foundation and World Press Photo. Among my class, there are some very well-known names today, including Anastasia Taylor-Lind. My mentor was John Stanmeyer, one of the VII agency founders. It was a mind-blowing experience for a young photojournalist – it changed my way of seeing and thinking.

3) You were working for Singapore Press Holdings as a photojournalist for five years. What spurred you to leave your job and uproot yourself and your family to Nepal?

The newsroom was a great training ground. It taught me all the technical skills of photography, but more importantly, how to think on my own two feet. The ability to improvise in adversity, and the ability to see opportunities when there seem none – these are invaluable skills even today.

But at the five-year point, I started to ask myself: Do I want to continue making pictures for other people’s stories? Even though it was very satisfying to see my photos published in the national broadsheet, it wasn’t the real reason why I pursued photojournalism. I wanted to tell my own stories, using my own visual language. In the newsroom, I was limited by the medium and the nature of news. Professionally, it was very sound, but there was no room for personal growth. I had to make a very tough decision between a stable career and my personal pursuit. In the end, I figured that I had to leave my comfort zone, and to rediscover the origin of my relationship with photography.

4) Tell me about your experiences in Nepal. What was it like in contrast to Singapore?

Nepal taught me very important lessons about life, and indirectly, about photography. It is one of the poorest countries in the world. Many things we take for granted here in Singapore – clean drinking water, 24-hour power supply, good roads – are unattainable for most Nepalese. Kathmandu is one of the most polluted cities in the world. Despite such circumstances, people are open, honest, and friendly. What they lack in material wealth, they more than make up for it in the human spirit.

Residents jostled for water as a 6000-litre water tanker arrives to provide water to its thirsty clients. The 6000-litre tank arrives weekly, costs 1270 NPR and is provided “free of charge” by the government. There was no shortage problem 2-3 years back, according to Dilip, one resident. But Kathmandu has become overcrowded in the last three years, he said. Sujata, 10, goes home without a drop in her bucket.

5) How would you say your Nepal stint has changed you in terms of your outlook on life, for better or for worse?

Living in adversity changes one’s perspective of life. Having a hot shower on a cold winter day was a luxury. Having a plate of home cooked nasi lemak is sheer pleasure. Because my wife and I were living mainly off savings, we watched how we spent. We had meat once or twice a week, because it was much more expensive than vegetables. There were not many shopping places in Kathmandu, but our weekends were no less occupied because there was always a celebration or gathering at a friend’s place. Life was far less busy in Nepal, but much more fulfilling, because things that kept us busy were more meaningful.

Friends made up a very important part of life in Nepal. Many of them went out of their way to help me, a stranger in their land. And this became my method of getting to my stories and photographs – by making friends along the way. I never hired a translator or a guide – it would have made the process less natural, more contrived.

6) It’s said that a picture is worth a thousand words. What is the one project you have worked on which speaks to you like no other?

Right now, it has to be this picture from Paradise, my book about Pakistan’s Swat Valley. The project evolved from a documentation of a refugee crisis into a personal search for paradise on earth. In the end, I found these kids in a very remote village called Boyoun. The beauty is unspoilt, untarnished. Whenever I look at this photo, I’m reminded that paradise resides in people’s minds and hearts.

Children play in a stream in Boyoun village, perched more than a thousand feet above the tourist hub of Kalam town. Away from the main thoroughfare, Boyoun is one of the last vestiges of Swat untouched by conflict and modernity, where children still play traditional games like “gulidanda” instead of “Army versus Taliban”. 2013/08/11.

7) What would you say defines your style in the art of story-telling?

I would say there are two words that summarise my style – experiential and personal. I believe that documentary doesn’t need to strive for objectivity. That would be very boring.

A story that is powerful has a voice, an opinion, a way of thinking and a stream of emotions. The author’s emotions should be able to flow to the audience through his photographs. Take for example, my book Paradise. It is a photo book about a place that is unfamiliar and distant from most people’s imagination. It is also a book about my personal journey into Swat Valley between 2009 and 2013. My Pakistani friends who helped me with the story often feature in my photographs. But the narrative that I am weaving is about Man’s eternal search for Paradise. And the people in Swat are my real-life actors, playing out this silent movie made up of photographs. So it is no longer a journalistic report – it becomes a photographic theatre made up of reality.

Because everyone is hard-wired to look for paradise, anyone who views these photographs should connect on a personal level, because there is a strange universalism in the language of photography. That is why sunset and sunrise photographs continue to draw the most “likes” on social media – human beings are hardwired to see beauty, and despite cultural differences, some things are universally beautiful.

8) What advice do you have for budding photographers who wish to pursue their passion for photography full-time?

Be irrational. Be impulsive. But remain dedicated. Surround yourself with like-minded and supportive people, not necessarily photographers, but passionate people who like what they do.