10 Motivational Quotes From Singapore Ministers To Start Your 2015 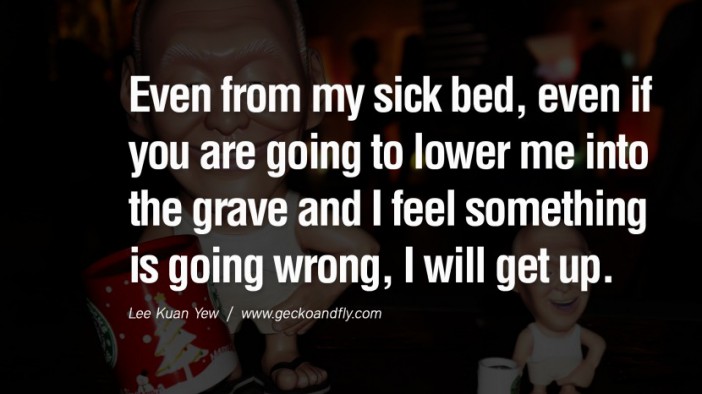 Love them or not, these are the people who have shaped Singapore in one way or another to be the way it is today. Which means that rally speeches and social niceties aside, we believe that they do have some serious advice for those of us looking for motivation to run anything at all, be it our businesses, households, or even our lives.

These are 10 quotes from Singaporean ministers, both past and present, offering us nuggets of advice on life, love, and leadership, and everything else in between.

— Lee Kuan Yew, the first Prime Minister of Singapore and former Minister Mentor of Singapore. At the 1988 National Day Rally, when making the point that he belongs to the exclusive club of founder members of new countries, and is bonded so strongly to the development of Singapore that he cannot disengage himself from Singapore politics. Source: The Straits Times

“I’m very determined. If I decide that something is worth doing, then I’ll put my heart and soul to it. The whole ground can be against me, but if I know it is right, I’ll do it. That’s the business of a leader.”

“We have never allowed the other to feel abandoned and alone in any moment of crisis. Quite the contrary, we have faced all major crises in our lives together, sharing our fears and hopes, and our subsequent grief and exultation. These moments of crisis have bonded us closer together. With the years, the number of special ties which we two have shared have increased.”

— On his relationship with late wife Madam Kwa Geok Choo, meant as advice to his son Lee Hsien Yang, who got married in 1981. Source: Lee’s book  Hard Truths to Keep Singapore Going

Goh: Just as Goh Chok Tong. Who has done his little bit to Singapore, or for Singapore.”

“I was recruited by the former Prime Minister Goh Chok Tong. And I never forgot his key message to me when he was encouraging me to come in. He said: “You must hold fast to your values. If you have to compromise your values in order to join us, you lose your value to us.””

— Vivian Balakrishnan, as recounted during an interview by Elgin Toh of The Straits Times on Aug 3, 2013, that was published on Singapolitics.

“So when I talk about family, it’s not an idle boast. I will tell you quite honestly, I’m a very happy person. I’m very happy not because I’m easily entertained or easily satisfied. I’m very happy because of my family. And we should realise that everything else will pass: your job, politics, position – everything is temporary. The only thing that you are forever, is a son, a brother, a husband, a father, a grandfather.”

— Vivian Balakrishnan, Minister for the Environment and Water Resources. Excerpt of an interview by Elgin Toh of The Straits Times on Aug 3, 2013, that was published on Singapolitics.

“The only way to avoid making mistakes is not to do anything. And that … will be the ultimate mistake.”

— As recalled by Lim Siong Guan, former head of the Singapore Civil Service. Source: The Straits Times, May 15, 2010.

“It is lack of self-confidence that almost always prevents one from climbing higher on the ladder of success, that chains one to an obscure seat in the back row in the Auditorium of life. For in this age of strife and energetic competition you will not get anywhere unless you whip the world into making a place for you and you cannot do that if you cannot whip your faculties into obeying your will.”

— David Marshall, the first Chief Minister of Singapore. From an article written in The Rafflesian, Raffles Institution’s magazine, when David Marshall was a student (p38). Source: GOHD Books

“Finally, the third attribute of a great leader is influence. To quote Kenneth Blanchard, “The key to successful leadership today is influence, not authority.”

A strong sense of purpose or belief in what you are doing is a powerful motivating force. It gives people the drive to work hard, make sacrifices and keep going when the going gets tough. The same level of motivation will not be achieved if people were simply following instructions because of authority. A good leader will need, to be able to rally his team around him and win them over to his ideas. He will have to persuade and convince people to share his vision and follow him.”

“I am satisfied with what I did. I hope it was all for the best. I was elected to do a job. And I had to do that job whether the government — or anyone else — liked it or not… If they don’t like it, I can always come back here to my architecture firm.”

— Ong Teng Cheong, first elected president of Singapore, and former deputy prime minister. In an interview by Asiaweek after he stepped down as president of Singapore in 1999. Mr Ong was commonly known as The People’s President for standing his ground for the interest of the people – even at the expense of his popularity among the ruling party. Source: The Online Citizen