Reach Out To Professionals Near You With The Reach App 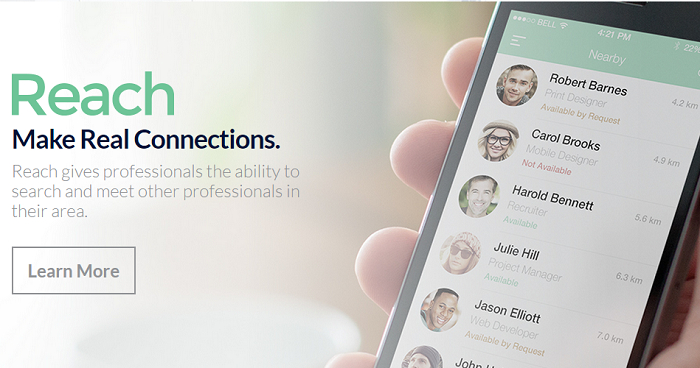 “I was in line with a colleague at a favorite restaurant of mine when our attention shifted towards the TV covering the NHL hockey strike. This strike impacted many of our clients in the marketing and advertising business. A woman ahead of us overheard our conversation and mentioned that her marketing agency had won a contract with a major energy drink and would be the lead on a hockey-based event that would catch the attention of disappointed fans in North America,” recounted Matt Kaine founder of the Reach App, when we contacted him.

“We chatted as we moved through the line. Before we left, we exchanged information and built a relationship which served as the foundation for a significant amount of business with her agency… I knew I wasn’t the only person struggling with standing out in a crowded space, identifying synergies and making real connections.”

This was the inspiration behind the Reach App, an app that exposes the business world around you and allows you to find and make real connections with like-minded professionals in real time.

Last September, Matt Kaine and his team released the Reach App for iOS platforms, and rolled out the version for Android platforms the following month.

Users can download the app for free and link it to either their Linkedin or email accounts. The app pulls the user’s location via GPS, and allows them to see if anyone else nearby is using Reach. “After a user reaches out, the other individual can choose to either accept or ignore this invitation to connect. Both users are then able to view each other’s contact information and carry on the conversation via email, iMessage or a phone call, depending on what privacy setting each user has selected,” explained Matt.

Reach can be used to connect like-minded people living or working close to one another, who would otherwise not get a chance to do so. “Reach is being used virtually everywhere from conferences and events to cafes and airport lounges. Reach users are making meaningful and relevant connections in real time,” he added.

The Malaysian Vulcan Team downloaded the app and found an echoing silence in the app’s “Nearby” function, meaning nobody was using the app in the region. With that in mind, we asked if they were doing anything to better this.

“Our user base, while in beta, is global with the largest audience located in Canada and United States. Our strongest European user base is in Germany, Poland, UK and France,” he admitted. “We’re slowly gaining exposure in Asia and we plan to expand more into Asia in 2015,” Matt added, sharing that cultural differences will play a key role in how Reach hopes to connect with users in Asia. While it is not unheard of for strangers to meet up and get to know each other, most would dismiss it altogether and rather not try at all. After all, there is always the possibility of ‘stranger danger’, no matter how old you are.

Reaching Out To Users In Asia

“As we build out 2.0, due for release in Q2 of 2015, we will also escalate our marketing and acquisition plan globally. We want to be the tool for real-time connections in every major hub globally,” says Matt as he shared the team’s plans for the app.

When we compared the app to Tinder, but for professionals, Matt told us that unlike Tinder, Reach doesn’t take connections lightly. “Reach is designed for those who are sincere and willing to take the time to make the commitment when deciding to make a professional connection. Reach’s outcomes far exceed and are not just limited to a new connection,” he explained.

“I cant wait to hear about a connection that was made on Reach that has led to a company forming after two people connected in real time using our app,” he concluded, adding that they welcome feedback from users, influencers and event organizers to help the app grow in Asia and around the world.

If it looks like an app you would use, have a go at it. Personally, I think that with the right amount of exposure, this app will do amazingly well in Asia, where startups are blooming. With the right app to connect like-minded individuals, it might just be the push people need to take the first step into starting their own businesses. It will have to win against competitors such as MeetUp and Lunch Kaki in Malaysia first, though!

Gen Zs prefer to use TikTok as a search engine, but here’s why Google will still remain king

Living up to his eccentricity, Elon Musk strikes again with a resignation via Twitter poll 

Rise of superapps: Why are Asian tech giants obsessed with keeping us under a digital fortress?