Kingsman: The World’s First Shoppable Film May Change E-Commerce As We Know It 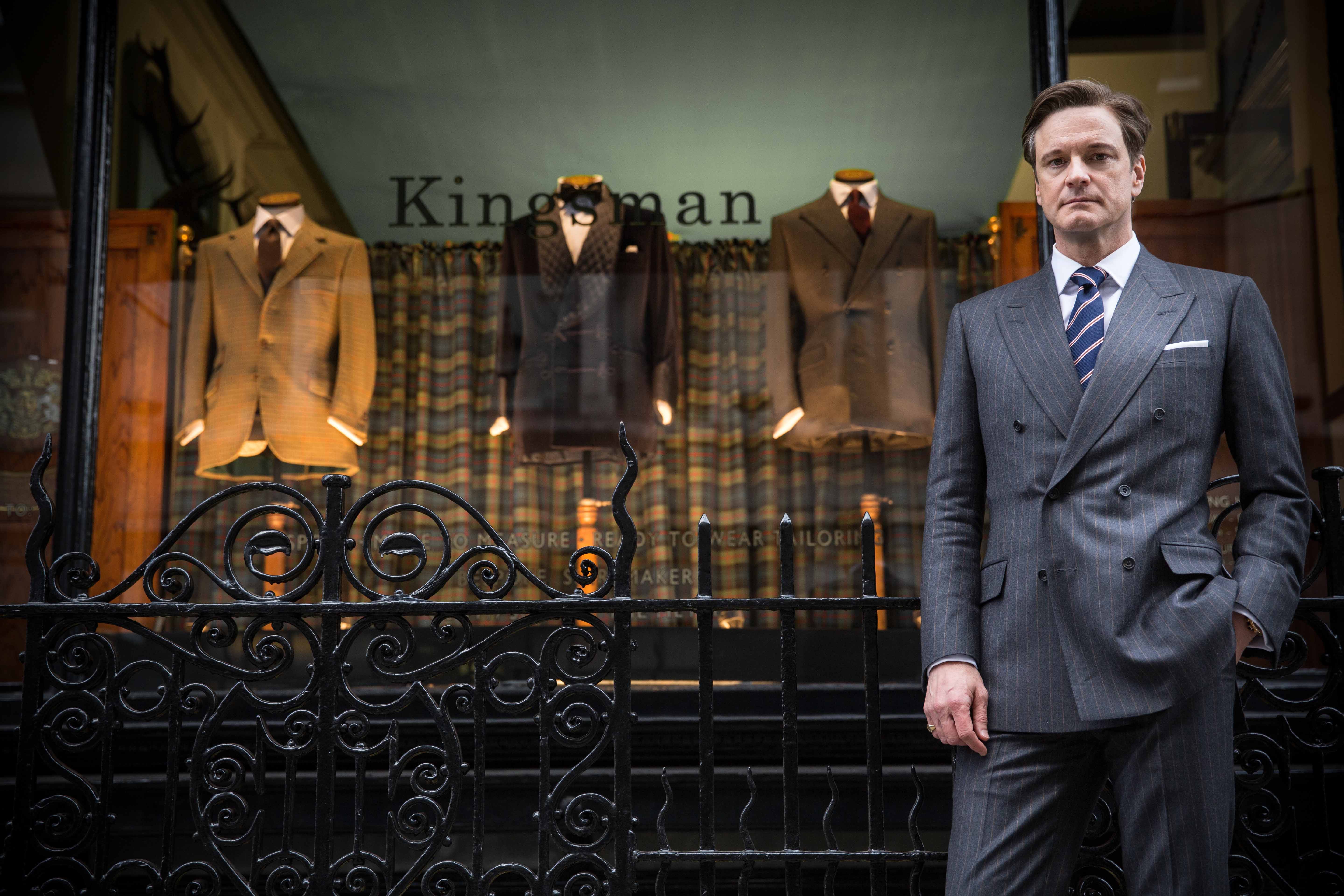 When a film is described as being about a group of secret service agents headquartered in Savile Row, you know you’re in for a visual treat — at least in the costume department. And this is exactly what Kingsman: The Secret Service (which premieres in Singapore on Thursday) is all about.

Unlike other well-costumed films before it, though, the clothes in Kingsman are not just something for you to gawk at in the cinema (and frantically search for on Google on bad days). The film is a groundbreaking one: it’s the first immediately shoppable film there ever was. This means that you can purchase the items that caught your eye in the film — right now.

The Kingsman collection came about as a result of a one-of-a-kind collaboration between costume designer Arianne Phillips, director Matthew Vaughn, online retail site MR PORTER, and a whole host of British heritage brands. It’s an impressive mix of creative and commercial brands, and together, they’ve brought to life the wardrobe of the Kingsman secret service agents, which is available now via the MR PORTER site here.

To get an idea of what it was like to work on the very first shoppable film, I spoke to costume designer Arianne Phillips about her experience with Kingsman, as well as her personal thoughts on design.

The beginnings of the world’s first shoppable film

The idea that a movie could be shoppable is not an entirely new one. For years, merchandise like toys and clothes have been pushed out alongside the launch of a film. But these items have never been part of the actual film set; they’re merely products inspired by the characters and costumes in a movie.

Arianne explained, “Traditionally, Costume Designers have not benefitted from any of the toys or merchandise that has been created based on a film. Which has been a thorn in the side of a Costume Designer, as you can imagine seeing your costumes live on dolls and packages without it benefitting — financially or even creatively — the Costume Designer.”

“[In film,] we do not own our designs; we are a work for hire, unlike in theater where we own them, are protected from cheap imitations, and receive royalties. So it is time Costume Designers are invited into the film merchandising equation, which makes all kinds of sense for marketing purposes, such as better, more integral products with the integrity of design intact.”

It’s understandable, therefore, why Arianne chose to take on this project. She said, “Matthew Vaughn, the director, asked me to design the costumes for Kingsman. At the same time, he proposed that I would also be responsible for designing a collection inspired by the costumes, and that they would be available exclusively on MRPORTER.com. The “Costume to Collection” [a short film about the creation of the movie’s costumes] was his concept, and he asked Natalie Massenet (the founder and CEO of Net-a-Porter and MRPORTER) if she would come onboard as a partner. She agreed.

“Natalie has been a long-time believer in content and commerce. This is the first project that MRPORTER has been in that involves partnership and manufacturing. I myself had long believed that if invited into the merchandising conversation, then as the Costume Designer of a film, I could add value and authenticity to the product,” Arianne elaborated.

Is the ‘shoppable film’ the next big step for online shopping?

With the rapid growth of e-commerce in recent years, I couldn’t help but wonder if shoppable film would become the future of online shopping. After all, die-hard fans have been known to go to great lengths to obtain a piece of their favourite films, so with the convenience and ease brought about by the introduction of shoppable movies, it seems the trend could catch on with quite a large group of audience.

I asked Arianne as much, and she agreed, “The relationship with film to fashion, and fashion to film, has always existed from the beginning of filmmaking. Film, like fashion, reflects our culture, tells stories, and encourages us to dream. Film is global; people all over the world have access to, and enjoy, film. And now, for the first time, we have the same global reach via e-commerce, which is essentially a delivery system.

“The combination of content and commerce is what the public wants — an authentic, special, and unique product. And film merchandising is big business: we see all kinds of marketing, from dolls, to toys, and even video games. But the fashion angle has yet to really take hold. I believe the time is now with online commerce; we can reach the same customer that is the film audience. So yes, I believe this is the future.”

Designing for a shoppable film

To the layperson, designing costumes for a shoppable film may seem no different from any other film. And that is largely true.

“Initially, it was no different from any other film I have designed: meetings with the director, research and development of the costumes. The job of a Costume Designer is to help tell the story — to create characters, help set the “tone” of a film, to visually and viscerally inform, as well as to assist the actor to do his job.

“I once read a quote that Laurence Olivier, the great English actor, said: that when he started on his research for a character, the first thing he would do would be to get the shoes. He started from the shoes up, which informed how he would physically inhabit the character, how the characters walked, and how they carried themselves. So in general my process was the same: I focused on my job as the Costume Designer, and on telling the story,” explained Arianne.

But it’s not as simple as we think. Costumes made for film — especially those which require special fabrics and prosthetics — can cost upwards of $100,000. And such exorbitant prices would not have sat well with prospective shoppers of the Kingsman collection.

To this, Arianne said, “Since I was aware that I would be creating a collection following the film, I made choices with fabrics that I knew could be available for the collection as well. I had to dig deeper for fabrics that could be milled and exist past the 1 or 6 suits we needed for the film.”

Arianne’s Instagram and Facebook feeds are a steady stream of beautiful images, behind-the-scenes snapshots and expressions of thanks to those who’ve lent her a helping hand. It’s a fascinating look at what goes on in the life of a costume designer (and one who designs Madonna’s tour costumes, no less). Intrigued, I had to ask Arianne how she managed to stay inspired with such a constant stream of projects.

“I am pretty one-on-one; I prefer not to juggle projects. I am very hands-on and enjoy my enduring relationships with directors and artists, so I believe being on the ground and focused on a job-by-job basis is paramount,” she explained.

“I am inspired by people, people’s stories, stories of transformation, and overcoming adversity. Nature, my husband, family and friends inspire me. My two dogs and cat constantly inspire me to be compassionate and sensitive. Travel inspires me. I am inspired by everything! Art, music, literature, poetry. My parents are VERY inspiring. I come from a long line of inspiring strong creative women,” she said proudly.

In a world where enthusiasm is sometimes considered uncool, it’s refreshing to see someone proclaim her love for her work so readily. When I asked Arianne about the most memorable part of designing for Kingsman: The Secret Service, she said, “The approach of every film is always like a complicated puzzle of creativity and logistics within a short time frame. It is much like being shot out of a canon and/or being on a wild roller coaster ride. The key is to be flexible, and communicative. This film was no exception, especially with the added component of knowing I would be creating a collection based on the costumes.

“There was no model or guidebook; we had to figure it out as we went. It was a great challenge – one that infused everyday with new challenges and possibilities. Which is exactly my idea of a perfect day at work. I am fortunate to have a job that encourages and demands me to keep learning. I love my job!” she exclaimed.

The idea that we can now own the actual costumes used in film is an exciting one — one that I’m more than ready to welcome. Goodness knows how many times I’ve tried to recreate an outfit from my favourite films, only to have failed miserably. If anything, shoppable film will make it so much easier at Halloween, and we won’t have to put up with half-hearted attempts at dressing up ever again.