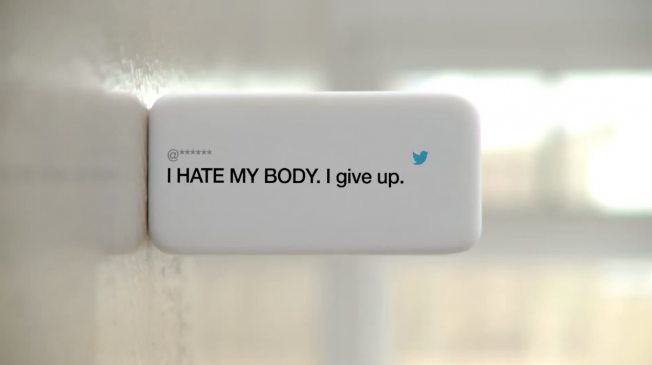 If you’ve been following the Oscars this year, chances are you’ve already seen this video:

In an attempt to counter the tidal wave of negative tweets about beauty and body image, Dove and Twitter have teamed up to launch the #SpeakBeautiful campaign. This initiative to boost women’s self-esteem kicked off during the Academy Awards pre-show, but will be ongoing all year round.

What happens is this: when a Twitter tool detects negative keywords in tweets, such as ‘ugly’ or ‘worthless’, Dove’s self-esteem experts will reply with positive messages and advice. In addition, #SpeakBeautiful encourages women to post things they love about themselves and others, in hopes of creating a domino effect of empowering conversations on social media.

And judging by Twitter and Dove research, #SpeakBeautiful seems all too necessary. More than 5 million negative tweets about body image – whether in criticism of self or others – were posted in 2014, and women are currently 50% more likely to put down than compliment themselves  on social media. Then there’s the data that Dove tweeted live during the Oscars:

Together – we can change the conversation. #SpeakBeautifulhttps://t.co/34F577T2Kp

The power is in our hands. #SpeakBeautifulhttps://t.co/NCS657sdgI

Those stats give you a general idea of the malice going around on social media. While this is definitely not to say that they form the majority of Oscar-related tweets – according to Nielsen, 13 million US Twitter users alone checked out the show – that’s rather a lot of revulsion at a gathering of some of the most beautiful, talented people in the world.

There’re the customary critiques of outfits and fashion…

omg. The world is on fire and twitter is filled with dresses and ugly statue #Oscars2015

…which naturally get more and more personal.

They've let a fat person into the #Oscars2015

These are the more printable (and marginally creative) ones.

So it’s sweet that amidst a whole lot of negativity, Dove and Twitter are trying to raise awareness of the huge impact our online words can leave, and the importance of viewing both ourselves and others with kindness and optimism. Scrolling through all the #speakbeautiful tweets, I’m reminded of how storied and unique we all are; there is no way that we can’t find at least one thing to love about ourselves, and the people around us.

Here’re some of the best feel-good tweets that their self-esteem experts and the Twitter community have posted so far:

@mstweeny1 We LOVE it! Your positivity has more of an impact than you know. #SpeakBeautiful pic.twitter.com/agnYb5kSSt

@raacheldiaaz We all struggle with self-confidence sometimes, Rachel. Focusing on something we love about ourselves can help.

@theycallmemsmac Your story is more beautiful than you know. We love how you spread positivity to your students! pic.twitter.com/xSDIfBxjt2

@KellieLawr It can be hard to #SpeakBeautiful about ourselves, Kellie. Try speaking about yourself like you would a loved one.

@LeslieGroves Your kind words to your friends can lead to positive thoughts and feelings. Thank you for sharing them! pic.twitter.com/IbenoJlvoa

And finally, my personal favourite:

@larissap1215 This is so true, Larissa. When you are confident, you help yourself & inspire others to do the same. pic.twitter.com/cos0DqvCkf

To further restore your faith in humanity, do check out the @Dove Twitter page. If you’ve been inspired by the #SpeakBeautiful campaign, you can also support it by tweeting things that you love about yourself, your friends, and all the wonderful people in your life.

Also Read
Nude Photo Scandals, And Why It Is An Important Measure For Humanity
Categories: Lifestyle, Tech For Ladies, Social Media User, Luminary