How To Be A Pro At Crossy Road 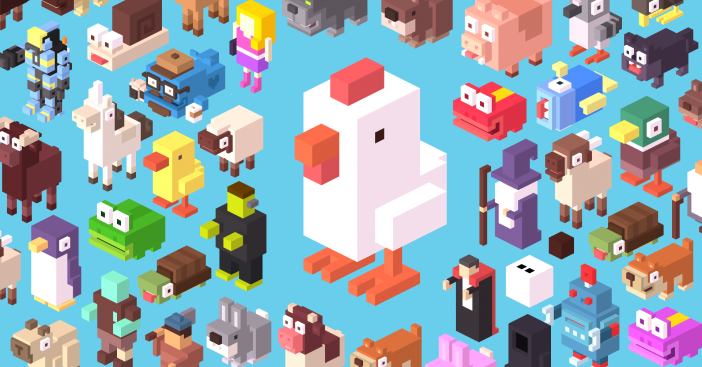 Crossy Road remains as one of the Top Free apps on Android and Apple app stores in Singapore, but the elusive high score of 1000+ remains excruciatingly impossible to get. This extremely addictive game may seem easy to play from the moment you hit ‘Start’, yet it is also just as easy to fail.

If you’re new to the game, Wikipedia describes it as “a play on the joke ‘Why did the chicken cross the road?'” Simply put, players must try to get across various terrains such as roads, rivers or train tracks in order to win points. They get points for moving forward, and can exchange virtual coins collected in the game for surprise freebies.

After several intense gaming sessions, we present some infallible tips and cheats to inch you closer into the Crossy Road hall of fame.

How To Select Screen Modes

Depending on your playing style, landscape affords you a wide-angle view, while portrait gives you more of a tunnel vision to plan ahead. I don’t recommend swiveling your phone often though; it wastes precious time before the eagle attacks, and is really disorienting.

I chose to go with landscape and locked it under the Crossy Road settings. It’s rare for the avatar to survive a sprint of more than 7 consecutive lanes anyway. It also feels less claustrophobic, and gives you more breathing room to contemplate your next move. Plus, you get more space on the screen for both thumbs to hop and swipe.

How To Hop And Stop

In Crossy Road, the greatest competition is yourself. Controlling your thumbs from over-tapping is a challenge in itself. Under pressure, I guarantee they will have a mind of their own.

Don’t be constrained by the space you have on the small screen. Tapping on your character too closely will cause you to block out the hazards and obstacles closest to you. Place your thumbs at the edge of the screen so you have an unobstructed view of the middle. That’s where you want  your avatar to stay the majority of the time, since it usually leads to the safest path.

If you realised that you have made a false-start, don’t lift that finger from the screen! Hold and slide to swivel your avatar. It will hop in the direction that it faces when you release. Backtrack by sliding down instead of trying to outrun the vehicle in the same direction it’s going.

How to Cross Multiple Lanes

This is a matter of timing. Jump right after a car has passed to hug as closely to the bumper as possible. It will give you some leeway to wait on slow-moving lanes before skipping through lanes with speeding traffic. The same goes for logs as well.

Anything more than 3 lanes might seem daunting, but don’t panic! Just hold the screen slightly further away from you. It will help you spot ‘negative space’. Gaps between vehicles will be more obvious when you look from the macroview.

Apart from looking ahead to spot train signals, bridging logs, and gaps in traffic, keep a sharp eye out for the lily pads and coins as well. Align your avatar to the lily pads and coins while it is waiting on the sidelines. These can make or break your sprint record. It’s no use to sprint past 5 roads, only to find yourself facing inevitable drowning without a lily pad.

How To Form A Strategy

Before you hit ‘Start’, tell yourself to stick to the plan. Are you aiming for coins, high scores or tactics to unlock mystery characters? Pause the game to rethink your plan if you find that Plan A isn’t going well.

Don’t hesitate for more than five seconds when the game begins, or be prepared to be swooped away for the eagle’s next big meal. You know the end is near when your avatar starts slipping out of view.

There will be openings in the traffic, and occasions when Lady Luck is on your side, aligning all the logs together in a temporary bridge. Or if you are really lucky, Hipster Whale — the original mascot of the company — will be there as your stepping stone.

Sprinting through these opportunities require precision and quick thinking, especially when it involves a combination of lateral moves. Don’t be afraid to move sideways on the roads and on the logs. For instance, a double swipe right could be your ticket out of a deadlock between two cars in the same direction. Take baby steps in complicated traffic, instead of waiting to dash across the road at the last second. The latter will most probably end in tragedy.

Most importantly, keep your cool and go with the plan. You’ll see that the coins matter more than the collisions.

How To Avoid Riptide

The only way to avoid it is to notice it. Usually, players are too caught up with spotting planks to step on that they don’t realise they are drifting closer to the white froth in the river. A safe bet is to always try to keep as closely to the middle of the river as possible.

But when you do veer too close to the edge, this combination of ‘tap-slide-tap’ usually helps. Get your avatar on to the plank floating in the opposite direction, and enjoy the ride back. Don’t get overexcited and decide to take a dip in the waters to cool down.

Hop onto the crocodiles as well. They won’t bite.

How To Unlock Crossy Road Secrets

The big question is: which is the best character on Crossy Road?

I would say go with Flea. It’s the smallest character on set that can be unlocked in the vending machine (gacha), which means plenty of space to maneuver between traffic and tight spaces. It is, however, only a single voxel, so it’s not the most appealing to watch, nor is it the easiest to keep track. Humans are your next best option, because they seem to move faster and aren’t as bulky as the animals.

Each Crossy Road character moves at the same speed and are just as accident prone as the other. Hence it is really down to how easily distracted you are. I would say the least distracting ones are the poultry. Most distracting characters have got to be Doge, with its Comic Sans misspellings; Swift Snail, that leaves a trail of slime; and Frankenstein, who travels in a black and white setting that removes visual cues of approaching trains and safe meadows.

Other characters are just as fun to play with and have their own secrets to unlock them in gacha.

For example, by using Forget Me Not — the minimalist white cube with a pair of black squares — collect 20 flowers to unlock a ghost that floats across the screen.

Using an Australian avatar, move close to the character perched on a rock or the tree canopy. Drop Bear will pounce for an instant game over, but will unlock mystery characters such as Crab (if you have swiped left and right across sandy patches more than 100 times) or Drop Bear itself.

Hipster Whale can be found with any character in the rivers. Word is that it takes at least 70 jumps, but I spot it occasionally within the first 20 jumps. It takes careful scrutiny to spot the random appearance of Hipster Whale. The top view of Hipster Whale looks like a blue robot with a brown cube on its head. All you have to do to redeem it is to jump onto its back, and retrieve it after the run. I have to say, it was just so satisfying after 3 hours of play.

Pokemon players, you know what I mean.

Gamezebo has the full list of characters and how to unlock them.

There are unlimited coins and life cheats available on the Internet with a simple Google search, but that defeats the purpose of a challenge. If you want to be fed with a silver spoon, though, then go ahead with the hacks.

Otherwise, continue playing the game and enjoy the challenges. Every victory will feel like an actual win. As we all know, the only opponent in Crossy Road is yourself.

Also Read
How To Be A Pro At Sims 4
Categories: Entertainment, Serial App User, Geek, Tools and Tips