The HTC One M9 Is Finally In Singapore: It’s Good, But Is It Good Enough? 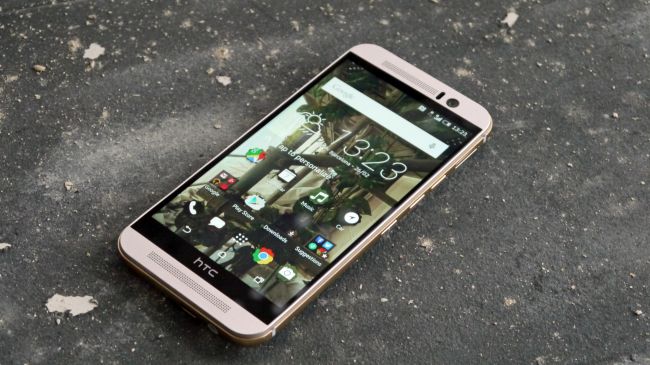 Mark your calendars, HTC fans: HTC has set the launch date of their newest flagship handset — the One M9 — for May 2, or this Saturday.

In order to help you decide whether or not to get the phone — S$1,008 is pretty pricey, after all — we’ve put together a few first-hand impressions of the One M9.

HTC is touting the One M9 as a “piece of art” with a “jewellery-grade look”, and they’re not far from wrong. The dual-tone rose gold and silver model, which I received, is nothing short of stunning. The burnished metal unibody gleams, and the sleekness of the finish makes the smartphone a joy to hold and behold. In the hand, it feels like a hybrid between the M7 and M8 — it’s curved and polished like the M8, but retains some of the angularity of the M7, producing a handset that’s comfortable to grip.

One possible gripe about the design might be the location of the power button. It’s all to the good that HTC shifted the power button from the top to the right side of the phone, as most smartphone makers have done already. But HTC also made the mysterious decision to position it around the middle of the right-hand side, which is far too low to press comfortably.

The volume buttons are also of the same size as the power button, making it annoyingly easy to press them by mistake. This gripe is by no means a deal-breaker since you can also double-tap to wake the screen, but it is a puzzling one considering the huge amount of care that HTC apparently put into the M9’s design.

The HTC One M9 features a 5-inch 1920 x 1080 pixel resolution display. While some of its competitors boast a higher resolution — Samsung and LG have chosen to go with 2560 x 1440 Quad HD screens on their newest flagships — that doesn’t seem to put it at much of a disadvantage. The visuals it provides are clean and sharp, even when I set the screen to low brightness, and viewing angles are still excellent.

Also Read
OPPO Mirror 3 Singapore: A Smartphone And TV Remote — All In One

The One M9 features the latest octa-core chipset — the Snapdragon 810 processor with quad-core 1.5 GHz Cortex-A53 and quad-core 2 GHz Cortex-A57. As expected, its performance is generally as smooth as the M8’s, if not better. The LCD3 touchscreen is highly responsive — most apps flick open with nary a pause — and there’s little scrolling lag time. The one notable exception I encountered was with the Themes application: a few seconds after I opened the app, it crashed.

After I reopened it, it crashed again.

No matter how many times I tried, I couldn’t scroll to the bottom of the page without Themes crashing, which wasn’t too inspiring since I doubt the app needs that much processing power. However, CPU-intensive tasks like video-editing and Google Chrome ran smoothly, so this may or may not be simply a quirk of my unit. By staying near the top of the page, I did manage to download some gorgeous themes eventually.

Another worrying point is the heating up of the metal body. A few reviews have already raised the issue of the Snapdragon 810 processor overheating when pushed. While HTC has reportedly fixed this with an OTA update, the phone did get uncomfortably warm after five minutes of using the camera. It’s less of an issue since it doesn’t seem to affect the phone’s performance, but I wonder how well this bodes for the phone’s performance after a year.

One of the big upgrades that the M9 is getting is Sense 7, which HTC touts as a huge step forward in a personalised smartphone experience. We spend so much time with our smartphones that they’re practically an extension of ourselves, and the new Themes app allows you to customise your phone to your heart’s content.

Here’s one of my favourite features of the phone: with Themes, you get to create your own themes from a photo of your choice, complete with cohesive colour schemes and multiple styles. The themes already offered in the Theme Store are of great quality, and this special customisation option is the icing on the aesthetics cake.

Another amazing feature that Sense 7 delivers is the Sense Home widget, which strategically changes the apps featured in your home screen depending on your location — home, work or play. Once again, you can customise the apps you want displayed for each location. I find it a good way of balancing between convenient access and keeping my home screen clutter-free.

Running an incredible 20.7MP rear camera on paper, the M9 promises a lot in terms of photo quality. In practice, it’s somewhat underwhelming: the Samsung Galaxy S6 reportedly takes better pictures, and the latter has optical image stabilisation to boot. For me, the auto-focusing appears slower, although touch focusing is decently fast. The colour quality is also peculiar, with distinct discolouration in some photos. In other words, the company’s megapixel gamble hasn’t quite paid off.

While the main camera is weaker as compared to those on its rivals, the UltraPixel selfie camera is a respectable low-light performer, capturing high quality photos even in dim lighting.

Like previous models, the One M9 boasts a comprehensive suite of image-editing tools, from old favourites like Zoe to new editing features like Prismatic, Photo Shapes and Face Fusion. In terms of artistic effects, the One M9 has much more to offer than its competitors, but it certainly doesn’t have the best camera around.

With BoomSound speakers supercharged with Dolby Audio, audio delivery on the HTC One M9 is unquestionably spectacular. Whether it’s sheer volume or clarity, the dual speakers deliver — there’s no need to plug in headphones or external speakers when you’re watching a video, because theatre mode provides a rich, powerful experience. I dislike taking phone calls because it usually involves repeated rounds of hollering “What? I can’t hear you!”, but the M9’s excellent sound quality makes calls much less of a pain.

It all comes down to what you’re looking for in a smartphone: a first-class camera? Stunning aesthetics? The HTC One M9 is a bit of a mixed bag, with great personalisation options, powerful audio, average display and performance, and an iffy camera.

It’s an insanely competitive smartphone market right now: Samsung’s head is well in the game with its well-received Galaxy S6 and S6 Edge, LG enjoyed a great reception with its G3 and is now building up to its release of the G4, and let’s not forget about the iPhone 6. Unlike all its competitors who seem to have significantly upped their game, HTC’s new flagship isn’t a huge step above the M8, and is hard-pressed to beat rival offerings in most aspects.

Ultimately, that’s not to say that HTC’s One M9 isn’t a great smartphone — it is — and it’s enough of a powerhouse that it can likely handle anything you throw at it. It might not quite live up to expectations, but it’s definitely a decent, undeniably attractive smartphone.