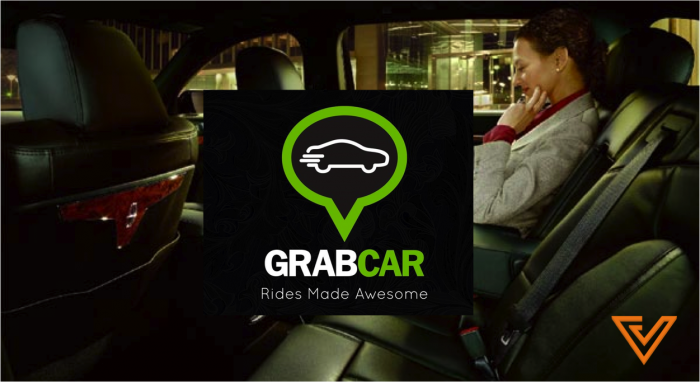 Back in July 2014, popular taxi-booking service GrabTaxi expanded its pool of available drivers with GrabCar, offering premium 4-seaters, as well as 6- and 13-seaters for passengers. As of April, there has also been a new and more affordable addition to its private car services — GrabCar (Economy). To celebrate the launch of the new service, GrabTaxi is also giving out GrabCar coupons to passengers.

If you are one of the 3.8 million people who have downloaded the GrabTaxi app on their phones, you will be able to book an affordable private car to pick you up. And much like you would with taxi-booking, the app will pair you up with an available driver. According to GrabTaxi, the number of users who have tried GrabCar since its launch earlier this month is already in its thousands.

To test out the service, we called a GrabCar and went for a ride.

To celebrate the end of a work week, fellow Vulcan Post editor Charlene and I decided to grab some dinner at Orchard Road on Friday. Despite it being peak hour on a Friday evening, we decided to call a car to come pick us up, expecting the worst.

We were gifted with Nicole, who was very chirpy and friendly — and also very quick. When she accepted by booking, I was presented immediately with a photograph of my driver, a in-built function to call or text her, and her payment preference (she prefers cash). She arrived earlier than I expected.

I was surprised that once I entered my pick-up point and destination, the app provided me a pre-determined fare — a very attractive feature that takes all the anxiety and guessing out of private car rides. When I spoke to Nicole about the system, she said that it is to make sure passengers have full transparency with regards to what they’re paying for. It also takes a lot of heat off drivers — even if they accidentally take a longer route or get lost, the passenger knows full well that they won’t have to pay for their mistake (other than a little lost time).

The pre-determined prices are not plucked out of thin air — they are calculated according to distance, time, location and demand.

There are additional costs applicable for the driver’s sake: additional waiting time is S$5 per 10 minutes, and additional stops are chargeable at S$5 per stop with a maximum of 3 stops allowed if the additional distance travelled is less than 5km. For distances equal to 5km and above, passengers will have to create a new booking.

Speaking to Nicole, she shared that many of the GrabCar drivers she knew did this part-time, but enjoyed the experience of working with GrabTaxi. She shared that unlike other driving services that she’s experienced or heard of, GrabTaxi took the feedback of the drivers very seriously, and often implemented suggestions within a few days.

One example she raised was the fact that ERP charges were added on to stipulated fares, rather than included into the pre-determined prices. Such a system ensures that drivers don’t have to bear such costs themselves, and gives passengers the option of taking a different (and possibly longer) route to avoid those costs. It’s also a new implementation, and Nicole shared that passengers have been pretty understanding of the changes so far.

Private cars aren’t that popular in Singapore as of yet, but GrabCar might just be able to capture the local market. With transparent prices, drivers’ details made available to passengers (giving them a greater sense of security), and drivers like Nicole, it’s easy to feel safe travelling in a private car.

It also doesn’t hurt that a GrabTaxi coupon is now available: if you’re interested in trying out GrabCar for yourself, you can use the promotion code GRABVULCAN to get $8 off your first 2 GrabCar rides across all categories, from Premium to Economy, and even on the 13-seaters. The coupon code is valid for two weeks until 12 May, 2359 hours.

Also Read
Singapore May Have Electric Taxis In The Future; This Is What They Will Look Like
Categories: News Reader, Lifestyle, Serial App User, Deals/Promotions, Singaporean, Yahoo News