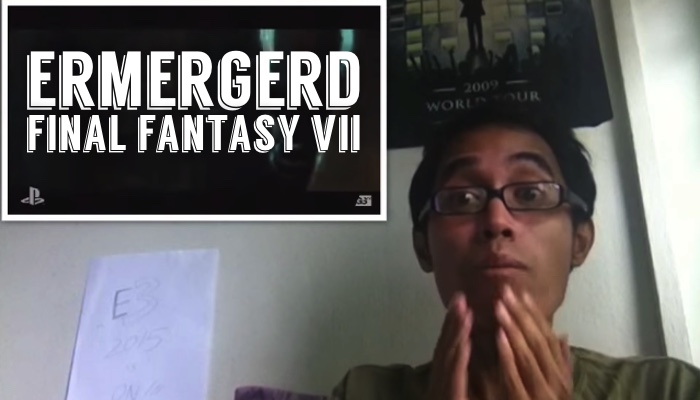 Tears of joy, tears of mirth — the Final Fantasy VII trailer is everything fans of the original game have been waiting for.

There are a lot of things that make us cry. People dying, MacBooks dying, pictures of animal cruelty, pictures of cute animals, Game of Thrones…and the announcement for a remake of Final Fantasy VII after 18 whole years.

That’s what happened when Singaporean gamer and Final Fantasy enthusiast Faruway watched the big reveal of the remake trailer at the recent E3 conference.

Final Fantasy VII (FFVII for short), was THE entry-level fantasy role-playing game released in 1997. For most of us, it was our first introduction into the gaming world. With its state-of-the-art graphics and award winning musical score by Nobuo Uematsu, it was a game that resonated with a lot of gamers in Singapore. Besides this nostalgic element, FFVII is also most highly regarded in the gaming community as one of the greatest games ever, and references to the Final Fantasy franchise still pepper the pop culture world.

Just to show how long 18 years is in gamer time: the original FFVII was played on the very first PlayStation — now, in 2015, we’re mucking around on the PlayStation 4, a next-gen console. Fans have salivated for a remake for years, while spin-offs and sequels came and went. Like the attendees at the conference, Faruway was overwhelmed with emotion when the trailer screened.

Feel all the feels:

It opens with a panoramic shot of Midgar, the capital city on and power base of the Shinra Electric Power Company, as well as roads that look similar to one feature in an FFVII iconic chase scene.

Then it zooms in onto two figures: one, a man with a gun barrel for an arm, could only be Barret Wallace, a key character in the game. Strutting behind him is Cloud Strife, FFVII’s primary protagonist. And this is where shit happens. Faruway starts bawling from then on. He’s not the only one, really. Comments that were in solidarity with the mega fanboy poured in. We’re kinda with him on this as well.

What scene are you excited to experience again with this remake?