I Tried Out The Oculus Rift For The First Time, Here’s What I Think Of It 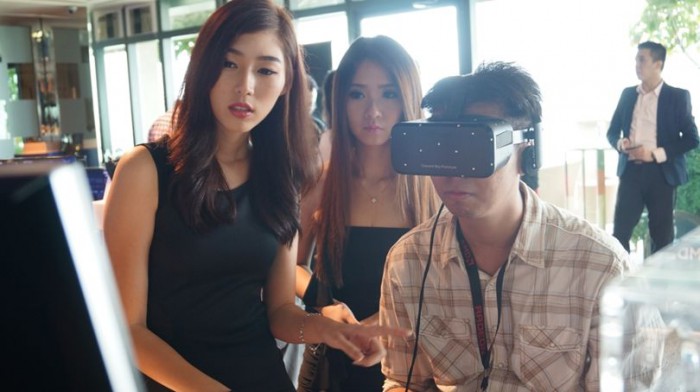 On the 1st of July 2015, I went to AMD’s launch of their latest and greatest graphics card offering, the Radeon Fury X. To be honest, I was looking forward more to the Virtual Reality headset demo, which was done to show people how powerful the Fury X is, as I never had any experience with VR technology before. With VR technology in mind, there was a big surprise waiting for me at the event.

The event had several computers available for demo, each with their own unique setup. Some had a horizontal 3-monitor setup while another had an Oculus Rift headset plugged in.

For those who aren’t aware, 3-monitor setups work with the central monitor as the main focus while the other 2 monitors provide additional surrounding views in-game or display a menu item, depending on the game being played. The Oculus Rift headset—made famous by several YouTubers, most notably Pewdiepie—is a mix of a helmet and a pair of goggles.

This is, by far, my favourite part of the event. I was told that there will be Virtual Reality tech up for the attendees to try but I didn’t expect the Oculus to be making an appearance. You see, the Oculus is still not released to the masses and is expected to be released around Q1 2016 so whoever that has one of these, it’s most likely an Oculus development kit. For example, the ones being used by YouTubers are most likely to be the 1st or 2nd prototype from the development kit.

Furthermore, not many games support VR technology so there’s still much to do with it even if you had one.

The game that was being played with the Oculus is called “Back to Dinosaur Island II”, which is an E3 tech demo. I was told to sit down while the Oculus attendant put on the Oculus headset on me. I was immediately blown away after putting on the headset. It was as if I teleported into a new world. Everything looked realistic. I was given an Xbox 360 controller to control actions in the game. To view anything in-game, I didn’t have to use the joystick. I just had to move my head around.

The Oculus has a 360 degree vision so whether you look up, down, or even behind, there’s a beautiful sight to see. On a more surprising note, you can actually view objects farther or closer by moving your head back and forth respectively. The game’s objective is to climb up this massive hill and while doing so, certain events will trigger. It’s mostly seeing Pterodactyls flying around but it’s still pretty cool nonetheless.

As I was climbing up the cliff, I was instructed by the attendant to look down and let go of all the buttons on the controller. Little did I know that I was indirectly instructed to fall down. It was so scary, I really thought that I was falling down and I nearly tumbled down the chair I was sitting on. Embarrassing, I know. Unfortunately, that’s all there was for the Oculus Rift demo.

I’d like to point out that the Oculus seems to have been vastly improved from what I’ve seen and heard on YouTube. Some YouTubers noted that they feel uncomfortable on their nose due to a lack of cushioning material in that area of the headset. Pewdiepie mentioned in a few videos that he feels nauseous using the Oculus, even after using it for a short period of time.

Also Read
AMP: The Mighty iPhone Case That Doubles As An External Speaker AND Extended Battery

The headphones on the headset were terrible though. It looked and felt like it could break down at any moment. Replace those with surround sound gaming headsets and you have yourself a solid device.

For me, it felt really comfortable and I didn’t feel nauseous. Scared yes, but not nauseous. However, that may be thanks to AMD’s LiquidVR technology in the R9 Fury X, at least according to the attendant. Might just run some more tests in the future to see if this statement is in fact, true.

Of course, I wasn’t the only one who tried on the Oculus Rift headset. I brought a friend along to the event and this is what he has to say about the Oculus:

“Here’s the impression I got after testing out the Oculus VR headset the other day. I have to admit I was a little weary at first upon testing the Oculus because I’ve heard a lot of people saying that it can get very disorienting and nauseating but thankfully I didn’t experience any of that. Instead what I got was just sheer awesomeness. I couldn’t stop going all ‘ooh’ and ‘ahh’ throughout the demo.

The headset was very comfortable even for a guy with a huge noggin like myself. It was surprisingly light considering the overall bulk of the device and at first glance it did seem a little clunky in the way it looks and feel. I have to say the visuals on the thing was top notch. You really feel like you’re inside the game environment with the stunning 360 visuals. However, the one I tested was a little blurry, maybe it’s just me not having the Oculus adjusted properly or because I didn’t have my glasses on so it took a little off of the spectacle but I was still for the large part, blown away by it’s ability to immerse myself into a separate world.

The sound could’ve been a little better though. The ear pieces were competent enough for a satisfying experience but I could still hear noises from outside so I had to concentrate harder on the visuals to compensate.

All in all I enjoyed the Oculus Rift and I do believe it represents the future of not just gaming itself but also the way we view media as well. But (very big ‘but’ here) for now it comes off as very gimmicky to me without having much purpose other than to tickle your senses, very much like 3D cinema that the novelty can quickly wear off with repeated uses so it’s safe to say that it won’t be a major home stay in terms of gaming apparatus for gamers. I’m looking at you, Kinect.

So here’s to the future.”