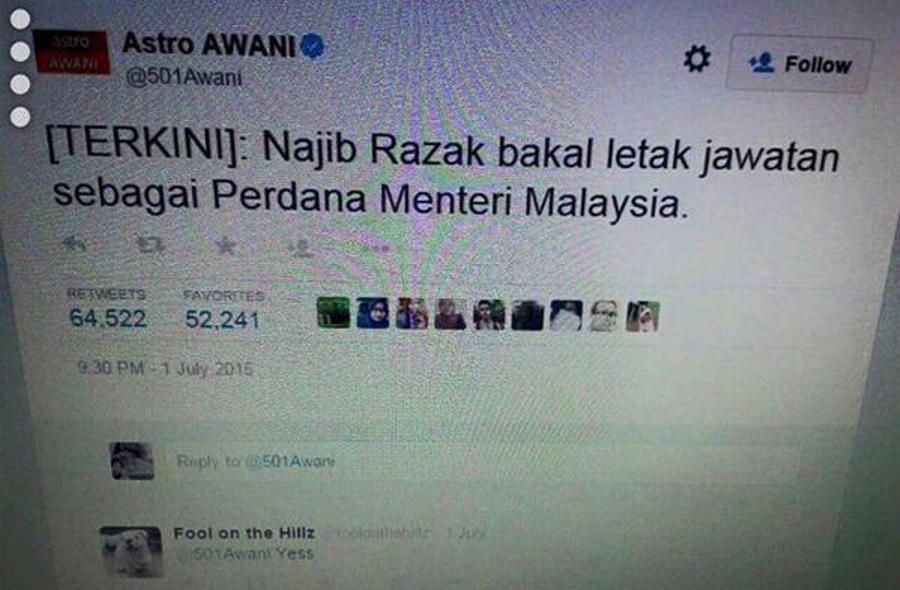 A screenshot of a tweet by a Twitter account named Astro AWANI went viral and caught the attention of many netizens. The image is of a tweet suggesting that Najib Razak was going to resign as the Prime Minster of Malaysia.

The real verified Twitter account of Astro AWANI, one of Malaysia’s leading news portal, has clarified today that the tweet is not genuine and that they are not in any way responsible for the bogus tweet.

“We would also like to highlight the existence of dubious applications which permit irresponsible parties to imitate the Twitter account of other users,” Astro AWANI said in an article published today. A police report will be lodged by the management of Astro AWANI.

While Astro AWANI is in the midst of clearing their name and making sure that the authenticity of their news content is not affected by this bogus tweet, it seems that many readers and netizens are disappointed of this turn of events—because they had hoped that the tweet was true.

Facebook user Hasnul Helmi commented on Astro AWANI’s post in Bahasa Malaysia, “If Najib resigns, this would be the most meaningful Aidilfitri.” His top comment has already garnered 3k over likes in 12 hours.

Another Facebook user, Mohd Shafiq, also commented in BM, “We hope that this will really happen, don’t need to ignore the tweet. Najib please resign, you are causing a lot of suffering for the people.”

Twitter users are not hiding their disappointment as well. NurLinda tweeted in BM, “I was just about to make pulut kuning with chicken kurma for this happy news, but turns out it’s fake..” Ridwan Zulkharie added, “1Malaysia is already happy but in the end it’s fake.”

There are, however, some skeptics. Twitter user TriStupe commented that the image of the tweet does not look fake. Some Twitter users have then pointed out websites that allows anyone to create hoax tweets that looks like it’s been posted by other Twitter accounts (to discourage people from trolling, we will not link those websites in this article. But you could always just Google to find out—if you must).

Out of curiosity, I tried it out for myself. This was the closest I could get to recreating that bogus tweet.

Notice the differences between this creation and the one in the circulated image?

These images don’t even look close to the bogus tweet. So then how was this “bogus tweet’ even created? Could it be actually real and Astro AWANI is covering it up?

Ok no, I just needed to use someone famous on Twitter who has over ten thousand Retweets and Favourites because if you’ve noticed, the fake tweets have no comma in between numbers that are over a thousand.

One obvious difference between this real tweet and the bogus Astro AWANI tweet is that the position of the menu bar with the Reply, Retweet, Favourite options is at the bottom of the time and date stamp—unlike the bogus tweet which has the menu bar directly below the text of the tweet.

Fake tweets are easily generated, but there are a lot of flaws within the fake tweet that can be identified if one were to take the time to look at it closely before jumping to assumptions.

There are, of course, other ways to go about making it look more believable (read: Photoshop). But they’d have to really hold a strong grudge or have a lot of time on their hands to put in the effort to taint a Twitter account’s name.

And that is just sad.

Also Read
This FB Video Shows Us How Easy It Is To Identify A Fake RM50/RM100 Bank Note
Categories: News Reader, Opinions, Must Read, Malaysian