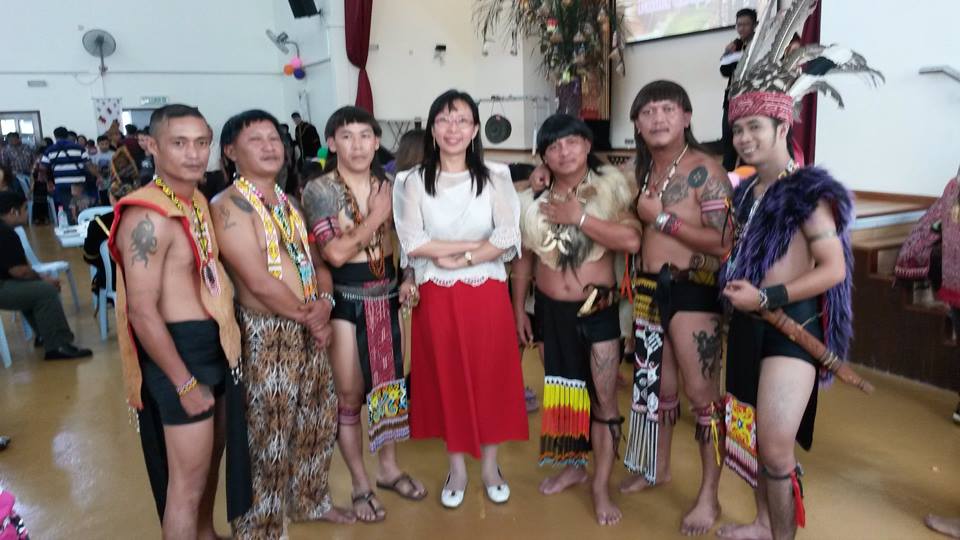 Dress code has been a hot topic lately in Malaysia. First Farah Ann Abdul Hadi, who won 6 medals in the artistic gymnastics competition at the 28th SEA Games in Singapore, became the talk of the town when her costume drew criticism. Following that, we had numerous news whereby people were not allowed to enter the City Council and Defense Ministry because they “violated the dress code” for not wearing the right attire.

Just yesterday, Seputeh MP Teresa Kokposted a photo of her with several Iban people dressed in traditional clothing on Facebook to point out how they will be barred from government offices due to their attire. Teresa Kok mentioned that these traditional clothing are a part of Malaysia’s culture and that they should be preserved because it is a tourist attraction in Malaysia.

Despite Kok having the right intentions when publishing that post, it has since received a lot of negative feedback and response from netizens.

The post has gathered almost 4,000 comments, most of which—especially comments from the Sarawakians—are unhappy with Teresa for not being able to differentiate between traditional clothes and proper attire.

Facebook user Pavl Alan Morsion commented, “I’m Sarawakian. It is simple, these are the Iban’s traditional clothes. We only wear them during festivities or certain rituals. Stop the nonsense.”

Another user AgguNesu ReHa AgnesLeha commented, “We’re not wearing our traditional costume to the office. The Iban also know the law and proper attire to go somewhere instead of wearing ‘sirat’. Do you think that the Iban people don’t wear clothes? I might say that this is the kind of person that still lives on top of the tree, having no idea about latest developments. Peace no war.”

Facebook user Alwi Adam EzazWealth commented that Teresa does not seem to know much about Sarawakians. “The Iban, they’re no longer wearing this sort of clothing for daily activity, this is traditional clothes. Teresa you thought the Iban are still living in the rural era? They’ve progressed [lah],” he added on the Facebook post.

There is a bigger issue here other than recognising that the Iban are well aware of the difference between traditional and non-traditional clothing—the purpose of the existence of their culture. Kok mentioned that their culture plays an important role in the Malaysian tourism industry, and thus the need to preserve it.

Cyren Asteraceya pointed this out clearly in this Facebook comment by saying, “There is so much more to the traditional garb of indigenous communities that dont even come CLOSE to being able to be represented by things like “tourism” or “dress code”. I mean, “TOURISM is the main reason why these cultures should be preserved/respected”… are you serious??? This is the problem with urban politicians who cannot see beyond their own agendas or actually take the time to know of communities outside of their own. People are more than just “voters” you know…

And Malaysia’s indigenous/original peoples are not commodities and there is more importance and significance to their culture than its perceived monetary worth through the lenses of tourism.”

Following these comments, Teresa has posted a response on her Facebook wall; however, it has just made things worse. What’s even more surprising is that there are quite a number of people who strongly support the stricter dress code for official buildings.

“I agree with the dress code which was proposed by government departments. Sometimes people dress scantily while doing their business in the government offices. This is not about whether you’re Muslim or non-Muslim, it’s about common courtesy. YB Teresa, I have lots of Iban friends, they don’t wear this [traditional clothes] to the government office. Next time, don’t use traditional clothes as an example,” said Donny Chua.

It is understandable that Teresa is concerned about our country’s over-conservative nature due to the recent incidents surrounding appropriate attire, but we have more important things to worry about and frankly speaking this issue is blown out of proportion when there are other matters to be dealt with.

At the end of the day, individuals and authorities of power should learn to pick their battles and focus on more pressing issues at hand.