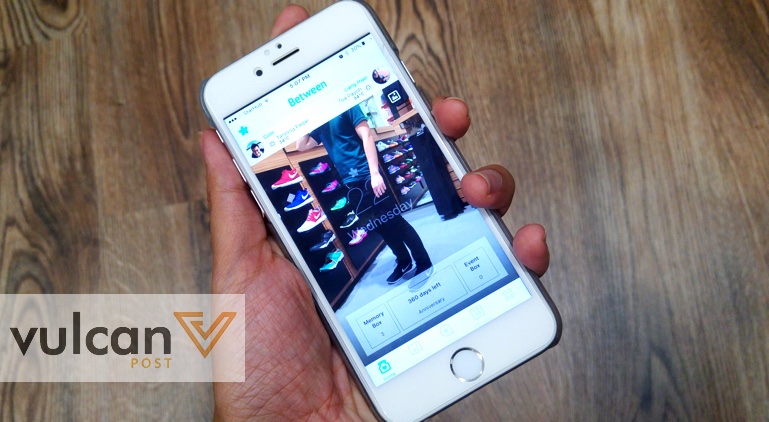 “14 days, 10 tasks, and let me know if it has helped strengthen your relationship.”

That was the challenge set out to me by Joash Wee, General Manager at VCNC, the company behind the Korean couples app Between. That’s right, the cutesy sticker-filled app full of sap and love and #relationshipgoals, where couples collate photos, have a private chat space, and countdown to every one of their anniversaries.

Nothing about this seemed appealing to me. While my boyfriend and I are pretty comfortable in our relationship, big shows of affection are a turn off. The cutesy stickers and the compilation of our photos to gather our memories seemed awkward, unnecessary, and almost narcissistic. Couple apps were all those things and much more, and the thought of using it for two whole weeks made me cringe.

But someone had challenged me to 14 days on the app, and I was adamant to hate it. I was a stickerless WhatsApp user, and I didn’t even have Facebook folders of photos with my boyfriend. What could Between possibly have for me?

As part of the challenge, my partner and I had to complete 10 tasks via the Between app within 14 days. I was lucky enough that he agreed to do this challenge with me — he even deleted a game to make space for the app on his 16GB iPhone (bless him!). They were all simple enough, and I was skeptical that something as simple as uploading a photo could strengthen a relationship.

Nonetheless I got to work, and this is what I found out.

This is basically what a cover photo is to your Facebook account, except it’s for a shared “homepage”. Since the task recommended that I put a picture of the two of us together, I uploaded one of my favourite pictures of us — one where we were sleeping on a beanbag in the sun.

It got awkward and I stopped looking at the homescreen altogether.

2. Set your location to auto

This step was pretty easy to set up — simply tap on your icon and turn on the auto-location function to pull your location information into the app.

This auto-location is supposed to serve as a conversation starter, but I think it works pretty well if you’re one to keep tabs on your other half when they’re “working late at the office”. I’m not so concerned about where my other half is most of the time, so all it eventually served to do was drain both our phones’ batteries. We turned it off after two days.

Relationship Contribution: -2/5 (-2 for draining both our phones’ batteries)

3. Add a special day or two

We don’t have that many special days; just the one that we decided to call our “anniversary”. It just so happened to fall within the two-week testing period, so I was able to visually count down to our anniversary by the day. It was also pretty cute that they sent us a notification that said, “Today is Anniversary”.

Useful for special events and forgetful couples, I guess.

This was the most frequented function, which I had a woolly relationship with. When I was first introduced to the app some time back, the chat function was the only feature I knew about and tried, and I quickly got bored of it. By itself, the chat function is just like any chat app, but a lot less useful. After all, if you have another dominant chat app, what’s the point of using a separate one?

We spent the first week going back and forth from WhatsApp until we discovered the next thing on the list.

5. Have a Sticker Chat War

I thought I hated stickers. I thought they were too cutesy and over the top and I never bothered using the stickers in apps like Line much, especially to my boyfriend. He was very cheesed out by the stickers at first, feeling very awkward about the unfamiliar experience of sending cutesy images of little blobs that had no explanation for their appearance — Why do the weird blobs have faces? Why does the bird look nothing like a bird?

What eventually won us over was the cheekiness of it. I thought stickers were supposed to be cute and adorable and innocent. Yet, in Between, there was one animated sticker of a cutesy character spanking another. It made no sense. It blew my mind. And I was hooked.

My boyfriend was probably a little creeped out by the fact that I kept sending him spanking stickers, but he rebutted well enough with a cutesy character flashing another. And my, I loved him a little bit more then.

We don’t usually have many photographs together, since it was our anniversary, we booked a Staycation at a nice hotel with many photo-taking opportunities. Our photos together were horrible — we’re very bad selfie takers — but we did have a great collection of photos detailing how nice the place looked, and a private place to keep the photos.

The task encouraged us to write love notes to each other, and our attempt to do so was met with giggles and all around awkwardness. So awkward, in fact, that we ended up having a sticker war in the comments section, where I think the collaboration/communication was supposed to take place. Sticker wars are fun; love notes are not.

Instead, we made use of the space to write to-do lists and important things to note. Our sole note is a list of SG50 deals, which I insisted on storing there like the Singaporean auntie I am. Got deal must take.

There weren’t other “events” to share, so we started sharing random photos, like pictures of my sister’s cat, a stupid chat conversation we had, and videos we had of us randomly messing around. They’re not really “relationship goals” type photos and content, but they were stuff that mattered to us on some level, and which I felt painted a picture of what our relationship values were — family and fun. We don’t travel or club or take selfies at our happening dates at the hottest cafés and bars, but on Between, we didn’t have anyone to impress (or offend). It was pretty nice.

We saved the photos into the memory box, and never opened it again. Why is this here again?

9. Send a voice message through chat

This was probably the only task I didn’t complete, but only because my app completely glitched out when I tried to send a voice message. It’s probably because I’m on the iOS 9 beta (damn you!), but voice messages aren’t a new experience for us. I’ve used it on WhatsApp to send short voice messages from time to time, and I’m pretty sure the concept’s the same.

We didn’t have any home screen photos, so I changed it today to a picture of him trying out shoes at the store. He has yet to notice, but I bet he won’t be too happy about it.

While the tasks were useful, both of us agreed that the best feature of the entire app was the calendar, which was very helpful for us to share our events of the week with each other and plan when to meet. We’re both independent working adults with separate lives, and it’s much easier planning everything out so that we can be on the ball when it comes to each other’s schedules. This was probably the sole feature that kept us going through the 14 days, and the feature we’d miss most if we stopped.

When I asked my partner about his experience with the app, he shared that he would have preferred if he could automatically download all the media shared in the chat, the way WhatsApp allowed us to. I’m pretty happy with the way Between collates all our photos into an easy-to-view grid format, but I can’t argue against more functionality. I was surprised by the way he took to the stickers, but it goes to show that even guys can appreciate cute stickers in a private space with their girlfriends, especially when spanking stickers are involved.

This experience taught me one interesting insight — that every couple has a different way of operating. There are the sappy romantics, those who are comfortable sending love notes and taking a gazillion selfies together and need a place to store them. There are the chatty ones, who love texting each other and sending stickers for every emotion and situation possible. And there are the practical ones, who prefer the calendar feature and use the notes to write to-do lists and track expenses. Every couple has a different way of interacting, and, surprisingly, Between has something for everyone.

But no matter the reasons why, the fact of the matter is that I actually have become a Between convert. Though I didn’t expect to, I will continue using the app though the 14 days are over. Has it strengthened my relationship? I don’t have a definite answer for that. There weren’t any life-changing moments that tested our bonds, and I wouldn’t say I know what a strengthened relationship would look like. But we have stickers and a neat calendar to plan stuff, so you can say that the operations of our relationship have been enhanced by this app.

You win Between. I can’t believe it, but you win. Get the baptism ready.