DoThisWhen: The Messaging Recommendation Service For Those People Who Can Never Frickin’ Decide 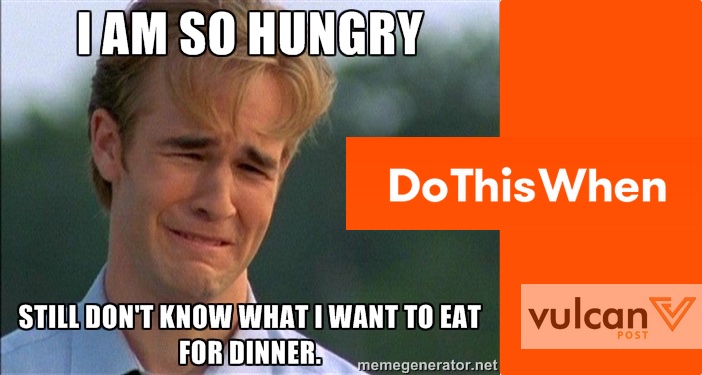 We’ve heard of personal assistants who will help you deliver what you need with a single text. But we probably wouldn’t have expected someone to start a messaging service that basically tells you where to eat, what films to watch, or what classes to learn.

DoThisWhen.com is just that. Made for the lazy, bored, or perpetually undecided, the messaging service is driven by the power of recommendations. The process is simple: simply send a message with the type of recommendation you want, the area, and your budget. For example, a $10 lunch recommendation would be prompted by “Eat Orchard $10”.

Who makes the recommendations? No one knows. Does it matter? Not really. After all, the point of the service is to assuage either sheer boredom or indecisiveness. Any recommendation will do; you just need a third party wildcard to do it.

We did a test to see how the service worked, and from the responses, it’s quite clear that the service is manned by actual people, causing just about any entrepreneur to scream “scalability” in their mind.

I sent my first message out at 8.10am trying to find breakfast places around my office, and was notified that I would only get one recommendation at “this early time”. Powered by what could be guilt, I received two more recommendations twenty minutes later.

Clearly, DoThisWhen is not a morning person.

I tried again at 11.42am, and this time the service took a mere 7 minutes to respond. I tried a much farther location this time, but that didn’t affect their speed in replying.

Learn, on the other hand, took much more time. On top of recommending food, DoThisWhen also recommends movies to watch and lessons you can pick up and learn. This response took a whopping 5 hours, coupled with a prompt, and offered classes that seem to have no correlation to the location I named.

When I asked what the basis of the classes were, DoThisWhen shared that they have limited support for location-based lessons, and thus the classes recommended won’t take your location into account. Still, I thought that 5 hours would have been enough to find something relatively close.

Despite taking most of the day to reply, it seems that the recommendations that DoThisWhen offers are of some standard, albeit one we have no knowledge of. I inquired further, and the respondent said, “We are impartial in our recommendations. We want the best for our users and not be influenced by advertisments or deals.”

So the next time you’re stuck deciding what to eat for lunch and need some random recommendation to get you going, you may want to try this out. Just for the heck of it.